Champions of Kamigawa: Way of the Warrior Review (Part 2 of 2) 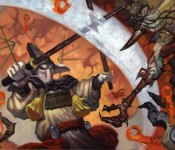 The yamabushi of Spiritbane are back, but this time they play the spoiler’s role piloted by Jimi. We’ll be putting the White Weenie Way of the Warrior through its paces to see how it performs.

Jimi begins our opener on the play and leads with a Mountain, while I field a Devoted Retainer off of an opening Plains. She’s not far behind for a creature, summoning a second-turn Battle-Mad Ronin, and it’s enough to freeze any thoughts I had about some early attacking dead in their tracks. Instead I add a Konda’s Hatamoto and pass.

Now turn 3, Jimi sends in her Ronin for a 1-point attack before following up with the Akki Avalanchers. I park a Cage of Hands on the Avalanchers to keep them quiet, then attack for 2 with my Samurai. Next turn Jimi again swings with the Ronin for 1, taking me to 18, then she adds a No-Dachi before passing. I keep the attacking going with another swing from my Samurai, then add a Mothrider Samurai to the fray.

Undaunted, Jimi sends in the Ronin for another point of damage on turn 5. With bushido 2, it’s a tough one to block. She follows up with a Frostwielder and passes. Back to me, I gird my Mothrider with Vigilance before sending in the side to pepper Jimi with hits. She’s now down to 12 life. Back to her, she pings the Mothrider with the Frostwielder, then looks to kill it with a Crushing Pain. I snap off a Blessed Breath to save it, giving it protection from Red. This is extra-damaging to Jimi’s cause as she very reluctantly turns her Battle-Mad Ronin sideways, running into the waiting arms and loving embrace of my now-protected Samurai, killing it. Over to me, I follow up with another 4-point attack but have nothing else to play.

Jimi finally picks off my Devoted Retainer with the Frostwielder on turn 7, then summons a Ronin Houndmaster. She equips the No-Dachi to it, and swings for 4 to put me to 13. Next turn I counterattack for 3, leaving Jimi at 5 and losing a race I’m sure to win. Jimi arrives at the same conclusion, so she keeps her Houndmaster at home on turn 8. Her turn otherwise is similarly devoid of activity. Next turn I attack with only the Mothrider, but Jimi tries to burn it out of the sky with a Hanabi Blast. Forgetting her Frostwielder for a moment, I try to save it with a Call to Glory, keeping it up just a little longer. Jimi’s Blast resolves and goes back to her hand, and there is only one other card with it. Jimi holds them up, I pick one… and it’s a Mountain. Jimi happily re-Blasts the Mothrider to kill it, then pings me for spite once she remembers the Frostwielder herself.

I’m running out of options, and haven’t had much opportunity to take advantage of Cage of Hands. Against Jimi’s deck, which is largely empty of a single, looming threat but instead comprised of weenies, one beater is as good as another. With the calculus of battle having shifted in her favour, Jimi swings for 4 with the Houndmaster, leaving me at 8. She adds an Akki Avalanchers and passes. My next turn is a blank, though the Frostwielder pings me down to 7. On turn 10 she attacks with her Houndmaster and Avalanchers, and I trade my Konda’s Hatamoto for the latter. With the hit and another ping I’m nearly dead, and scoop after drawing nothing.

I get a slower start this time around beginning on the play, while Jimi leads with Akki Avalanchers followed by an Akki Rockspeaker after an opening attack. I close the door on turn 3 with my Kitsune Blademaster, though it takes Jimi a turn to figure it out as she overlooks my Blademaster’s bushido 1 in playing a Battle-Mad Ronin (or is simply hoping I’ll press the attack). 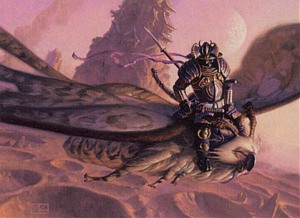 It’s a moot point when on turn 4 I add Vigilance to the Blademaster, allowing it to swing in for 2 and kill her Ronin next turn when she’s forced to attack with it. Jimi grumblingly adds a No-Dachi to the table before passing. Next turn I attack for another 2 and end my turn, while Jimi plays a Frostwielder.

Hitting my fourth land drop on turn 6, I attack for the usual 2 then add another Kitsune Blademaster. Trouble looms, however, when Jimi lands a second Frostwielder the same turn. Back to me, I cut in for another 4 damage with the Blademasters to take Jimi to 10, then draw a break when Jimi pings me with the non-summoning-sick Frostwielder for 1. I go down to 18 life, but it allows me to Reciprocate the offending pinger, preventing my Bladesmasters from coming into the crosshairs. Once it’s Jimi’s turn, she pings my Blademaster and attempts to finish it with a Crushing Pain, but again I thwart her with Blessed Breath.

Now turn 8, my Blademasters go about their business with grim efficiency, leaving Jimi at 6 life. For her part, she looks for redemption from Kumano, Master Yamabushi, pinging me again with her Frostwielder before ending her turn. When I come in for another 4, she has little choice but to block with her mighty legend, letting me claim another scalp when I flash in Indomitable Will. The other Blademaster gets chumped by her useless Rockspeaker. Back to her, she plays Kumano’s Pupils, perhaps arriving to mourn their fallen master.

I attack in for another 5 on turn 10. Jimi chumps with her Avalanchers to reduce the damage, but still ends up at 4 life. She pings me down to 16- I have another Reciprocate in hand, but am not worried about just one Frostwielder as yet and save it. Next turn she equips the No-Dachi to the Pupils, sending them into the red zone for 5 to try and put some pressure on me. I’m down to 11 life, and she follows up with a Ronin Houndmaster before passing. The stall game continues into turn 11, but the game is brought to its conclusion when I deploy a Mothrider Samurai. Jimi can congest the ground for a time, but has no defenses against it and finally succumbs.

The game gets out of the chutes quickly for our final bout as Jimi leads with a Mountain, I follow with a Devoted Retainer, and she raises with an Akki Rockspeaker and Akki Avalancher. The Retainer’s bushido allows it to pass unmolested, and the first point of damage lands at the tail end of turn 2.

Now turn 3, Jimi deploys a Kusari-Gama and passes after a 2-point attack, while I attack in again and follow up with a second Devoted Retainer. Back to Jimi, she equips the Kusari-Gama to her Avalanchers and sends them in to attack. I opt to let them pass and go down to 17. Then I neutralise them with a Cage of Hands before sending in the Retainers for another 2-point slice.

Jimi adds to her arsenal on turn 5 with a No-Dachi, which immediately gets equipped to the Rockspeaker. The Rockspeaker then gets turned sideways, and I’m down to 14 life. This time I only send one Retainer back across the table, whittling Jimi down to 15. Jimi next equips the Kusari-Gama to her now heavily-armed Rockspeaker and attacks. With my one Retainer free to block, I have him step in front of the Akki then respond with a Candles’ Glow to keep the Retainer alive. It kills her Goblin, but I do lose my other, tapped Retainer thanks to the damage-spreading capability of the Kusari-Gama. Having steadily hit my land drops, however, it’s little loss as I replace it with a Samurai Enforcers. 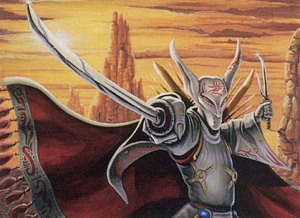 She then adds the No-Dachi on turn 9 to her girded Frostwielder and swings for 4. It’s a pyrrhic vistory of sorts as I exile the offending yamabushi with a Reciprocate. The other pings me in revenge, and I’m down to 9 life as well. I get ahead with the Mothrider after another attack, then add a Konda’s Hatamoto. Jimi- who has been land-light all game- swings for 3 with a Frostwielder after equipping it with the No-Dachi. She summons a Brothers Yamazaki then ends her turn. I attack again with the Mothrider and add a Kitsune Blademaster. It’s now right down to the wire, 5-6 in my favour.

Now turn 11, the Kusari-Gama gets put in the hands of the Frostwielder, when then charges through the red zone. I block and trade with my Kitsune Blademaster, but the Kusari-Gama wipes my board. Checkmate. Jimi follows up with an Akki Coalflinger, and I next manage a Devoted Retainer, but my back is broken and it’s only a matter of time before I fold.

White Weenie, like Blue/White Skies, is an archetype that seems to come up with displeasing frequency in the preconstructed world, though it’s a hard one to argue against. The strategy of flooding the board with cheap, aggressive creatures is one that has proven itself over the course of time to be quite effective, and given White’s solid complement of removal and combat trickery it isn’t one likely to go away any time soon. From Intro Packs (Myr of Mirrodin, Kor Armory) to Duel Decks (Elspeth, Knights) and on through Event Decks (War of Attrition, Hold the Line) and Theme Decks (Little Bashers, Hope’s Crusaders), we’ve certainly seen our share of them, and there are more to come.

In light of that, it’s always worth a little something when the deck manages to bring some novelty to the table. Another way to say that is, if you’re going to play just one White Weenie deck this season… Which deck to pick? A lot of White Weenie decks tend to be fairly generic with the card lists. In addition to providing the Elite Vanguard with a steady paycheck, they include the same or similar amounts of the same or similar types of cards, with some equipment thrown in for good measure.

The flavour of Way of the Warrior is solid, but the real gem here is the bushido mechanic, and that’s what really sets it apart. From top to bottom, being able to have your early creatures punch above their weight is very effective in getting that crucial early damage in, and that’s where bushido shines. Weenies are generally susceptible to stalling trades, where your opponent offers up some random 1/1 mana dork after its outlived its usefulness, and longer games tend to go against this archetype. By offering a mechanic which made such trades less favourable for your opponent, they gave a real power increase to the strategy and a novel and fun twist on the tactic. Mechanically, Way of the Warrior delivers.

Naturally, there are a few selections here which are less exciting- Vigilance in particular isn’t a card you’ll be too excited to draw very often. But by and large its a very solid collection of 60 cards, and having one of the deck’s two rares be a combat trick (Hold the Line) gets marks on both sides of the ledger. It’s an exciting and fun card capable of blowouts, but it’s also one that exerts pressure on its pilot to play defensively to maximise its value. Putting the brakes on this sort of deck is always done at your own peril. Another of the deck’s more interesting cards- Bushi Tenderfoot– sets up a very fun and rewarding little mini-game of trying to get him to flip. Overall, this was a cut above what we’d normally expect from a mono-White aggro deck.

Misses: Combat trick rare rewards the opposite of what this deck should be doing and promotes “BCS” thinking (“”best-case-scenario, a concept frequently explored on the superb Limited Resources podcast); too many noncreature spells put a brake on the deck’s speed, though as always one has to wonder if this is a flaw in the deck or simply precise design for balancing