Welcome to Scars of Mirrodin!

The newest block is upon us, and leading the way are the five new Intro Pack decks showcasing the themes and elements of the set. Indeed, acting as a illustration to the concepts and designs of a given set are one of the things that these decks do best, and all early indications are that the Scars block has raised the bar in relation to past releases. Today we begin our block of reviews with the mono-White Myr of Mirrodin deck, which in keeping with recent convention gets to carry the banner of Scars’ Tribal deck.

In looking over the decklists for the five, the first thing that jumped out at us was the finer eye that Wizards turned towards minimising variance, that great enemy of consistency- a most welcome change! For those of you unfamiliar with this concept, permit us a small explanation. Otherwise, feel free to skip past the indented section.

Minimising variance is one of the most paramount goals for a successful Magic deck, because it allows you to consistently yield the results that you’re looking for the deck to produce. If your deck needs a Lightning Bolt, you want to make sure you’ve got every chance to draw it, so you play four of them. Want to get that Leyline out as often as possible? Put one in, and you’ll get to play it about 12% of the time. Throw in three more, and you’ll have one nearly every other game- which would you prefer?

Even apparently singleton formats like EDH take this into account. You might not be able to run a four-of, but certainly deckbuilders for these formats are looking at analogue cards (cards that are different but fill the same role, for instance Lightning Bolt and Incinerate) to consistently draw the effects they need, be it burn, counter, or what have you.

Naturally, variance is but one of several factors that must be balanced together. It’s an easy framework to pick 9 spells, throw four of each in a deck and call it good, but there are often circumstances where you don’t necessarily want to have four of a card floating around. Often with larger creatures which serve as your ‘closers,’ for instance, there’s a tradeoff between having less copies in the deck (frequently 2) and having extra time to draw one of them. Having one in your opening hand is frequently the same as a mulligan, and thus to be avoided.

Statistical analysis in Magic is a nuanced business, which speaks well to the intricacy of the game. Quite often if examined in only one way, appearances can deceive, necessitating a fuller look. For example, looking at the mana curve of our Mad Machinist’s Mash-Up you might think us quite mad indeed to pack in so many creatures that have a converted mana cost of 5 or more… until you realize that half of them had Affinity and would typically be cast for quite less. Looking at a deck that was full of early drops but with little late-game support, you might fail to see that it actually has more staying-power than your typical Weenie/Swarm strategy thanks to the many critters with Multikicker, giving them increased power and toughness when drawn later in the game.

Similarly, then, we must be equally cautious when quantifying consistency, because as mentioned above a scenario where you have a 4×9 deck isn’t always optimal. But to gauge the very welcome move towards having a more consistent spellbase, compare Scars of Mirrodin to M11. M11’s precon decks had an average of 24 unique non-land cards in them. Scars of Mirrodin, on the other hand, had only 21.2, a change of a modest but respectable 12%. But let’s assume that a deck can have no fewer than 9 unique cards in it (sorry, Relentless Rats) and use that as our baseline by subtracting 9 from the unique card count for each deck and now we’re nearly hitting a more telling 20% increase in consistency. That’s the Scars difference, and you’ll see it quite clearly as we begin to deconstruct Myr of Mirrodin. 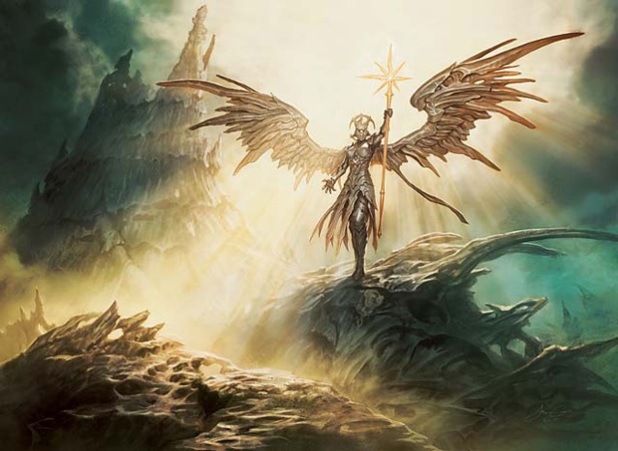 Powers Even Greater Than Phyrexia

A look at the mana curve for the creatures of Myr of Mirrodin reveals an almost poetic sight:

Here you have the metallic denizens of an artificial plane, and a lovely curve. 8-8-2-4 has a certain mathematical resonance that just feels right for the deck, in addition to providing it a very solid ‘White Weenie’ base strategy. Additionally, the deck does something else rather uncommon in White Weenie: it ramps!

You’ll have little trouble getting your closers out with three Gold Myr and two Palladium Myr to boost you through, and being a mono-colour deck means you should reliably be able to play your hand making this undoubtedly one of the most consistent deck builds we’ve reviewed thus far. But let’s take a closer look at what the deck is trying to accomplish.

In the main, the deck’s strategy is simple: generate an early rush of cheap Myr, then finish your opponent off with one of your closers. In addition to the mana-producing Myr, the Tribal element runs strong here. You have a pair of Myrsmiths, cranking out a Myr each time you cast an Artifact spell. Two Perilous Myr act as ersatz burn, while a pair of indestructible Darksteel Myr are a bit pricey at three mana, but have their uses (particularly on defense). Three Origin Spellbombs make a perfect turn 1 drop, giving you the option to get another Myr token onto the battlefield and netting you a card, while one of your closers- the Myr Battlesphere– brings along four of its own. Finally, the deck smartly includes a pair of Myr Galvanizers, the ‘Lord’ of the tribe which pumps each other Myr up and allows you to untap them. Including both gives you the possibility as well of getting out the much-ballyhooed ‘infinite mana’ combo with the Palladium Myr (though no real ways to spend it all).

Outwith the Myr, there’s little left behind. There’s a sniff of the new Metalcraft mechanic with the Auriok Edgewright and pair of Ghalma’s Wardens, a token air presence in twin Kemba’s Skyguards and a Razor Hippogriff, a Darksteel Sentinel and the deck’s most feared card, Sunblast Angel.

The Angel is one of those rare Magic cards that can have a severe psychological impact in addition to real power at the table. Against all but the most passive or controlling decks, she’s almost guaranteed card advantage, and because your aggressively-minded opponents will natually be swinging in with their best creatures. This isn’t Darwinism at work here, where the sick and infirm are the ones who get culled, but rather one that can destroy their best and brightest. With luck, after an exposure or two you may even find your opponents second-guessing or hesitating to commit once you start hitting that 6-mana mark, so it is more imperative than ever to try and hold a card in your hand at all times, even if it is just a Land, to play upon the power of suggestion.

This is, of course, a mistake, as a skilled opponent will not let the possibility of the Angel deter them from being as aggressive as they can be to destroy you. Even if every game you play went to an average of ten turns, you’ll only be seeing the Angel statistically every third or fourth game. Suggest the Angel whenever you can against susceptible opponents, but don’t rely on her- she’s as fickle as her singleton fortune dictates she must be.

Fortunately, the consistency of the Creature selection is the rule and not the exception, for the noncreature cards are just as solidly chosen.

Aside from the aforementioned Spellbombs, all of the noncreature cards in the deck are White Instants or Sorceries, with some Aura-based removal. Indeed, the spells are refreshingly either removal or combat tricks, and nothing else.

Two Seize the Initiatives and Inspired Charges are the extent of your tricks, so don’t count on getting more than one per game. The Initiatives are almost fully removal themselves- a +3/+3 Giant Growth can get that last bit of damage in, but a mere +1/+1 usually won’t be enough. Lean on it more for its ability to grant First Strike and deny your opponent a trade with one of your attacking or blocking creatures. Inspired Charge is a nice ‘finisher’ card if you’ve managed to get a lot of Weenies out and have enough board advantage to get your swarm through, though I’m generally not high on the card itself at four mana.

As relatively useful as the combat tricks are, it is the removal that really shines. First, you have three Arrests, allowing you to completely shut down an enemy’s threat or utility creature. Pacifism has always been a solid card to take out enemy combatants, for a mere one mana more this Masques/Mirrodin reprint’s augmented ability to nail their utility dorks is well worth the cost.

The trio of Revoke Existences are also very strong here, especially considering the amount of Artifact Creatures you’ll be up against in the other Scars preconstructed decks. It’s very flexible, exiles rather than destroys and is a steal at two mana- about the only gripe you could have is that it’s a Sorcery, but then at that price you can’t have it all. Finally, the singleton Dispense Justice is a very conditional answer that some games will net you their best attacker(s), but other games will sit in your hand way too long because your opponent keeps swinging in with dorks or bears and you don’t want to “waste” the spell on 1/1’s or 2/2’s.

Here’s how the deck looks overall:

Overall, this is a remarkably consistent deck that seems to have a solid power level, and marks a welcome direction for the design of the preconstructed products. If M11 had too much of the “one-of-a-bunchastuff” philosophy, and the forthcoming Event Decks are held solidly to Constructed’s standard, Scars of Mirrodin’s decks seem to strike out on a middle path: not so wildly variant as their recent forebears, but also with room to tinker, toy with and improve upon for the aspiring deckbuilder.

Come back in two days’ time, and we’ll be sleeving up the deck to see how it operates in the field!