When we first began the Preconstructed Deck Championships a year ago, we knew we wanted to get to a place with it that engaged you, the reader, but we weren’t quite certain how. We gave it some further thought the next time, for the 2009-10 Champions, and were encouraged when a number of you continued to leave predictions for each match. Third time lucky, as they say, we’re thrilled with the format- and turnout- for this inaugural contest event, and you can be sure we’ll be doing it this way going forward.

END_OF_DOCUMENT_TOKEN_TO_BE_REPLACED

Welcome to the final installment of the 2010-2011 Preconstructed Deck Championships! It’s been a heckuva ride this far, with a full field of 32 decks at the outset now whittled down to a Final Four. Most remarkable was the resurgence of the Duel Decks. From their strong showing in the 2009-10 season, they fell far short of expectations in the following 2008-09. This time they came back with a vengeance, and now we have the exciting prospect of an all-Duel Deck finals between Knights and Elspeth. On the other hand, Archenemy would like nothing more than to smash Elspeth beneath a horde of reanimated undead, as Bring About the Undead Apocalypse stakes its claim to the title. And of course this season’s feel-good Cinderella Story torch is carried by Mirrodin Besieged’s Doom Inevitable. Usually the regular Intro Pack decks have solid representation in the finals, but this time there’s only the one.

END_OF_DOCUMENT_TOKEN_TO_BE_REPLACED 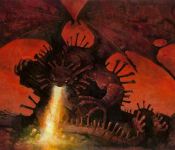 2010-11 Precon Championships: Final Round and the Leaderboard

At long last, we’re on the very eve of the Championship Final! This coming week-end will see this season’s winner crowned and installed in its rightful place alongside 2008-2009’s Dead Ahead and 2009-2010’s Eldrazi Arisen. Last week the field was narrowed down to the final four contestants. Infect & Defile trounced Mirromancy, then waited as Elspeth took down the Premium Deck Series, Fire & Lightning. Now we come to the final week as these two go up against Knights and Doom Inevtiable in the Rosewater Conference to see whose name will be etched in gold ink into the history books, and who will be just another footnote.

Last week’s predictions turned up some surprises as well. The players were about evenly split on whether Elspeth or Fire & Lightning would prevail, and so the final game of the division offered few points to our pedictors. Still, credit must be due to fillip who went 3-for-3 here, and has correctly guessed every match of the Lauer Division. This puts him as a longshot- to win he would have to guess all three of the final matches correctly, our frontrunner Icehawk would need to get all three wrong, and no-one else could get more than one correct. But hey, stranger things have happened, no?

END_OF_DOCUMENT_TOKEN_TO_BE_REPLACED

Welcome back to our ongoing coverage of the 2010-11 Precon Championships! We’re heading down the home stretch now with today’s event, the second-to-last in the season. Today we crown the last of the four divisional champions who will then square off next week to determine the winner. Today’s matches promise to be some of the most explosive thus far, as the Lauer Division is packed with power! We have an Event Deck (Mirrodin Besieged’s Infect & Defile), a Duel Deck (Elspeth), a Premium Deck Series deck (Fire & Lightning), and amongst these titans a mere moral will struggle to stay alive- Mirrodin Besieged’s Mirromancy Intro Pack deck.

Whoever wins today will go on to the Final Four, ready to face down Bring About the Undead Apocalypse for the change to make it to the Championship Match! Let’s head down now to the arena, where the first match is about to begin.

END_OF_DOCUMENT_TOKEN_TO_BE_REPLACED

2010-11 Precon Championships: Round 8 and the Leaderboard

Week by week we’ve been closing in on the final battle to decide the 2010-11 Preconstructed Deck Champion, and this coming week-end we’ll have narrowed the field of 32 down to a final four. The Nagle. The Tinsman. The Turian. Three divisions have anointed their chosen who will represent them on the field of glory. All that’s left now is the Lauer.

Every step of the way the readers have made their predictions for our giveaway, and we’ve tallied the points earned from each correct guess. It’s a close race, with the leaders separated by a single game. This past weekend saw furious opening round Lauer action as the Infect & Defile Event Deck trounced Magic 2011’s Power of Prophecy. Less expected was Mirromancy’s handy defeat of Phyrexian Poison, the infect-themed Intro Pack from Scars of Mirrodin. While the Blue/Red spell-heavy deck was celebrating its victory, Elspeth dismantled the Golems of New Phyrexia’s Artful Destruction. And closing out the day was the hotly-contested matchup between M11’s Reign of Vampirism and the all-foil Premium Deck Series entrant, Fire & Lightning.

END_OF_DOCUMENT_TOKEN_TO_BE_REPLACED

Welcome back once more to the 2010-11 Precon Championships! Today we begin the last of the four divisions- the Lauer! This season’s Lauer consists of a wide spectrum of decks. There are Intro Pack decks from each set in Scars Block, as well as Magic 2011. There’s also an Event Deck as well as a Duel Deck, and for a real wild card howabout the Premium Deck Series? With the other three divisions decided, all eyes are now here on the Lauer to see which deck will rise from the ashes of the rest to stake its claim on the Championship.

END_OF_DOCUMENT_TOKEN_TO_BE_REPLACED

2010-11 Precon Championships: Round 7 and the Leaderboard

Three down, one to go! That’s where the 2010-11 Precon Championships stands right now with regards to its four Divisions. Last weekend saw the Turian Division conclude with some of the most exciting precon action yet! First we had a battle of New Phyrexian decks with Life for Death making a valiant stand against the Event Deck Rot from Within. Although it had a few weapons at uits disposal, it was no match for the blistering speed of the mono-Green infect deck, and collapsed before its brutality as Trample Civilization Underfoot had done the round before.

On the day’s other match, the mighty Tezzeret couldn’t withstand the power of Archenemy’s Bring About the Undead Apocalypse. The graveyard recursion deck surprised many, who felt that Tezz’s artifact shenanigans would be enough to take him the distance. And when it moved on to defeat Rot from Within in a highly-charged clash to claim Turian Division’s pennant, more than a few were stunned by the upset.

END_OF_DOCUMENT_TOKEN_TO_BE_REPLACED

Welcome back sports fans and thrill-seekers of all ages! Today we have some exciting Turian Division action as we cut the field from four decks to one. The action promises to be hot and heavy as we have some of the field’s strongest contenders readying to do battle with one another for the right to represent the Division in the Conference Finals. Our first battle today is between two decks from New Phyrexia, but there the similarity ends. One of them- the favourite- is an Event Deck, Rot from Within, which put up one of the most dominating performances to date when it obliterated Archenemy’s Trample Civilization Underfoot in the first round. Aiming for an upset is Life for Death, the Phyrexian mana-fuelled Intro Pack deck.

END_OF_DOCUMENT_TOKEN_TO_BE_REPLACED

2010-11 Precon Championships: Round 6 and the Leaderboard

This past weekend saw us kick off the Turian Division in the Forsythe Conference, and it showed once again that you can never count any deck out. Our predictors did a great job this week, with a 61% accuracy rating- the highest in the competition so far. Still, the round was not without its share of upset. Nearly everyone guessed that the brutal Event Deck Rot from Within was going to dispatch Trample Civilization Underfoot- though the brutality with which it did so surely caught even this commentator by surprise. Most also rightly tabbed Tezzeret to prevail over Magic 2011’s Stampede of Beasts, making this a very black day for Green fat. And while it was a bit more divided, we still had a majority of predictors feel that New Phyrexia’s Life for Death would carry the day against Scars of Mirrodin’s Relic Breaker, and they weren’t disappointed.

END_OF_DOCUMENT_TOKEN_TO_BE_REPLACED

Welcome back to the exciting 2010-11 Preconstructed Deck Championships! We’re about halfway through our coverage with the Rosewater Conference now down to two remaining contenders, Knights and Doom Inevitable. They’re on hold for now as we move the action over to the Forsythe Conference’s historic Turian Division. We say ‘historic’ for while this is a relatively new competition, we’ve already crowned two champions for their respective seasons. The 2008-09 Champion, Alara Reborn’s Dead Ahead, came from the Turian and defeated two different Duel Decks– including a titanic final battle against Jace. Will the Turian prove to be the spawning ground of champions? Or just another contender?