Posts from the ‘Ajani vs Nicol Bolas’ Category

Our second tilt with Duel Decks: Ajani vs Nicol Bolas sees the roles reversed this time, with Sam taking on the piloting of Bolas. In our last matchup, you might recall that Sam had me handily beat two games to one, though in the third her Ajani deck never had a chance. Would that trend continue, or would we see the decks pan out as evenly matched?

END_OF_DOCUMENT_TOKEN_TO_BE_REPLACED

Our opening game of the Duel Decks: Ajani vs Nicol Bolas, I had no trouble at all finding an eager opponent. With Sam’s two favourite planeswalkers being the ones in this set, she already had her playmat and spindown die set up before I even broke out the decks. As we found in our analysis, the decks offered early-game advantage to Ajani, while Bolas steadily rose to power the longer the game went on. Would I be able to  hold off the Nayan assault long enough to give His Draconic Majesty a chance?

END_OF_DOCUMENT_TOKEN_TO_BE_REPLACED

A young man of seemingly unassuming destiny ekes out a living away from civilisation in a perilous land. Although it will take him awhile to fully understand and awaken, there is a power lying dormant within him, and a great destiny to go with it. He might have continued to live an otherwise quite ordinary life, but fate has other plans. When his family is murdered by agents of a great and maelvolent evil, a chain of events is set in motion that will see him awaken the potential that has lain dormant within him.

But his powers are raw and unfocused; it takes the guiding hand of a mentor to allow him to learn how to exert control over them. He struggles with the blinding, corrupting forces of rage and aggression. In a harrowing battle against his adversary he then finds himself gravely injured. Nursed back to health, he rises stronger than before. In full command of his powers, he seeks out the shadowy villain behind the corruption and destruction of most everything he has held dear, and emerges triumphant. Our hero today is none other than…

END_OF_DOCUMENT_TOKEN_TO_BE_REPLACED 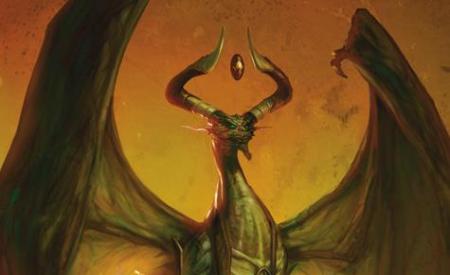 It was less than a year after the birth of the game of Magic: the Gathering that today’s antagonist was born, giving him a far longer existence than a particular Nacatl from Naya. While Planeswalkers (as a card type) were many years away, even then in his ‘weaker’ incarnation he still commanded reverence and respect. He was Nicol Bolas, and he was an Elder Dragon Legend.

Legends was released in June 1994, and was the largest set release to date. Revised Edition came closest at 306, only four cards shy- but it’s worth noting that unlike Revised, Legends did not contain any basic lands. It was an exciting and heady time to be playing Magic- after the release of the core set(s) and the Arabian Nights and Antiquities expansions, here was a whole new and massive set filled with mechanical innovation. A few of these would settle into comfortable obscurity: bands-with-other (a selective form of banding), rampage, world enchantments, and poison (which, as we know now, would see a triumphant resurrection only with the release of Scars of Mirrodin). Two of them would become integral parts of the game as played today- multicolour cards and legends.

The legends of Legends may seem by the modern eye to be a motley crew of overcosted, underpowered, context-less and disorganised individuals, but that was indeed hardly the case. To be fair, this was bold, new ground. The game was still in its relative infancy, and the degree to which being “legendary” was a drawback was not yet fully known. Nor yet was casting cost as understood as it is today. Gosta Dirk is a 4/4 first striker with a marginal ability (negating islandwalk) priced at seven mana, and there are other such examples, like Jedit Ojanen. And while there was no context for these legends, that was part of the appeal. Narrative arcs over sets was at best a vague overlay (such as in Antiquities)- it would take another three years to marry a card set with a concrete story in Tempest. These were figures of your imagination, and wondering who and what they were only added to their allure.

END_OF_DOCUMENT_TOKEN_TO_BE_REPLACED

Today on the mothership, the box art for the forthcoming Duel Decks: Ajani vs Nicol Bolas was revealed. Also shown are the two new alternate-art planeswalker cards themselves, putting an end to the speculation as to which version of Ajani would drive the deck (hint: Boros).

Head on over and check it out!

Wizards today announced what we all knew was coming- Duel Decks: Ajani vs Nicol Bolas. What may be a surprise is discovering which version of Ajani will be included in the deck: Ajani Goldmane or Ajani Vengeant. We won’t know for awhile, but in the meantime head on over to the mothership and take a look.