Posts from the ‘Zendikar Block’ Category

Whispers of the Muse: Steven T’s ‘Reign of the Bloodchief’

After a trip back in time to Tempest last week, we’re back with something more familiar and contemporary for this week’s Whispers. Today we’re hearing from reader Steven T. Steven has a request with a slight twist, one that should be familiar with readers of our previous Ertai’s Trickery feature, where we blended several decks together:

I’ve recently started playing Magic: the Gathering. I built myself a Vampire-themed deck by mixing together Reign of Vampirism from M11 core set and Fangs of the Bloodchief from Worldwake. I’ve been trying to find the third vampire precon called Rise of the Vampires (or something like that) so then I can tweak this deck a bit more.

I’ve played with this deck a few times and found that Captivating Vampire doesn’t pull his weight around in comparison to Anowon. However, I attribute this to everyone making sure I didn’t have 5 vampires on the battlefield at one time. Also I was thinking about swapping out the 4x Assassinate for 4x Go For The Throat. I’d like this deck to remain a mono-black. However, I’m happy for people to suggest a secondary colour. I’d like to keep this deck an aggro deck as well, but again i’m happy for other suggestions. Also I only play casually so I’m not really looking for a tournament standard deck.

Here is the preliminary decklist.

END_OF_DOCUMENT_TOKEN_TO_BE_REPLACED

Whispers of the Muse: Mart’s ‘The Adventurers’

Welcome to the next installment of Whispers of the Muse, the occasional feature where a reader submits their tinkering of a precon deck and look for constructive criticism and feedback from the community. Today we’re hearing from Mart, who’s begun working on Zendikar’s The Adventurers.

Mart’s main area of concern is this:

anyone care to comment on it and help me tighten it up? perhaps even help me figure out how to properly shape a deck based on land and CMC since i really have no clue how to do that…

END_OF_DOCUMENT_TOKEN_TO_BE_REPLACED

At last, our final foray into the plane of Zendikar begins! Having now covered all three sets of the block, it’s time to say goodbye in fine form, and to do so we’ve settled in to play our last three matches for the review. Natually, I’ll be piloting Brute Force, while Jimi has taken it upon herself to pilot Mysterious Realms. We’ve enjoyed reviewing the block, and hope you’ve enjoyed the journey alongside us. Here are the game notes for this final confrontation.

END_OF_DOCUMENT_TOKEN_TO_BE_REPLACED 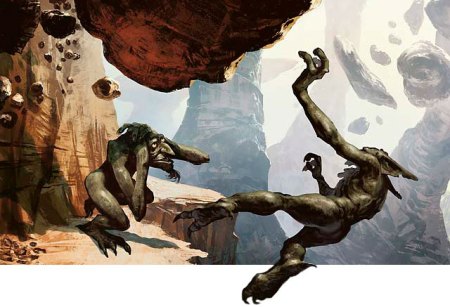 One of our oft-repeated problem with Zendikar’s preconstructed decks has been that the core set content was far too high- when close to half your cards are from Magic 2010, it’s a bit harder to get a feel for how Zendikar’s supposed to feel. Our other major complain was that the set’s mechanics were underrepresented. There was landfall to be certain, and Allies were championed in The Adventurers, but traps and quests were so absent as to be scarcely recognisable as a theme, let alone a major one.

In some ways, Worldwake addressed these imbalances, as we’ll see in Brute Force, a Red/Green beats deck and our last stop in the world of Worldwake, though it would not be until Scars of Mirrodin that a very visible break in the set’s funadamental composition became evident.

END_OF_DOCUMENT_TOKEN_TO_BE_REPLACED

Worldwake: Fangs of the Bloodchief Review (Part 2 of 2)

From the highs to the lows and everything in between, this match was set to be an interesting one. Jimi selected Flyover as her deck to pilot, while I of course were behind Fangs of the Bloodchief. With Flyover happy to get some early stall, would the aggressive Vampires be able to come out of the gate fast enough before Jimi’s aerial forces were able to marshal an effective counter? We sat down for the customary three matches to find out, and here are our notes.

END_OF_DOCUMENT_TOKEN_TO_BE_REPLACED

Worldwake: Fangs of the Bloodchief Review (Part 1 of 2)

Last August we began our review of Rise of the Vampires, the Zendikar Vampires-themed Intro pack, by noting that the tribe was something of a last-minute addition to the set. “The model was successful enough,” we continued, “that Wizards would go on to recur it in Worldwake, which featured an updated version of the concept.” Rise’s strategy was precisely what you’d expect from such a deck- a fast, aggressively-positioned creature rush backed up by removal to blow your opponent away before they had a chance to solidify a board presence.

Perhaps they grew weary, though, after having the sand kicked in their face one too many times, for Worldwake’s Vampires headed to the gym to beef up a little before being boxed up and shipped. Make no mistake- there are far more similarities than differences between the two, but there are differences indeed and they are telling. Although we’ll be reviewing Fangs of the Bloodchief, we’ll also be exploring how this deck diverged from the last, for therein lies the message of Worldwake: things are getting worse.

END_OF_DOCUMENT_TOKEN_TO_BE_REPLACED

In our previous column (Flyover Part 1), we approached the review from a different angle, breaking through the ‘fifth wall’ and presenting a review as seen from the inside. It was enjoyably received, but alas there’s little we can do comparably for the playtest segment of our review. Here, most everything’s transparent from the start!

To test Flyover’s aerial goodness, I was joined by Jimi, who had selected Brute Force as her weapon of choice. Here are the notes from our review.

END_OF_DOCUMENT_TOKEN_TO_BE_REPLACED

Every deck wants to tell you something. It seems obvious, but you’d be surprised how many people look through a stack of cards and don’t seem to pick up on what it’s trying to do. To be fair, it’s not always easy to see, but there are certain broad-based themes that can go a long way towards helping you grasp the concept behind a deck, and in today’s feature we’re going to do something of a meta-review. Not just a straightforward Ertai’s Lament review, but a breakdown of what we’re looking for, and how we arrive at the conclusions we do.

The subject of today’s deconstruction is Flyover, a Blue/White assemblage from Worldwake. Away we go!

END_OF_DOCUMENT_TOKEN_TO_BE_REPLACED

We’ve reviewed Zendikar. We’ve covered Rise of the Eldrazi. And even before these we had immediate coverage of Scars of Mirrodin and Magic 2011. Finally, with the tackling of Worldwake, we’ll have every Standard-legal set sorted out before Mirrodin Besieged is released early next month. It’s a pleasing realisation, even as the mind wonders that at the current rate of review if we’ll ever actually run out of precons while waiting for new ones!

It’s in that spirit of exploration that Jimi and I took out customary places opposing one another on the battlefield that is the kitchen table. Deprived of her preferred option (Rapid Fire), she instead sought to console herself by smashing it with a mono-Black flurry of Vampires.

Here are the notes from our confrontation.

END_OF_DOCUMENT_TOKEN_TO_BE_REPLACED

Just as Shards of Alara introduced terms for three-colour blends into the game for decks composed of a colour and its two allied colours (ie- Black plus Blue and Red = ‘Grixis’), so too did Ravnica just a few years before. In Ravnica’s case, these were two-colour blends, and based on guilds in the set’s setting there was a term for every possible combination. Interestingly, of the ten guilded colour pairings, only Boros has truly survived into the modern-day common parlance. That’s not to say the others have faded to utter obscurity, but rather when we talk about the rise of Blue-Black in today’s Standard meta, we’re quite unlikely to hear the word “Dimir” used.

Now as then, Boros decks tend to maximise the strengths of both colours using cheap creatures backed up by a burn package. When the designers of the Worldwake Intro Decks sat down to sketch their landscape of what the set’s decks would look like, they decided it was time for another Boros construction. There had been one in Magic 2010 (We Are Legion), but you had to go a little further back to find the last few as two of Alara block’s three sets released three-colour decks (the last set- Alara Reborn- went back to a two-colour model, but without a Boros amongst them). Lorwyn block had given us Battle Blitz, while Time Spiral block had featured Endless March. The Red/White machine was certainly due for an update!

And thus, Rapid Fire was born. A relatively straightforward beats-n-burn deck with a mechanical twist, we’ll begin our review today with the deck’s bodies.