Duel Decks- Knights vs Dragons: The Knights Review (Part 1 of 2)

“Dragons, my liege. Hordes of them! Hurry, the sky blackens!”

And so begins our tale, the story of the latest tribally-themed Duel Decks to hit the shelves of our local gaming store. Within the small, unassuming box a mighty contest rages, pitting the  tribe of the Knights against their immortal enemies- the Dragons. The Duel Decks series began with a similarly classic match-up of Goblins squaring off against Elves. Eighteen months later, we had our second non-Planeswalker themed release containing Angels and Demons. With 2010’s Duel Decks: Phyrexia vs The Coalition, though, the mould of the two mono-colour decks was broken, and the good news is that Duel Decks: Knights vs Dragons continues in much the same vein. Sure, you’ll find that the Dragons don’t deviate much from their expected mono-Red archetype, but as it turns out Green has as much to offer the Knights as White, and contained herein you find the best of both.

At its core, Knights offers little surprise and is about what you’d expect from the Knights: fast (and predominantly White) creatures, with a small minority of noncreature support cards. There can be little mistaking that this deck is built for the early game and starts on something of a clock. Fail to wrap up the Dragons deck before they can fully hatch, and the Knights’ prospect of victory drops precipitously.

As has become the norm for these sets, there is a reprinted card that has been upgraded to ‘Mythic Rare’ status. For the Knights, the lucky member of the tribe is none other than Conflux’s Knight of the Reliquary. Not a mythic at the time of its original printing, designer Chris Millar wrote that he selected the Knight of the Reliquary to occupy the mythic slot “because it’s a cool card, it provides interesting game play and deck building options, and it’s also very powerful and sees play in a number of competitive Constructed formats.”

With the table now set, we’ll go right into the main course: the Knights.

A New Breed of Guardian

As mentioned above, there are two dozen creatures in the deck, to the last a Knight. As you’ll see from the creatures’ mana curve, the deck is rather aggressively positioned:

Loading up on the 2-drop slot is about as aggressive as it gets. Not only does it ensure you quality early attackers, but it also lets you dump your hand with them quickly once you hit four mana on the board. You should have little difficulty establishing board presence in the early game here, and you’ll need to make every turn count.

Your trio of 1-drops are no mere wyrm-fodder, for each of them have the ability to get stronger in the longer game. Two Lionheart Mavericks begin play as 1/1 vigilants, but can pump to become 2/3’s if you have extra mana laying about (we’ll go out on a limb and say it’s pretty unlikely that you’ll get the chance to live long enough to be able to pump them twice, but you could). The Caravan Escort has the Rise of the Eldrazi’s level up ability, letting you get maximum value out of your land every turn. The Escort quickly becomes a 2/2 on his way to ending up a 5/5 first striker. Given the amount of instant-speed removal and combat tricks, it’s a card that has a certain amount of competition for resources, but can be useful after the right investment (ten mana in two-mana increments).

Next up we have our packed 2-drop slot with a wide array of options. Want more levelers? Two Knights of Cliffhaven have you covered, transforming from a simple 2/2 body into a Serra Angel. They are joined in the air by a Leonin Skyhunter, giving you a little extra reach or an emergency chump-blocker against a rampaging Dragon. There’s a touch of mana ramp in the Steward of Valeron, and a pair of prot-critters in the Silver and White Knights. The Silver Knight- with it’s protection from Red- is one of the strongest in the deck, while the same can’t be said for the White one. With the Dragons getting by free of Black creatures or effects, his protection is thematic and flavourful, but ultimately for decoration. See him as a 2/2 first striker and be happy. From there we have the Knight of Meadowgrain, another 2/2 first striker with an auxiliary ability- in this case, lifelink. That brings us to our last two 2-drops, both of them Rares.

The Knight of the White Orchid is frequently heralded as one of the game’s better WW-drops. Originally intended to be Realm Razer (as you can read here), its art was repurposed to be the Knight we know today. As a 2/2 first striker that can often grab a land when he comes into play, he can be a huge advantage for manabase development (especially considering that the Plains he fetches comes into play untapped). Finally we have the Knotvine Paladin, which essentially gives your other creatures an upgraded version of exalted. There’s a natural tension inherent in the card that only battlefield conditions will resolve, but it can very quickly get to a very impressive size. Note though that this ability triggers on attack only, so he won’t often be bringing down any Dragons on his own and living to tell the tale.

The aforementioned Knight of the Reliquary leads the charge of the 3-drops as a 2/2 that can both pump itself and fix your mana in the process. With the deck carrying two Grasslands and a Treetop Village, there might well be some land sitting in your graveyard to give your Knight a head start, but if not you can still grow her by +1/+1 a round while improving card quality by thinning the lands out of your deck. The Benalish Lancer’s kicker gives you two ways to play him: as a simple 2/2 (a poor deal for three mana) or as a 4/4 first striker (not much better of a deal for six mana, frankly, but that’s White for you).

Then there’s the Zhalfirin Commander, originally printed in Mirage and one of the older Knights in the deck. An early tribal gem, he pumps any Knight on the board, though it costs a decent chunk to do it. His flanking ability, consigned to the dustbin of Magic’s history, will give the Dragon player pause for thought when blocking. Shadowmoor’s Wilt-Leaf Cavaliers are fairly simple- a 3/4 body with vigilance- but features the hybrid mana characteristic of that block. Finally there’s the Knight Exemplar, whose ability to pump and render all your other creatures indestructible makes her one of the must-deal-with cards in your deck.

Heading towards the top of the curve, the stream of Knights begins to taper off. There’s another flyer in the Skyhunter Patrol, another leveler with the Kabira Vindicator (who pumps your entire army), the double-strike-granting Kinsbaile Cavalier, and something of a historical anomoly in the Alaborn Cavalier. Neither the Cavalier’s body (the customary 2/2) nor his ability (tap when attacking) make him all that unique. Instead, he represents a time and a place that Wizards has advised they likely won’t be returning to again. Here’s a hint- take a look at his armament:

You can have it when you pry it from his cold, dead hands

That’s right- GUNS! Some of the tribes of Portal II came equipped with firearms, and they certainly weren’t afraid to use them:

Of course, there wasn’t an actual mechanical component to wielding them (apparently the Alaborn Cavalier either intimidates or perhaps rifle-butts an enemy creature when it attacks), but they certainly looked cool.

Back to the task at hand, this brings us to the very top of the mana curve and the trio of beaters inhabiting it. Your Plover Knights are the most straightforward of the lot, being your last flyer in the pack and a first striker to boot. The Juniper Order Ranger pumps both himself as well as any creatures you summon while he’s in play, and is best to get out as early as possible to take advantage of his ability. Lastly there’s the Paladin of Prahv, a 3/4 body with lifelink before lifelink was a keyword. In addition, his forecast ability lets you use him while he’s in your hand, gaining an extra bit of benefit out of having drawn the card until you’re able to play him. (For more on forecast, check out our review of Azorius Ascendant).

All told, then, you have an army of Knights- many with first strike, most with secondary abilities, and a few that end up granting benefits across the board in a tightly-woven bit of synergy. Next we’ll turn our attention to the noncreature support that will help your Knights prove triumphant on the field of battle. 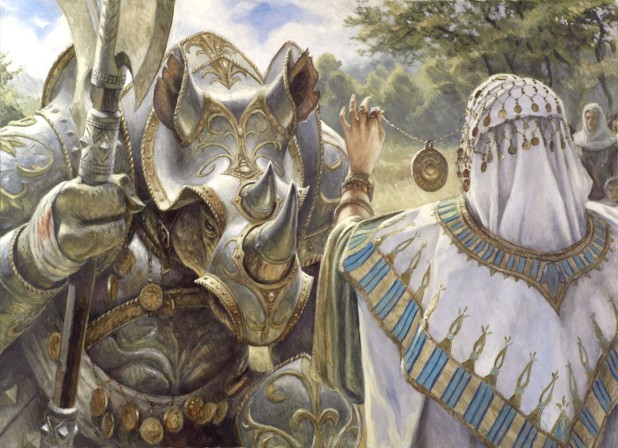 The Knight’s deck relies upon its quicker pace to flood the board with small beaters, hoping to overwhelm the Dragon player’s forces before they have time to properly establish themselves. Of course, this isn’t always possible to accomplish on the backs of creatures alone, so the deck carries a dozen noncreature cards to help keep things moving.

The first thing to bear in mind is that the Knights deck is very removal-poor. Indeed, you only get three pieces of spot removal to make do with. A Reciprocate is a cheap and ultra-efficient way to take a creature entirely out of consideration for the rest of the game, but the caveat is that it must have dealt you damage. An auto-kill for any one of your opponent’s Dragons can be found in the Alliances reprint Reprisal, at last given some very fitting art. Finally, a singleton Oblivion Ring can solve virtually any one problem on the board.

So if that’s all the removal you get, it’s up to combat trickery to get you the rest of the way there. In that regard, the Knights deck is packed with answers. Sigil Blessing pumps the side, Harm’s Way redirects damage, while Test of Faith combines both by turning damage prevention into a permanent power boost. There’s also a Mighty Leap which has the added bonus of granting your creature flying until end of turn- invaluable when facing large flying beaters that are hard for the Knights to square off with overhead.

Still, the deck’s thought of that, too. Griffin Guide gives on of your creatures flying (as well as some other goodies), while Spidersilk Armor gives reach to the entire team. Finally, a few odds-n-ends are present in the form of mana ramp (Edge of Autumn, whose cycling cost synergises with your Knight of the Reliquary), lifegian (Heroes’ Reunion), and the mighty Loxodon Warhammer.

In addition to the nonbasic lands mentioned above, the deck also comes complete with a single Sejiri Steppe (for temporary unblockability and untargetability) and two Selesnya Sanctuaries. And there it is! Sixty cards designed to bring down the scourge from the skies. In our next segment, we’ll be taking a look at the opposition- here be Dragons indeed!