Posts from the ‘Dissension’ Category 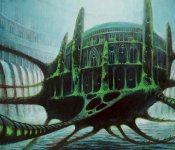 Having come full circle, Sam and I prepared to do battle with the final matchup of the Dissension set reviews: Simic Mutology versus Azorius Ascendant. The Simic certainly have a stronger fleet of creatures, but would they be fast enough to prevent the defenses of the Azorius from becoming too entrenched to cross? We shuffled the decks and prepared to find out. Here are our match notes.

END_OF_DOCUMENT_TOKEN_TO_BE_REPLACED

As one might imagine, no city with any hope of long-term growth would do well without some institutionalisation of medicine, and so it is with Ravnica and the Simic Combine, as represented in the Simic Mutology deck. According to the Guildpact, the function of the guild is medicine and health, but over time this has… adapted… somewhat to include medical research and mutation.

END_OF_DOCUMENT_TOKEN_TO_BE_REPLACED

Sam decided to operate a little out of her element and pilot Rakdos Bloodsport, the hyper-aggressive Red/Black deck against my Azorius Ascendant. Azorius was something of a trip through nostalgia-land for me, not because I was active in the game during Dissension (I wasn’t), but because my first decks at the dawn of the game tended to be White/Blue. Not so much the White/Blue Control archetype that we know today, but one that sought to enclose itself in an impregnable defense: Blessing, Moat, Circles of Protection, Farmstead and Ivory Tower were mainstays from White, paired with mainstays like Ancestral Recall, Counterspell, and Mana Short. Decks shamelessly ran past 100 cards, and constructing the perfect defense from which to hide behind and mess with my enemies was the crowning achievement of any game I was involved in.

Times have changed, and the closest I get to the Control archetype was with a Grixis/Cruel Ultimatum build. These days I’m most fond of Red and Black aggro builds. But from our analysis, I couldn’t quite shake the feeling that I was about to step back through time, after a fashion. Here are our notes.

END_OF_DOCUMENT_TOKEN_TO_BE_REPLACED 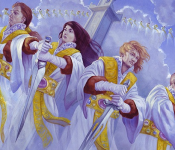 For our next visit to the city of Ravnica, we’ll be looking today at the ruling body of the city- the Azorius Senate. Naturally, a city needs a governing body to function, and the Azorius guild is Guildpact-bound to maintain that duty. They don’t enforce the laws (that’s the job of the Red/White Boros Legion), but they do legislate them. To the Azorius, they are all that stand between Ravnica and sheer lawlessness and societal breakdown. To the common Ravnican, they are pompous windbags stuffed to bursting with overinflated self-importance.

END_OF_DOCUMENT_TOKEN_TO_BE_REPLACED

When last we left Ravnica, we were exploring the Red/Black aggro guild of the Rakdos, with their Hellbent ability. Hellbent, both thematically and mechanically, seemed a perfect fit for the guild, a sort of “all-in’s all in.” But as one so often finds in this game, what seems amazing on paper doesn’t always translate well to actually playing. Not only is this a lesson the brave unfortunates of the Great Designer Search 2 have been learning the hard way, it’s also an important one for us to keep in mind.

And so, to find out for ourselves just how well Hellbent- and the Rakdos- played out, we sat down to throw the customary three games. Sam was my opponent of choice, and she opted to go to battle under the banner of the Blue/Green guild, the Simic Combine.

Here are the match notes.

END_OF_DOCUMENT_TOKEN_TO_BE_REPLACED

Following the decline in the game that many felt Kamigawa had represented, with its insular mechanics and over-emphasis on flavour- 2005’s Ravnica brought Magic back into a new renaissance. Set in a compelling world of ten competing guilds in a massive cityscape (one for each possible two-colour combination), it struck a near-perfect blend of flavour and mechanics. A great many of the cards in the set were watermarked with a guild symbol for added depth of narrative, and each of the ten guilds were assigned their own unique mechanic. While most have faded to obscurity, even today you’ll still hear some Red/White decks describing themselves as “Boros” just as three-colour decks take their names from the Shards of Alara (Jund and Naya most commonly).