1998’s Urza’s Saga had a number of superlatives associated with it, not all of them proud and glorious. For instance, Mark Rosewater has labeled the set his “biggest mistake” in his Making Magic column on the mothership, and even went on to add that this set “was is the only time in the eight years that I’ve been working at Wizards that R&D as an entirity got pulled into the president’s office and was yelled at.” It was also the first set of a block that would go on to have the most cards ever banned from organised play.

Whatever its failings, it does redeem itself in the preconstructed world with some intriguing firsts. Remembering that the previous year’s Tempest block was the first time theme decks had been introduced, Urza’s Saga could lay claim to having the first three-colour theme deck, the Esper-esque Tombstone. ANd while the nascent theme deck world had seen mono-coloured decks before (Exodus’s Migraine being the first), it had until then not seen a mono-White deck. Sleeper, however, with its gimmicky enchantments-that-come-alive theme, wouldn’t really be recognisable outside of the set it came along with. The first deck that would be recognisable as a “White Weenie” deck would not come along until 1999’s Mercadian Masques, and Rebel’s Call. Packed with a tribal “Rebel” theme, the deck flooded the board with small White creatures in an attempt to overwhelm its opponent in the early and mid-game.

With cards like Crusade and White Knight, the idea of a mono-White aggro deck surely had its genesis in the earliest days of the game, and it has proven to be one of Magic’s enduring archetypes. For the second time in their brief history, we find ourselves in possession of a White Weenie Event Deck, Innistrad’s Hold the Line. The previous deck, War of Attrition, was released for New Phyrexia and featured the Stoneforge Mystic. Her banning made the release of the Event Deck a bit awkard, as these decks are designed for organised, competitive play, but Wizards concocted a rather elegant solution. The Mystic would be playable, but only if someone was using the exact War of Attrition deck. While we have no such worries this time around, what we do have is a deck that seems to be even more aggressively constructed than the last!

War of Attrition looked to pair cheap, aggressive White creatures with Equipment and the living weapon mechanic to give the deck an resilience into the mid-game that aggro decks don’t always have. The two great risks of aggro strategies tend to be having their hand depleted before long, and seeing the red zone get too congested to continue to profitably attack through. By adding in the living weapons and Puresteel Paladin, War of Attrition gave the deck its durability. Hold the Line takes a somewhat similar approach, but ties the resilience package to a blisteringly fast swarm strategy. The deck is packed with creatures, half of which are one-drops. Let’s begin our examination with the deck’s beaters, then look to see how it supports them.

The deck begins with a few staples. Elite Vanguards have found no lack of employment in our tough economy, and are a frequent sighting in White-based decks. A re-skin of the once-rare Savannah Lions of yore, two power for one mana is a strong start, even with the lack of toughness. Magic 2012 also provides us with a playset of Gideon’s Lawkeepers, 1/1’s which act as ‘tappers.’ As mentioned before, red zone congestion is an occupational hazard for the archetype, where your opponent starts to deploy 2/3’s and 3/3’s which you can’t easily get past. Although they are somewhat reactive, they can certainly still help attack in for early damage before prying open the way for your other attackers.

From there we have some cards from Innistrad. The four Doomed Travelers replace themselves with an evasive 1/1 Spirit when they die, making them quite durable. Indeed, you’ll often be able to get a few extra points of damage in on your opponent because they’d rather not give you a presence in the sky by blocking and killing it. There’s also one of your deck’s rares here in the Champion of the Parish. One of the group of very strong and exciting White Human Soliders brought to us with Innistrad, they naturally should be the first card you play if you’re fortunate to draw into one in your opening grip. All 22 of the deck’s creatures are Humans, meaning you’re certain to get quite a bit of mileage out of the Champion. He’ll easily become one of your decks must-deal-with cards for your opponent.

Again, that’s eleven one-drops packed into Hold the Line. That gives some indication of the deck’s speed- but also its frailty. Moving up the ladder, we find four two-drops. First there’s an Elite Inquisitor, another of those Innistrad rare Humans mentioned above. This one is a bit more situational. Although a two-mana 2/2 with first strike and vigilance is a solid upgrade over the White Knight standard, his protection ability should be regarded as gravy. It’s great if it helps, but probably forgettable in many competitive situations as the Werewolves and Zombies have yet to make a serious presence. Also in this slot are a playset of Accorder Paladins from Mirrodin Besieged. As a 3/1, they’re almost certain to get chumped to death by nearly anything your opponent might have laying about on the first swing, so it might be helpful to look at them as removal and extra combat damage as a sorcery. Don’t hesitate to throw them away if it means some solid trades with your opponent’s creatures and extra damage- the longer the game goes on, the less your speed advantage will mean.

Lastly, we come to the three-drops, which is a phrase we’ve probably never written on Ertai’s Lament before. That’s right, these are your most expensive creatures on tap. A foursome of Fiend Hunters are a solid tempo play. Though their 1/3 body is perhaps underwhelming on first blush, these are creatures that you’d prefer to keep alive- the moment they die, your opponent gets their exiled creatures back. Not for nothing these are outside of Shock range, and that’s worth a slight downgrade on their attack power. You also have a pair of Mirran Crusaders here, twice as many as you had access to in War of Attrition. Their protection from Black will make them a bit harder to remove, and they’ll be able to either sidestep or blunt any Green-based creature threats your opponent might serve up.

In addition to the 22 creatures, Hold the Line boasts 14 supporting cards., which we’ll look at next. 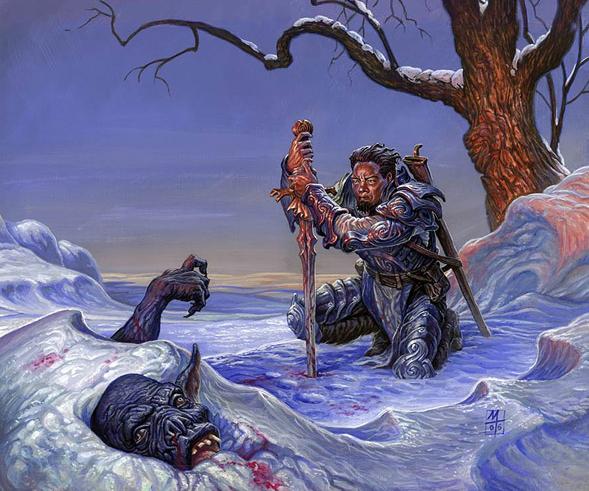 With any kind of aggro deck, it’s important that your noncreature support not try to be too fancy. Generally, you’ll want to focus on removing any obstacles that stand between your creatures and your opponent, letting your beaters pile on their efficient damage. Since mono-White lacks the reach of Red burn, it has to make sure it can keep the lanes clear. As it happens, Hold the Line is well-suited for the task.

First up is your removal package. Consisting of playsets of Oblivion Ring and Bonds of Faith, you should have little trouble stitching up your opponent’s creatures, unless your opponent also happens to be deploying a lot of Humans. If so, those Bonds of Faith will avail you little, and open you up to the traditional vulnerability of auras. Nevertheless, its a risk well worth running, though if you find yourself somehow in a Human-heavy meta you might consider Pacifisms instead.

There is some parallel with War of Attrition with the inclusion of equipment. Hold the Line comes ready with a pair of Silver-Inlaid Daggers and Butcher’s Cleavers. Equipment gives you the upside of auras without the rish of getting two-for-oned, and like most of Innistrad’s equipment, they are extra-potent in Human hands. Finally, a pair of Honors of the Pure will give you an inexpensive and immediate across-the-board boost, giving your army a little more stretch into the mid-game.

A World without Evil

The sideboard of Hold the Line covers the usual suspects reasonably well. You get a playset of the dependable Celestial Purge, up from a trio in War of Attrition. Against artifact-centric strategies (we’re looking at you, Swords), you also get a quad of Leonin Relic-Warders. They’re also good against Enchantments, though there are generally less of those worth sideboarding against.

A trio of Nihil Spellbombs are just the right amount to thwart decks that try to orchastrate graveyard-based shenanigans, while a singleton Nevermore is an anti-combo card. As a one-of, it’s unreliable rubbish here- combo doesn’t usually want to give you the benefit of limitless time to find it, and this slot would have been quite a bit better as, say, a Mentor of the Meek. Sadly, there’s not a Mentor to be found here, which is a curious oversight. As mentioned earlier, the other weakness of White Weenie decks is the susceptibility to running out of gas, playing all the cards in your hand early as you flood the board and then having to play off of your draw each turn. The Mentor is purpose-built to shore up that vulnerability, and the inclusion of a Nevermore over a Mentor is a glaring miss. Still, the turbocharged White Weenie deck looks like a blast to play, and we’re looking forward to pitting it against its rival, Deathfed. First, however, we’ll be putting that rival under the microscope. Check back in two days’ time to see how Innistrad’s other Event Deck has a few surprises of its own.