Given the attention that the heavy artillery of Graveborn has been getting after it all but dismantled Fire & Lightning, one question we’ve been hearing is how it might fare against the Slivers deck. On a lark, we decided to find out.

END_OF_DOCUMENT_TOKEN_TO_BE_REPLACED 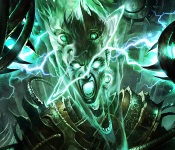 If you want to get grandiose and toss fancy titles about, Magic’s Classical Age of Preconstruction lasted about five years, from 1996-2001. Magic was a new game at the time, and we were still a year away from 1997’s Tempest- the dawn of the Theme Deck, the ancestor of the modern Intro Pack.

END_OF_DOCUMENT_TOKEN_TO_BE_REPLACED

Trick or treat! In case anyone didn’t get the message, this Autumn Magic will be all about horror- not only will we see the release of Innistrad, the first set of the new block, but on the mothership today Wizards announced the next entry in the Premium Deck Series to be… Graveborn! A reanimation.recursion deck which has creatures from all five colours, Graveborn will be hitting shelves in mid-November. Check it out!

Back on her feet just weeks after the new baby and ready to spit fire and rain lightning like she did when she was pregnant, Jimi was excited at the prospect of getting a run in with Fire & Lightning. As it happens, I needed a worthy foe to act as foil to The Slivers, so over cups of tea and cocoa we set in and waged war. The Slivers, as a five-colour deck, have an apparent disadvantage against the hyper-aggro mono-Red Fire & Lightning. Would I be able to hold on long enough to get my poor Slivers a foothold, or would I go down in flames. Here’s how our matches panned out.

END_OF_DOCUMENT_TOKEN_TO_BE_REPLACED

As any vanquished opponent might tell you, the Slivers can prove most resilient in any number, and the same can be said for the tribe as a whole. Most other popular, enduring tribes in Magic are part of the common folklore and mythos- Goblins, Elves, Merfolk. While other creature types have had some endurance throughout the years (see our history of the Kor here), it can be argued that few have fared as well as the lowly, unassuming Sliver.

END_OF_DOCUMENT_TOKEN_TO_BE_REPLACED

I don’t know who was more excited to roll up the sleeves and get down to playing- me with the new Fire & Lightning deck, filled with one of my favourite archetypes, and Sam with the five-colour critterfest Slivers. They seemed an enticing matchup, for the decks were not balanced against one another in design (the way, say, Duel Decks are) and anything could happen. In Phyrexia vs. The Coalition, Wizards similarly pitted a five-colour deck versus a mono one, and had to build in some restraints to the Phyrexia deck so that it didn’t just win almost every time (as you’d expect a Suicide Black to do).

These constraints- a larger mana curve and disparate win conditions- helped balance both halves of that Duel Deck, but for the Premium decks no such considerations were in place. Indeed, the nature of Slivers and its inherent card economy- where much like Allies each successive card of that type makes all the others stronger- meant that I fully expected to be given a run for my money. Fire & Lightning is more spell-heavy than the typical precon, so I’d have fewer creatures to provide a recurring presence. Slivers is almost entirely made up of creatures. Would I be able to burn through them all and get there, or would I find myself drifting with an empty hand while the swarm of Slivers overran me?

We sat down to find out, and here are our notes.

END_OF_DOCUMENT_TOKEN_TO_BE_REPLACED

A year ago, Wizards of the Coast released to some fanfare a new product line, the Premium Deck Series. Consisting of an all-foil theme deck, it was aimed at a very interesting segment of the market: casual players with an interest in pimp cards. Its Slivers tribal theme had zero Standard appeal however attractive the cards, but there was a welcome audience amongst the cube set who frequently enjoy using foils, foreign cards and alternate printings (promo, textless, etc) to make their creations stand out.

If Slivers fell far short of being an overwhelming success (you can still find them quite easily today for around $20), it was perhaps a failure in scope than it was in concept. Like most tribes, the Slivers have their adherents within the Magic community, but they are far fewer than say the Goblins or Elves. Having found that the right premium cards can command a large markup (see: From the Vaults), they returned to the drawing board and came up with an answer: don’t go deep, go broad.

END_OF_DOCUMENT_TOKEN_TO_BE_REPLACED

Today on the mothership, Monty Ashley has offered us up a teaser for the forthcoming second product in the Premium Deck Series line: Fire & Lightning. It releases on 19 November… have a look!