Now it’s time to head to the field of battle, Innistrad Event Decks in hand, and put the decks to the test. In our review of the deck, we found Hold the Line to be an admirably aggressive White Weenie deck, but would it meet its match in the slower, stalling Deathfed? To find out, Sam took up the gauntlet of the three-colour challenge, and here are the notes from our match.

Sam’s on the play for our opening game, and starts with a Swamp. I play a Plains, then tap it to pay for a Gideon’s Lawkeeper. When Sam drops a Viridian Emissary next turn, I don’t bother to attack but instead add a second Lawkeeper and Silver-Inlaid Dagger before passing.

Now turn 3, Sam- seeing the writing on the wall- opts to send in the Emissary on a 2-point attack. I equip the Dagger to one of my Lawkeepers, then swing in with both for 5. I add a Doomed Traveler and pass. Back to Sam, all she has is a Llanowar Elves. She opts to hold back the Emissary this time and ends her turn. I take the game firmly in hand when my Fiend Hunter exiles her Emissary and my unequipped Lawkeeper taps down Sam’s Elves, allowing the other Lawkeeper to get stuck in for 4 alongside the Doomed Traveler. Sam’s now down to 10.

As if resigned to her fate, Sam attacks with the Elves in one last gesture of defiance. Next turn I attack for 7, and Sam concedes after her next draw. 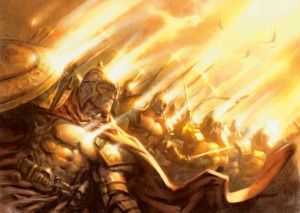 Honor of the Pure

This time Sam’s off to a good start as she draws her deck’s best one-drop in her opening grip, a small consolation at having had to mulligan down to six cards. The Birds of Paradise give her the confidence at being able to play her spells, hampered as she was last game by a decided lack of Islands. Of course, half my creatures are one-drops, and I find one of the more useful first-turn ones in my Elite Vanguard. Next turn Sam misses her land drop, but thanks to the Birds she fires off a Mulch to net three land and a creature in her graveyard. Now she plays a Hinterland Harbor, using it to send out a Llanowar Elves. Back to me, I opt to stay aggressive and attack with the Vanguard. I’m a little surprised when Sam takes the trade, offering up her newly-deployed Elves, but in retrospect seeing her hit on three land with the Mulch should have been sufficient forewarning. Having kept a one-lander, I end up missing my second land drop, and pass after tapping out for a Gideon’s Lawkeeper.

Now turn 3, Sam trots out a Bonehoard, which gives its Germ token +3/+3. I answer with an Accorder Paladin. Next turn Sam attacks with the Bonehoard, which I let pass to drop me to 17. She then follows up with a Boneyard Wurm and Splinterfright, showing what he deck can manage when its firing on all cylinders. Back to me, I have a few options. I have a Bonds of Faith, an Oblivion Ring, and a Mirran Crusader in hand. The problem with Splinterfright is that even if shackled up with Bonds or held in abeyance by the Crusader, Sam will still be getting the self-mill effect, so in the end I opt to exile the Splinterfright with the Oblivion Ring. I have no other play open, and pass.

Sam attacks with both her beaters on turn 5 for 6, taking me further down to 11. And now I have another calculation to make. In hand are the Crusader and Bonds, as well as an Honor of the Pure and a Silver-Inlaid Dagger. Sam’s left herself open to a surprise attack if I drop the Honor, and I can punch back for 7 damage. I know she’ll press the attack and take me to single-digit life, but then I can play the Crusader and neutralise her offense alongside the Lawkeeper. It’s a bit of a risk, but my instinct with aggro decks is usually to err on the side of aggression. Down goes the Honor of the Pure and the Dagger, and in charge my troops for 7. I mean, what’s the worst that can happen, right?

Sam taps out at the end of my turn to play a Forbidden Alchemy, then plays a second one during her main phase. Between them, three other creatures are put into her graveyard, and I’m now looking across the table at a 6/6 Bonehoard and 5/5 Boneyard Wurm. With me at 11 life.

Smarting after my six-turn beating, I resolve to play a little tighter on the final game of the match. I have a stellar opener, turning a Plains into a Champion of the Parish, while Sam manages to bring out her Birds of Paradise a second time. Next turn I add an Accorder Paladin, giving my Champion a +1/+1 counter and letting him swing in for 2. Back to Sam, she plays a Forbidden Alchemy, seeing a Bonehoard and two lands off to her graveyard- a miss.

Back to me for turn 3, I play a second Accorder Paladin followed by a Doomed Traveler, adding more counters to the Champion. I send him and the first Paladin into the red zone for 8 damage, and Sam’s now at 10. Back to her, she plays a Llanowar Elves then Mulch, netting her two land and two creatures off to the graveyard. She passes, and I untap. I then summon a Fiend Hunter to exile her Bird, then follow with another Doomed Traveler. The 6/6 Champion leads a Doomed Traveler and two Paladins into battle, swinging for 19 damage and a four-turn kill.

What can we say, this might be one of the shortest playtest reviews we’ve yet written! That speaks to the solid consistency of Hold the Line, and the solid aggression its more than capable of. One of the deck’s strengths given its low mana curve is the flexibiltiy it gives you when assessing your opening draw. In both game two as well as the pre-game friendly, I kept one-landers and didn’t really notice the squeeze. To be fair I did lose game two, but I had answers aplenty in my hand and just erred in my judgment. 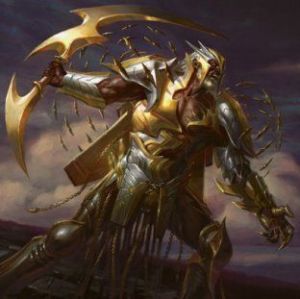 The deck certainly feels powerful when things come together, and like the best preconstructed decks it beckons with the promise of more to come with the addition of better cards. The Champion of the Parish in particular is highly optimized here- with so many cheap creatures to play, growing him more than once in a turn is easily done. The deck is also efficiently built- there doesn’t feel like there’s a lot of wasted space here. I noticed that particularly when I managed to play my Mirran Crusader and had a Silver-Inlaid Dagger available- there’s a lot of synergy and integration here, and it makes for a strong result. The deck’s synergy and speed are its most lethal assets.

If there’s a weakness, it’s more in the archetype than the deck. The 60 card maindeck is about as good as you might expect given the constraints in rarity each Event Deck must adhere to. The typical weaknesses of White Weenie generally involve running out of gas, either in the red zone or in your hand, and the deck didn’t see fit to include a Mentor of the Meek. Considering that a rare slot instead was used for Nevermore in the sideboard, that’s a strike against it as the Mentor is a great way to keep the pressure on. I certainly could not resist packing the surprise gift I made for Jimi with them, and GatheringMagic’s own Darwyn Kastle, a PT Hall of Famer and noted relationship guru, also was drawn to the card in his most recent article. Overall, this is a very strong Event Deck that should be capable of stealing some wins early even at the competitive level.

Hits: Exceptional speed and synergy lets this deck have at least a chance at winning at the constructed tables; easy mana curve gives you greater leeway with regards to which opening hands to keep; superb removal package keeps the lanes free for you to get through

Misses: Archetype generally outclassed in longer game; inclusion of Nevermore and omission of a singleton Mentor of the Meek disappointing