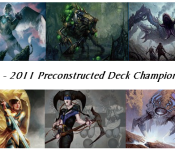 Welcome back once more to the 2010-11 Precon Championships! Today we begin the last of the four divisions- the Lauer! This season’s Lauer consists of a wide spectrum of decks. There are Intro Pack decks from each set in Scars Block, as well as Magic 2011. There’s also an Event Deck as well as a Duel Deck, and for a real wild card howabout the Premium Deck Series? With the other three divisions decided, all eyes are now here on the Lauer to see which deck will rise from the ashes of the rest to stake its claim on the Championship.

Let’s take a look at the bracket. We have the following matchups slated for today:

Let’s start with a review of all eight decks looking to make their mark and see their name written down in the annals of preconstructed history.

Detail: A tribal deck focused around the Splicers and their Golems, Artful Destruction takes some time to get moving but can pack a dreadful wallop once they do. Each Splicer passes on abilities to every Golem in play- and it brings one along for free the moment its cast. The question Artful will need to answer is whether or not Elspeth will let it survive long enough to begin its assembly line. (Reviews: deck, play)

Detail: A mono-White Soldiers deck, Elpseth brings a great deal of threat to the table. Duel Decks tend to be heavy with rares, and so Elspeth will have a lot to draw from in looking to defeat any opponent that comes her way. Being mono-coloured also says that she’ll be less vulnerable to mana issues than a number of other competitors- will that be the lethal combination needed to take the division? (Reviews: deck, play)

Detail: A ‘greatest hits’ compliation of burn and aggressive Red weenies, Fire & Lightning burned its way through the Slivers in our playtest- can it do the same to M11’s Reign of Vampirism? With an abundance of burn, it will take a very robust challenger to take it on and triumph! (Reviews: deck, play)

Detail: Regarded as perhaps the weakest of the Event Decks, the only two-colour release to date still has the power and consistency to give a solid accounting for itself. Relying on infect creatures and proliferate effects, it squares off against M11’s Power of Prophecy. Can Power foresee its own doom? (Reviews: deck, play)

Detail: A dark-horse competitor due to its somewhat unique nature, Mirromancy is the first truly spell-centric deck to be released since the advent of the Intro Pack. With flashy effects outnumbering its creatures, will it have the power to overcome its opponent and claim divisional glory? (Reviews: deck, play)

Rares: Hand of the Praetors, Putrefax

Detail: The first of the Block’s infect precons, Phyrexian Poison’s Golgari tandem showcased the advent of poison counters. With a number of infect beaters backed by some of Black’s natural killpower, Phyrexian Poison will be keen to sink its fangs into any would-be rival. (Reviews: deck, play)

Detail: Magic 2011’s innovation to the Core Set was to introduce a returning mechanic, and Power of Prophecy showcases it. With scry, card draw quality improves as you’re able to be more selective about what ends up in your hand. Fuse that to a White/Blue skies deck, and you have a recipe for success! (Reviews: deck, play)

Detail: The third Intro Pack to be built around tribal Vampires (following the ones in Zendikar and Worldwake), Reign of Vampirism introduced a new Vampire ‘lord.’ Although the inclusion of Green felt tacked-on, the deck still has plenty of aggression which can overrun the unwary. (Reivews: deck, play)

With the combatants now introduced, we join them on the field of battle. Today, the pool will be cut in half, with only four decks surviving to content for divisional glory next week.

Power of Prophecy vs Infect & Defile

Prophecy gets stuck with a 2-land hand and draws nothing but fat- Armored Cancrix, Jace’s Ingenuity, and- most cruelly of all- Foresee. It manages to stall a turn with a Safe Passage, snipe off a Plague Myr with a Divine Offering, and land a Cloud Elemental for some niggling damage. It gets overrun by a swarm of Necropedes, Plague Myr, and a Corpse Cur.

Another onslaught of infect weenies followed by a turn-4 Phyrexian Vatmother keep Prophecy on the back-foot for the entire match. Two Plague Myr, a pair of Necropedes, and a Corpse Cur square off against a Cloud Elemental, Æther Adept, and Maritime Guard. A Sleep lets Prophecy stall for time, but a pair of Foresees come up with nothing to turn the tide.

It’s an all-out knuckleduster in the opening game as both sides hammer it out against each other, furiously trading blows. A Bladed Pinions for Poison gets Crushed. One of Poison’s Swamps gets Melt Terrained. Mirromancy’s Peace Strider gets Sliced in Twain. An Ogre Resister and a Cystbearer trade when a Hand of the Praetors drops. The Hand eats a Lightning Bolt next turn, courtesy of a Foresee. A Carrion Call is neutralised by a Blisterstick Shaman. Nothing that gets on the board seems to stay there for very long. In the end, an unimpeded strike by a Putrefax after two hits from the Cystbearer gets Poison within range, and finally hitting a second Swamp lets it play Ichor Rats, winning the game.

With its back on the ropes, Mirromancy comes out swinging. It snipes an early Ichorclaw Myr with a Blisterstick Shaman, which relentlessly attacks every turn. Poison lands a Plague Stinger which does the same. A Contagious Nim threatens to upset the balance, but gets torched by a Burn the Impure. Burn the Impure then gets fetched back to hand with Call to Mind, and a Koth’s Courier is added to the field.

To finish off Poison, Mirromancy Burns the now-defending Plague Stinger and swings for lethal. A Carrion Call threatens to delay by killing the Shaman, but in response a Rally the Forces keeps it alive. Down to 1 life, Poison is finished off by a Red Sun’s Zenith.

Down to the wire, in one game for it all! A Plague Stinger emerges early for Poison, but Mirromancy Burn the Impure’s it away. As before, a Call to Mind fetches it back. A Contagious Nim draws a Lightning Bolt. With Poison on two Forests, Mirromancy tries to cripple the ability to play Putrefax with a Melt Terrain, but Poison then topdecks a replacement.

Mirromancy finally goes on the offensive with an Ogre Resister to block Carrion Call Insect tokens, then adds a Neurok Commando. Poison can’t keep pace, when when the Fire Servant finally arrives, the follow-on Burn the Impure torches a second Plague Stinger for 6, and Poison for lethal.

A slow start for both decks gives each a little room to manoeuver. Artful starts with a Blade Splicer, then follows with a Conversion Chamber and Sensor Splicer. It kicks into high gear when it drops the Precursor Golem, and soon adds a Vital Splicer. That puts its Golem count to five tokens plus the Precursor- a huge board presence.

But not only does Elspeth stay alive, she thrives! Kemba’s Skyguard and Temple Acolyte boost her life total, then does it again after returning both to hand with a Stormfront Riders. Elspeth stays up thanks to tactical chump blocking, grinding it out in the air with a Kor Skyfisher and the Skyguard. Artful’s War Report buys it some more time, but Elspeth keeps the pressure on with a Conclave Phalanx and Glory Seeker, and Arful simply can’t answer her fliers in time.

This time Artful not only gets its Golems (via Blade, Sensor, and Vital Splicers, followed by a Golem Artisan), but it has plenty of mana to back them up. Cultivate, a pair of Gold Myr, and a Palladium Myr allow plenty of quick plays, overwhelming Elspeth’s defenses. She manages a Kor Skyfisher early backed by an Infantry Veteran, then follows with Stormfront Riders, Kemba’s Skyguard, and Conclave Phalanx. Alas, it’s not enough. With the Artisan in play with ample mana to draw from, every block becomes a nightmare for Elspeth. Weak points in her armour are exploited by Golems getting hefty power/toughness boosts, and the first strike ensures that the Golems live to fight another round. Before long, the Golems are walking over the corpses of Elspeth’s onetime defneders, and closing in for the win.

A long, bloody, protracted affair, with all to gain and all to lose. The Golems land a turn-2 Suture Priest, which has an impact well above its humble casting cost. Over the course of the game, it would result in a a fairly large swing in life totals. Artful lands the Master, Sensor, Blade, and Maul Splicer, but Elspeth begins with an early Crusade, Infantry Veteran, and Elite Vanguard. A Kor Skyfisher bolsters her ranks, and the Angel of Salvation is large enough to stop anything the Golems have to offer- even the Phyrexian Hulk. It’s a long midgame stalemate, with both sides building up their forces.

The breakout play comes when Elspeth uses a Burrenton Bombardier to reinforce the Angel, sending it in for 8. Artful’s counterattack is broken up by a timely Abolish and Razor Barrier. Elspeth holds the line, then swings for lethal next round.

Fire & Lightning vs Reign of Vampirism

As expected, F&L comes out in a blaze. A Mogg Fanatic on turn 1 is joined by a Hellspark Elemental on turn 2. A Bloodthrone Vampire trades with the Mogg, while a Royal Assassin draws a Lightning Bolt. A Hammer of Bogardan to Vampirism’s face keeps the momentum going, and another Bolt picks off the Captivating Vampire. A Spined Wurm, however, proves a bit harder to kill. It gets in some solid damage before being blocked by a Jackal Pup (ouch) and Bolted to death. The damage done, Vampires extinguishes the pyromancy with a 6-point Corrupt.

F&L wages a war of attrition. Early opposition like the Child of Night (Lightning Bolt), Barony Vampire (Hammer of Bogardan), and Bloodthrone Vampire (Mogg Fanatic) are overcome, while it steadily whittles Vampirism down with a Hellspark Elemental, a Spark Elemental, another Fanatic, and a retrieved Hammer. Vampirism managaes to cling to life with a feeble 3-point Corrupt as it desperately digs for cards with the Sorcerer’s Strongbox, winning the flip on the third try. It’s small consolation- Vampirism is torched by a Fireball next turn.

A fast one, F&L again blows up most everything that Vampirism plays. A Child of Night and Barony Vampire eat Bolts, while a second Child of Night gets the Hammer. Vampirism is stalled on three land with a Spined Wurm and Giant Spider in hand. A Pillage to kill off the only Forest in play puts the game away, ending with a 6-point Fireball after Vampirism is softened up by a Spark, Hellspark, and Jackal Pup.

When the dust settles, four decks lie sparwling in the dirt, their run for glory crushed in the first round. For the victors, this is only the beginning, for they’ll be back in the arena next week to determine who gets to challenge Bring About the Undead Apocalypse for Forsythe glory. The championship match is coming, will it be the Lauer which claims it?