2010-11 Precon Championships: Round 8 and the Leaderboard 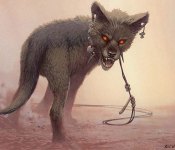 Week by week we’ve been closing in on the final battle to decide the 2010-11 Preconstructed Deck Champion, and this coming week-end we’ll have narrowed the field of 32 down to a final four. The Nagle. The Tinsman. The Turian. Three divisions have anointed their chosen who will represent them on the field of glory. All that’s left now is the Lauer.

Every step of the way the readers have made their predictions for our giveaway, and we’ve tallied the points earned from each correct guess. It’s a close race, with the leaders separated by a single game. This past weekend saw furious opening round Lauer action as the Infect & Defile Event Deck trounced Magic 2011’s Power of Prophecy. Less expected was Mirromancy’s handy defeat of Phyrexian Poison, the infect-themed Intro Pack from Scars of Mirrodin. While the Blue/Red spell-heavy deck was celebrating its victory, Elspeth dismantled the Golems of New Phyrexia’s Artful Destruction. And closing out the day was the hotly-contested matchup between M11’s Reign of Vampirism and the all-foil Premium Deck Series entrant, Fire & Lightning.

Our predictors were on it, though, correctly calling a superb 69% of the matches! As is custom, we’d like to extend specific congratulations to the perfect scoresheets of eeeka, fillip, and Marc Allie. Marc Allie actually warrants an extra call-out here, for this was his second perfect score in as many weeks, seeing him vault up the leaderboard after going 7-for-7. Two weeks ago he was firmly middle-of-the-pack, and now he’s a whisker shy of catching our leader. Still, Icehawk hasn’t made it easy, again guessing above the curve by picking three out of four matches correctly. And there’s still an entire pack just a couple of points shy of him, so the pressure’s on!

But all the easy weeks are gone, and it’s going to get harder from here. This coming weekend we have the divisional finals, where each predictor has to call two different games, then guess who wins the third. And next week, for the Finals, we’ll have the same format (two known matches, then the Final which is anyone’s guess). On the line is a prize package consisting of two Intro Packs- one each from M12 and Innistrad!

And so, here is this week’s leaderboard!

And finally we present this Saturday’s matches. As usual, kindly leave your predictions in the comments below. We’ll want predictions for Games 23 and 24, as well as which deck ultimately triumphs in the division (when the winner of each Game plays the other winner). Best of luck to all! 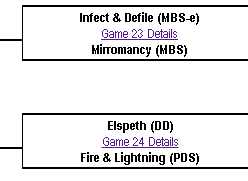