Keen to get the decks out into the field after a thorough breakdown of each, I challenged Sam to the customary best-of-three. She took Tezzeret leaving me with Elspeth, and here are the notes from the matchups. 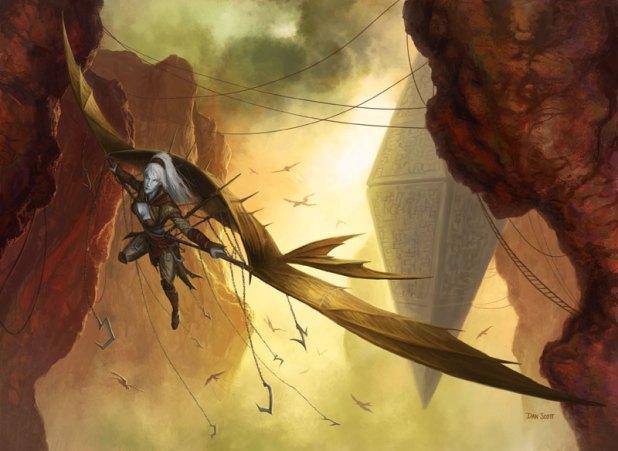 Sam’s on the play, drops and Island and passes. I place a Plains down, then cast an exceptional early defensive play: Loyal Sentry. With a solid play of her own, Sam then gets out an early Energy Chamber, but I go into aggression mode with a Kor Skyfisher, pulling a Plains back to my hand. With Crusade in grip and little else for the moment, it’s a gamble of a play but one with little downside.

Sam’s upkeep for turn 3 arrives, and having no other artifacts in play her Energy Chamber places a (useless) charge counter on itself. Then she casts a Frogmite. I drop Crusade right on schedule and swing in for 3 with the flying Skyfisher before passing. So far, I am liking the look of the deck- nice early defense and evasion.

Turn 4 sees Sam with a flurry of activity: Mishra’s Factory, Arcbound Worker and the Aether Spellbomb all come down on her side, with a +1/+1 counter for the Frogmite courtesy of the Chamber. With nothing able to defend her in the air, I swing in again for another 3 with the Kor, then add a Burrenton Bombardier. With her Sepllbomb and my Crusade in play, using its Reinforce ability would have been a poor use of the card, and it’s an easy choice to hardcast it.

With the Frogmite of decent size, Sam turns her Chamber’s counters onto the Arcbound Worker, whose Modular ability will allow those counters further utility if it dies. Fishing for answers, she casts Thirst for Knowledge, pitching an Esperzoa to keep the extra card. I play a Plains, swing in for 6 (taking her to 7) and pass.

Seemingly coming up short for an answer, Sam swings in with the Assembly Worker, and uses her Mishra’s Factory to pump it, taking me to 17. Smelling blood, I swing in with both flyers and cast Mighty Leap on the Bombardier for lethal. Sam rightly moves to disrupt the play by triggering the Aether Spellbomb to return the Bombardier safely to my hand, but my Razor Barrier in response thwarts her and just like that I’m up a game.

Sam starts our second matchup in better shape: Stalking Stones and a Steel Wall. I lay a Plains and pass. She then plays an Elixir of Immortality after dropping an Island, and I get Crusade back out. With Sam’s turn 3 Moonglove Extract, I have my work cut out for me.

Fortunately, the Burrenton Bombardier makes another appearance, and I have the evasive beater I need (with the Crusade to keep it from dying to the Extract’s damage). Sam comes up blank on turn 4, and I deploy the Infantry Veteran, defying her to trade the Extract for it. She declines, and plays an Assembly Worker. Pumping it with the Veteran, I swing in with the Bombardier for 4, then lay down the Conclave Phalanx (netting 3 life). I’m at 23, and Sam’s down to 13.

Hope arrives for Sam on turn 6 in the form of Tezzeret the Seeker, and Sam starts racing to build him up to ultimate. Meanwhile, I kick a Kor Aeronaut to give my Phalanx flying, and hammer Sam for another 7 damage. The next turn hits even harder, with Sam cracking the Elixir to stay alive, but scoops after she’s unable to find an answer.

Both of the previous games played right into Elspeth’s strength: a string of early, aggressive plays to take out Tezzeret before he had a chance to build up. Our last match would show me what his deck was capable of when gifted with a little time…

This time, Sam’s able to get out some early muscle in the form of a Runed Servitor and Serrated Biskelion, which puts me on an unaccustomed back-foot when all I’m able to manage is a Glory Seeker. Still, with a hand brimming with removal I like my chances, and take the first opportunity I have to Sunlance the Biskelion right into the graveyard. Still, Sam goes aggressive right away, and I decline to trade my Seeker for the Servitor just yet. Instead, we’re trading early swings and both our life totals are in play.

On turn 4, Sam casts Faerie Mechanist, whose reveal turns up a Contagion Clasp– lucky break! We trade blows, but I have no cards to play. On the next turn, Sam adds to the mix with a Master of Etherium and plays the Contagion Clasp (with the -1/-1 counter on my only critter, the Glory Seeker). Buffed by the Master, her Biskelion and Machinist swing in for 6, but I respond with Swords to Plowshares on him, so the buff disappears before the blows land. I take 4 instead.

On my turn, looking to buy some time I play the Conclave Phalanx, which nets me 2 life (putting me up to 14. By contrast, thanks to the loss of her Master Sam is back to 20). I swing in for 1 with the Seeker.

Turn 6 arrives, and Sam continues the steamroll, with Juggernaut coming down onto the table. She swings in with the Runed Servitor, looking to trade it for a card and succeeds- doubting a trap, I block with the Phalanx and we both draw. I take 2 from the unblocked flying Mechanist.

My removal allows me to at least tread water as I send the Juggernaut on a Journey to Nowhere before playing Temple Acolyte for 3 life (putting me at 15). Sam plays an Esperzoa before swinging in for 2. Knowing that the Esperzoa will take the Contagion Clasp from nuisance to threat I hit it with Swords to Plowshares as well. Sam’s life again returns to 20, and the last of my removal is gone.

On turn 7 I decide to cast my Celestial Crusader, bypassing his “combat trick” Flash to instead just get some extra hammering in. My buffed beaters swing in for 7, and I empty my hand by casting Kor Aeronaut.

Sam rolls out a turn-8 Synod Centurion, then passes. The shoe has been on the other foot this game, but often the first turn your opponent declines to attack you is when the game starts to turn. I hope that’s the case here.

Unwilling to risk my Crusader against her flying Mechanist, I only attack with the 3/3 Aeronaut. Sam’s now down to 10 life, with me marginally ahead at 13. Sam keeps the pressure on, though, attacking for 2 with the Mechanist then casting the Clockwork Hydra. I swing back with the Kor, then pass.

The game is now easily longer than the first two, and turn 9 nets Sam a Steel Wall and an activation of the Contagion Clasp, which buffs her Hydra and sends my Glory Seeker into the great beyond. Undeterred, I swing in for another 3, and Sam’s at 4 life.

Then Sam makes a serious tactical error. She taps to cast the Trinket Mage and fetches an Aether Spellbomb. But instead of casting it, she activates the clasp and swings in with a 6/6 Hydra. I chump with the Acolye, and take 1 damage from the Hydra (I’m now at 10).

Perhaps Sam thought she’d have another turn to add to her defenses, but I don’t give it to her. I Saltblast the Faerie Mechanist, which leaves her defenseless in the air, then swing in with both the Aeronaut and Crusader for lethal.

Excepting the third game, which was a combination of a strong showing from Sam’s Tezzeret deck along with limited proactive options of my own (removal, after all, is reactive), Elspeth was a solid and consistent performer. There were no problems at all in getting threats on-line, and the lack of a sizable midgame threat was compensated to some degree by the options that did arise, typically through the Reinforce ability on a number of the cards.

Reinforce is tricky- it’s a great way to squeeze some extra power onto an existing critter when the card it’s on would not by itself be useful (a 1/1 First Striker is great on turn 2, say, but often much less valuable on turn 8). That said, the great enemy of all +1/+1 counters, whether it be from Reinforce or Modular or even, say, Devour- is that it is extremely susceptible to bounce effects- which, naturally, Tezzeret boasts in multiple. Reinforce is little different than an Aura, then, when assessing card advantage, so use with caution. The presence of Crusade and Celestial Crusader means that that little 1/1 First Striker might not stay so little for long, and be worth casting.

Thematically, the deck is very solid, and has something of a ‘Duel Decks 2.0’ feel when weighed against previous incarnations. The strategy feels more intricate, and the card selection tighter than, say, a Garruk vs Liliana. That’s not to say its without its flaws, however. In particular, the use of the Selenya ability Convoke on several of the more expensive cards seemed little substitute for having an actual threat at that mana cost. The Conclave Phalanx in particular is somewhat disappointing, in that its only upside besides being a big blocker (which an aggressive deck like this doesn’t always need) is a modest amount of lifegain. Like Affinity, cards with Convoke tend to be somewhat overcosted (so that you don’t consistently cheat them out early and break the mechanic), and it seems like a bit of a misfit here.

Overall, though, it’s a solid (if a bit unsexy) package. We’ll wait until we’ve tested Tezzeret’s deck to recommend the entire package (or not), but Elspeth is a fine choice for those who enjoy a White Weenie strategy.

Cons: Gutshot hole in the middle of the mana curve means you’ll often have weaker options in the midgame; Scars of Mirrodin preview card a poor choice (not only is it rather dull, but it’s not even a Solider); Convoke keyword a flavourful inclusion but a bit weaker in actual play; deck sports some defensively-optimised cards (Loyal Sentry, Conclave Phalanx, etc) less suited for an aggression strategy (which White Weenie must be)