In our last review, we took Reign of Vampirism out for a spin, and it performed admirably in no small part to the strength of drawing the premium foil, Captivating Vampire, early and often. Of course, being a singleton it’s hard to rely on such fortune, but it’s useful to break down the rest of the deck and see what results can be expected with consistency. As we’ll see, the deck is solid in that particular regard, but has some gaping flaws in its design.

As discussed in yesterday’s opinion piece, Vampires have been retooled and reconfigured for Magic starting with M10 and Zendikar. No longer the occasional bomby rare, they have shoved past Zombies and claimed the mantle of Black’s tribal champions. That said, they occupy a similar place on the ‘food chain,’ of sorts, now recast as fast, aggressively costed and typically smallish creatures designed for an aggro rush, and Reign of Vampirism showcases this to good effect.

To take advantage of Captivating Vampire’s steal-a-beater ability, five Vampires need to be in play, and Reign nudges the odds in its favour with a wide array of them: 65% of the creatures selected are Vampires. Revealingly, if you exclude 4-drops and above, the percentage spikes to just over 81%. Fine math, but what does it mean? Let’s take a look at the curve chart:

Reign leads off with a trio of Viscera Seers, one-drop Vampires whose ability- requiring the sacrifice of a creature- should almost exclusively be used in conjunction with the pair of Reassembling Skeletons. But it’s at the two- and three-drop slots that the bulk of the creature swarm is located.

Consistency is unusually valued in this deck: witness the three copies each of Bloodthrone Vampire (another synergy with the Skeletons), Child of Night, and Barony Vampire. These aren’t the ultra-aggressive Vampires of Zendikar (think Vampire Lacerator), but they’re fast if fragile and should be able to get you out ahead early.

The last two early creatures are more utility-based. In addition to the aforementioned Captivating Vampire, there’s also a Royal Assassin who’s as much a deterrent as anything. There are not a lot of big beaters in the deck, and it works best with an early Swarm strategy. The Captivating Vampire’s requirement, though, means that you’ll be handling Weenie creatures with greater than usual care. Trades are typically not to your benefit, and you may need to let your life total run down a bit avoiding losing your precious Vampires to blocking.

Assisting you in that regard are the few reasonable beaters the deck offers: two Howling Banshees, a Giant Spider and a Spined Wurm. The Giant Spider- typically somewhat of a defensive choice- isn’t necessarily out of place here, as a four-toughness blocker can thicken up the red zone, buying you precious time to find the Captivating Vampire and bring four additional Vampires online.

Once you do, the game should be ending very quickly in your favour. 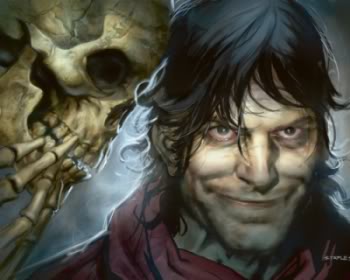 Unusually for Black, Reign’s suite of noncreature spells is a bit light on the removal, but for the most part does seem to have been selected with some care. Almost everything is in support of your Vampire-centric strategy, and should be used accordingly. The lone Giant Growth, for instance, makes the customarily fine combat trick (and ersatz removal), but often can serve a nobler purpose of keeping your Captivating Vampire safe from Lightning Bolts, Last Kisses, and anything else that threatens his ability to make a living. Should he succumb, a Nature’s Spiral and two Rise from the Graves ensure that the cause is not lost. And should drawing into him elude you, a pair of Diabolic Tutors give you ways to find him.

As for the removal suite, use them with care- there aren’t many. Two Doom Blades are the only instant-speed kill the deck boasts, while a pair of Quag Sicknesses and Corrupts round out the package. Corrupt is a welcome addition due to its ability to serve double-duty as direct damage to your opponent, though its effectiveness is somewhat hampered by the fact that Reign is a two-coloured deck. Corrupt is a very greedy spell which works best in mono-Black.

Quag Sickness, too, suffers from the same limitation, though it occupies a curious design space. Given the nature of the spell, it may well linger for a time on an opponent’s beater until you’re able to reach enough Swamps to make it lethal. On the upside, it gets around the limitation of Doom Blade, as it doesn’t care about the colour of its target. On the downside, it’s less effective against Green, White, and Blue (the first two because of enchantment removal, the latter because of bounce). Naturalize and Cultivate offer a splash of customary Green utility.

The deck’s lone artifact, Sorcerer’s Strongbox, is dreadful but can be a rationalised by the fact that Weenie decks tend to blow through their cards early, so even a run of bad luck with the Strongbox isn’t as painful as it might be for other decks. It is, however, still dreadful.

When taken together, the deck’s curve fills out a little bit more:

Because of the high amount of card repetition relative to other preconstructed decks, Reign of Vampirism should offer a reasonably consistent playing experience. Dump a swarm of Weenies out early for some quick damage, retrench and use selective removal to stagnate the board, all the while looking to get out four Vampires and the Captivating one, either through direct draw or by tutoring. Steal creatures, and bring the game to an end.

This is Reign’s most effective win condition, but backups exist in the form of the larger creatures and the Corrupts. If things are going pear-shaped, hope to draw some removal and kill something you can then animate. It should go without saying, though, that the deck’s odds are considerably diminshed if the Camptivating Vampire long eludes you.

If there is a grievance I have with the deck, it is with the colour selection. Reign really wants to be mono-Black, and there’s very little Green offers it here: two whole creatures, a trio of lesser utility cards and a nifty combat trick neatly summarise Green’s contribution, while at the same time it throttles out the growth potential of Black’s removal suite like a weed in a garden. Whenever Wizards releases a preconstructed deck utilising opposing colours, I always sit up and take notice, because such combinations can lead to fun and unusual combinations. In this deck, it feels like a forced tack-on to avoid making a mono deck (not an unreasonable desire, given that both Zendikar and Worldwake had mono-Black offerings), which is probably what it was. Compare this to the Ears of the Elves deck, which was the inverse (Green splashed with Black) and by contrast felt very well integrated both thematically and mechanically.

Read more from Magic 2011
← Opinion: On the Evolution of the Vampiric Species
Magic 2011: Stampede of Beasts Review (Part 1 of 2) →
8 Comments Post a comment