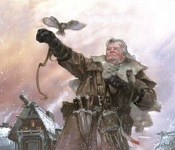 Fresh off the detour we took to cover Duel Decks: Knights vs Dragons, we’re back with our Coldsnap coverage and picking right up where we left off. In our last feature from this set, we took apart the Blue/White Kjeldoran Cunning deck to see how it was constructed.

Calling it a “a crafty, scrappy deck that plays against our usual expectations for both colours,” we challenged Jimi to the customary three duels. For her part, she chose the Blue/Black Snowscape. Our game notes are below.

Also, as a reminder, the contest for the Coldsnap theme deck giveaway is still ongoing, and plenty of chances to get your name in the hat!

On the play, Jimi leads with an Island while I begin with a Boreal Shelf. A turn-2 Viscerid Drone starts off the creature arms race for Jimi, though as yet I have no answer. Next turn, she adds a Balduvian Frostwaker. I go fishing with a Lat-Nam’s Legacy at the end of her turn, flushing away a Kjeldoran Home Guard. This lets me draw two cards during my upkeep, and I score a hit with a Zuran Spellcaster, giving me an answer to her Frostwaker.

Now turn 4, Jimi uses the doomed Frostwaker to animate one of her lands, a Swamp. She sends it in on the attack alone, and it takes me down to 17 (I’d been hit once by the Viscerid). She then puts an Essence Flare on the Spellcaster- not enough to save her Frostwaker, but a good use of the card as ersatz removal. Back to me, my pinger dies but it takes her wizard with it. I then play a Kjeldoran Elite Guard and pass. Next turn, Jimi adds a Chilling Shade to her board. I have nothing, so I send the Elite Guard in for 2 and pass.

As expected, Jimi sends in the team next turn, and I’m ready with the Surging Aether after she pumps up her Shade. Unfortunately I whiff on the ripple, but at least I avoid a hefty chunk of damage. As it is, I still take 3. For my part, I again attack for 2 and end my turn after adding a Kjeldoran Outrider. Back to Jimi, she sends in the animated Swamp, taking me down to 12, then summons a Rimewind Taskmage. I put us even in life when I send in by Outrider, using the Elite Guard to boost him. I then tap out for a Kjeldoran Gargoyle, an impossible-to-resist target for Jimi’s tap-down Taskmage.

The Chilling Shade reappears on turn 8, but there’s no attack forthcoming- she’s biding her time. As expected, Jimi locks down my Gargoyle at the start of my turn, but this allows me to chunk in for another 4. I add another Kjeldoran Outrider and pass. Next turn the pressure stays on as Jimi sends in her Shade and the animated Swamp, and the Shade again draws a Surging Aether to send it back to her hand. Alas, luck fails me as I have another miss on the ripple. Still, momentum is on my side as the Gargoyle ties up Jimi’s tapper, and now I swing in for 6. Jimi chumps the Drone, but is still cut in half to 4 life. She resummons the Chilling Shade, but it’s not enough as my remaining forces charge in for the alpha strike.

This game opens up with a bit of a quicker pace than the last. By the time the fourth turn is over, Jimi’s landed a Viscerid Drone, Rimewind Taskmage, and- most distressingly- a Drift of the Dead. For my part, I’ve springboarded off of a Brainstorm to field a Kjeldoran Outrider, Surging Sentinels (no hit on the ripple), and a Field Marshal. The question for me is the classic weenie general’s dilemma: how to get around a massive blocker? It’s very nearly a clean sheet thus far- my attack for 2 with the Outrider is the game’s only damage.

Now turn 5, Jimi adds a Blizzard Specter, but is otherwise content to sit back and let her board develop. Once again she’s got her tapper out to blunt my offense, and she’s been blanking my Outrider. Still, I have an answer for her- I cast a Surging Aether on her Drift, returning them back to her hand and giving me a line at some damage. I check the ripple and hit- her Specter follows the Drift back to hand. I ripple again for the second Surge, and bang! Off goes the Viscerid Drone. Three spells for the price of one is delightful card advantage, and I press the attack with my two open bodies and hit for 5, taking Jimi to 13. Of course, next turn Jimi simply recasts Drift of the Dead, and I’m right back where I started. Back to me, I’m lacking answers so I go trawling, first playing a Portent (and opting to shuffle my library), then following up with a Lat-Nam’s Legacy to throw away Reinforcements in the hope of drawing better.

Jimi recasts the Blizzard Specter on turn 7 after I draw my three bonus cards, and passes. With my Outrider tied up by her tapper, I cast a Kjeldoran Elite Guard, ending my turn right after. Unopposed in the air, the Specter comes in and gives Jimi her first bit of damage on me. Instead of the discard, she opts instead to Unsummon my Field Marshal, a card she detests. She follows up with a Zombie Musher, whose landwalk is on-line due to my Boreal Shelf played earlier in the game. Back to me, I cast a Kjeldoran Gargoyle and pass.

Now Jimi changes gears. She uses her Taskmage to tap my Gargoyle, then sends in the Specter (alongside the Musher) to banish the Gargoyle back to my hand. A solid play, but one that gives me an opening. I replay the Field Marshal, then swing in for 5 with my Soldiers. I then angle for a Surging Sentinels run, but whiff on the ripple and only end up with one of them. It’s my last, best chance as Jimi’s soft lock closes in around my throat. I fall to her relentless aerial forces.

On the play, I lead off with a Boreal Shelf, while Jimi begins with an Island. Next turn brings me an Island of my own, followed by a Kjeldoran Outrider. I’ve a very solid hand, and there’s every chance I’ll be able to overwhelm Jimi this time. Case in point- her turn-2 play is a Mistfolk.

Now turn 3, I drop a Field Marshal and swing for 3 with the Outrider. Jimi responds with a Frost Raptor. Any good feeling she might have had about air superiority are dashed when I drop a turn-4 Wings of Aesthir on the Outrider and swing in with a four-power first-striker. Jimi’s now at 13 life, with little to show for it. I follow up with a Brainstorm to fish for cards to keep the momentum going, but all I manage is land. Looks like I’ll have to do this the hard way. Over to Jimi, she plays a Drift of the Dead, and it looks like the hard way just got a little harder. Still, the flying, boosted Outrider might just be enough. Jimi attacks with the Raptor, and passes.

In again on turn 5, and Jimi’s at 9. I play a second Outrider and pass. Back to Jimi, she lays down a Browse, then swings for 2 more with the Raptor. I cast a second Brainstorm at the end of her turn- still nothing. This is ever the danger with an aggressive weenie-centric strategy: running out of steam before they run out of life. Next turn, I add a Kjeldoran Pride to my super-Outrider and attack, dropping Jimi to 4. I then snipe her Browse with a random Disenchant and pass. That’s when things go all pear-shaped when Jimi trots out Heidar, Rimewind Master. Her only play of the turn (and the only one she needs), she throws me a smug look and passes.

It’s now turn 7, and the game has taken quite an unpleasant twist. With little removal at my disposal, I’m well and truly at the mercy of utility creatures. Knowing my super-Outrider is doomed, I attack anyway and force the chumping of her Frost Raptor. Over to Jimi, she plays a Zombie Mucher and passes. At the end of her turn and knowing what’s coming, I go ahead and pay to move the Kjeldoran Pride over to my second Outrider. Now my turn proper, I attack with the flying Outrider, and naturally Heidar puts a stop to it. The Outrider comes back to hand, the Wings off to the graveyard. I recast the Outrider and pass.

Jimi’s able to engage Heidar at-will, blunting any offensive move I could hope to make. I draw into a replacement Wings of Aesthir, but cannot cast it as she’d simply Unsummon my creature in response. Every turn, Jimi grinds me down with the Zombie Musher, until towards the end a Balduvian Frostwaker joins the party and begins animating her lands. Having been on the verge of victory, I am instead subjected to a swingback that hands me a turn-12 defeat. 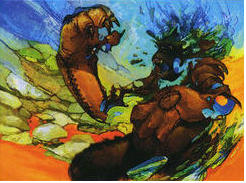 If you’ve never played with Coldsnap but have experience with Alara Reborn, then you’ve got a pretty good idea of how fun free passes through the library can be. Unlike cascade (for the most part), ripple can whiff and leave you with nothing but an overpriced effect, or it can give you outrageous card advantage as it did for me in game two. Still, also unlike cascade it feels like a charge-up-and-expend effect: you begin the game with the highest chance of a major effect, which is reduced each time you cast one. In other words, it feels rather finite. I wasn’t able to take advantage of my ripple and command the game, and suddenly that last Surging Aether was much less useful to me. There’s a small dose of synergy with the Jötun Grunt, an interaction I hadn’t noted before- the Grunt can repack your library with those ripple cards, giving you renewed chances for blowout effects.

In all other ways, though, Kjeldoran Cunning felt less cunning and more mediocre. Although you can’t exactly fault a deck for not having options that really didn’t exist in its card pool (solid White removal), it’s a bit difficult to consistently execute a winning ground campaign without it. All it can take is a card that can kill one of my weenies every round (see: Drift of the Dead), and the calculation of profitability on offense goes right into the toilet. In short, the deck has very reasonable expectations, but it doesn’t quite do the job. Perhaps a bit more in the air might have been enough to overcome the deficiency, and thus far few games with Coldsnap decks seem to move beyond a (wait for it) glacial pace, the mana is certainly there.

Hits: Ripple is a wonderfully fun mechanic that elevates the enjoyment of an otherwise rather lacklustre deck; Darien, King of Kjeldor is a superb rare for the deck