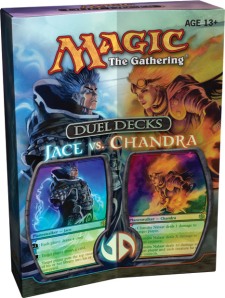 As previously covered, Jace’s deck in the Duel Decks package was subtle and complicated, well-befitting the character Wizards has created in the Planeswalker. Not surprising, then, to find that the deck of his foil, Chandra, is is many ways quite the opposite. Although it is something of a cliche to say that burn decks are simpleton affairs, it certainly cannot stack up to the mono-Blue deck in terms of complexity and options. To some it may be refreshingly straightforward that Chandra’s deck is designed mainly to smash face with beaters and clear a path with burn. In many ways, what you see is what you get with the fiery, impulsive Chandra.

A Burning Ring of Fire

Let’s start with the array of creatures. A look at the curve graph shows a much more balanced spread than was present in the Jace deck, and with good reason- Red never wants a game to go long.

It’s telling that the greatest threat density is found in the 2-drop slot, and even the earliest creatures never quite lose their punch. Most everything Chandra brings to the table has the ability to go large in some way as the mid-game stage is entered.

Take, for instance, the two one-drops (Flamekin Brawler). A 0/2 with Firebreathing, while there’s some congestion with having one out early (do you attack for 2 or play something else on your second turn, since they don’t do any damage without assistance), at no point in the game will they be unwelcome. They might well go down easy with only 2 toughness, but with enough open mana they’ll almost certainly be taking something down with them.

The same goes for the Pyre Charger, one of the deck’s very solid 2-drops, and indeed this slot is loaded with goodies. A pair of Soulbright Flamekin pull double-duty, granting Trample and even acting as a mana accelerant. The lone Fireslinger is a useful pinger despite the drawback, and the last two cards are my personal favourite: the Slith Firewalker. Faced with the prospect of growing out of control, they’re often an early must-answer card in the deck. If nothing else, they are certainly magnets for the Blue mage’s bounce spells.

The 3- and 4-drop spots are a bit narrow, as the deck has given you plenty to do early that will need the extra mana for pumping. Still, there are some useful cards here: a Flamewave Invoker provides a solid dose of uncounterable damage. The Flametongue Kavu begs to be a 2-for-1, and a smattering of Dragons (two Furnace Whelps and a Rakdos Pit Dragon) give you some presence in the air. The Hellbent mechanic on the Pit Dragon is an especially nice touch considering how easy it can be for a Red mage to run out of cards in hand.

Chandra’s deck, however, is lighter on the big finishers than Jace’s. The pair of Oxidda Golems– having Affinity for Mountains- can’t really be considered as 6-drops in fairness, though they are quite inferior to their Jace counterparts as they’re not as robust on the back end and lack evasion. The Ingot Chewer isn’t much of a finisher, but it’s price point reflects its utility as an artifact killer. That leaves the paltry Chartooth Cougar, and the heavyweight Hostility.

Don’t confuse this lack of closers for weakness. Jace’s deck leans on them heavilty to close the gap and get there. Chandra, however, has brought threats at all stages of the curve. For her, the closers are just another set of tools to stitch things up, and you’ll be in little peril if you fail to draw any of them. 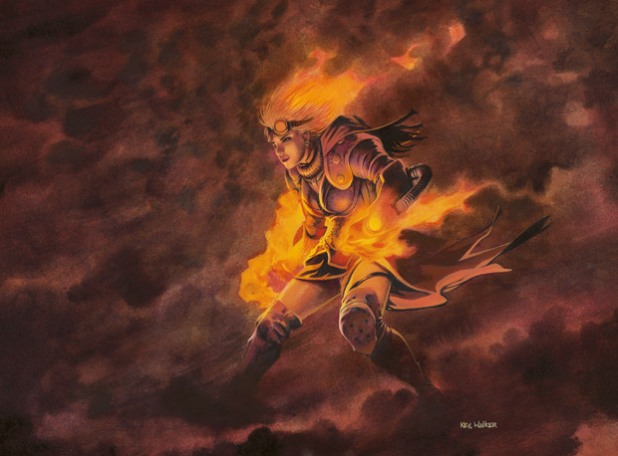 Complementing this, of course, is a very robust burn suite- every single noncreature spell (outside of Chandra Nalaar herself, of course) is burn and more burn, and the array of mana costs should easily ensure that you have the flexibility needed to cast them. Here’s the deck’s overall curve to illustrate:

Only have a smidgen of Red mana left over in a turn? A brace of Firebolts and Seals of Fire have you covered. Got a little more to spend? Howabout a pair of Incinerates, a Magma Jet and a Flame Javelin.

Got a bunch, or just want to finish off your opponent? Twin Fireballs, a Cone of Flame, a Demonfire, perhaps followed up by one of Red’s all-time closers- Fireblast– should get you there. Oh, and don’t forget those Firebolts have Flashback and can make a return appearance.

In both Duel Decks, the singleton copy of the relevant Planeswalker ensures that it’s a chance draw that’s a boost when you luck into it, but by no means central to the deck’s win conditions.

It should by now be clear that the deck is a racer, especially against it’s nemesis in Jace. While the mono-Blue offering wants to clog up the middle, stall and delay until its beaters come online, Chandra’s deck has to power through this. As always, you’ll want to save the burn either for creatures in your way, or to finish off a gravely wounded opponent. But there’s more than enough available, even considering attrition from countermagic.

On paper, I actually favour Chandra’s deck slightly, but it will be interesting to see when we put them head-to-head and see how they perform!