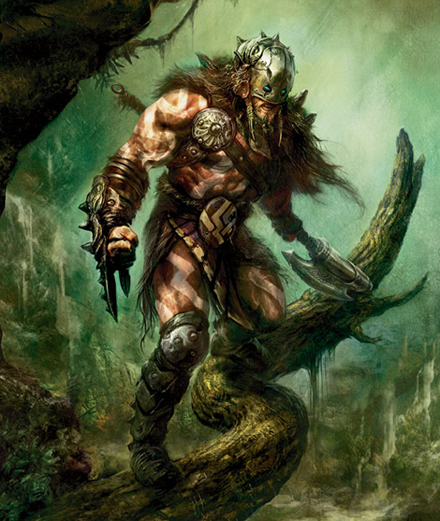 Just over a year ago, in Octover of 2009, the fourth of the Duel Decks series was released. Based upon the animosity between its two namesake planeswalkers as found in lore (as well as a novel that actually never ended up getting published, for reasons still unknown), the deck pits a mono-Green beats deck against a comparable mono-Black creation. It continued the tradition of the late-season, planeswalker-themed Duel Decks release begun with Jace vs Chandra, and continued with Elspeth vs Tezzeret.

Garruk’s deck is an interesting construction. For the most part, when you think of mono-Green beats, you tend to think of decks that ramp into the very large beaters Green has been known for for all of its history. That’s not an unreasonable expectation, but Garruk’s Deck bucks convention quite dramatically. Yes, you have the beaters, and yes there is ramp (albeit very little, more on that later). Instead, what’s most surprising is that the deck is split dead-even between creatures and noncreature spells. This is highly irregular- mono-Green beats tends to flood its deck with critters to ensure a steady stream of them, then slave its noncreature options to be ramp and a few support cards, like Giant Growth.

Despite their reduced prominence, creatures are still the deck’s sole win condition, and so in our analysis it is there we’ll begin. 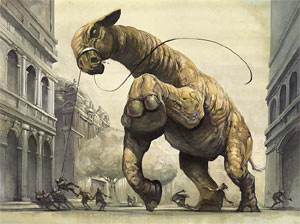 Knots Stronger Than Any Rope

For the creatures it does have, the deck is structured rather well. It has ample early options, a slight drop-off in the middle, and then some rather substantial and well-chosen back-end bruisers:

Early drops tend to come in pairs. The deck packs in two each of Basking Rootwalla, Wild Mongrel, and Albino Troll. The Rootwalla are a great choice, essentially a 1/1 for one mana that has some utility into the midgame for a reasonable cost. As Liliana’s Deck has a minor discard subtheme, the Rootwalla’s Madness ability is not only relevant, but even occasionally useful!

The Wild Mongrel is another intiguing early option. A 2/2 for two mana is something of a gold standard, but it also has a novel little twist: pitch a card away, and it gets +1/+1 and becomes the colour of your choice until the end of turn. Like the Rootwalla’s Madness, this is situationally useful. Against Liliana’s Deck, it means that the Mongrel has some rather delightful interactions, such as effectively immune to removal such as Snuff Out and Hideous End. The cost is steep, but perhaps someday you’ll live the dream of pitching a Basking Rootwalla to the Mongrel to pump it and turn it Black with a Bad Moon in play. Never say never!

The Albino Troll is perfectly positioned here as well. Of all the drop-slots in the deck you have the least options at three mana, so paying the Echo on the Troll while working towards your fourth land drop is a splendid play. In a nice bit of balance, Liliana doesn’t have many ways to deal with a 3/3 regenerator, but she does have a few (Snuff Out, Ichor Slick, even a fortuitiously-timed Fleshbag Marauder).

Beyond that there’s a touch of defense/ramp in a pair of Vine Trellises, and a pair of Wirewood Savages make up your only three-drops. Given that seven of your eighteen creatures have the Beast subtype, you can probably expect to draw a card or two from the Savage, though seldom much more than that. Unsurprisingly, Liliana boasts no beasts, so you’ll gain no extra cards there.

It’s in the higher-costs creatures that Garruk’s Deck begins to shine. The Ravenous Baloth is nicely-costed, and it’s activated ability gives you a sac outlet to gain from Beasts that were going to die anyway. The twin Blastoderms are houses, and never a welcome sight for your enemy. Black creatures have little to rival their size, and their removal can barely touch it (pray for a Mutilate, Lili). The Stampeding Wildebeests is a similarly aggressively-costed beatstick, and while the deck contains very few critters primed to abuse its drawback (Indrik Stomphowler is the only), there are enough cheap critters available to minimise its impact.

Rounding out your zoo you have a pair of the aforementioned Indrik, which are reasonably-costed with a useful ability (though have a care- the absence of a ‘may’ clause means that it can sometimes backfire). The Krosan Tusker is something of the best of both worlds, being both a late beater or an early ramp spell. Lastly, the Plated Slagwurm is almost unbeatable if you manage to get it into play.

With half the deck’s cards being noncreature, you have ample support for your creatures. To begin with, you have a light removal package here, which is rather refreshing considering that Green generally has no effective removal. The pair of Serrated Arrows are absolute gold, as they are an answer to Black’s many nettlesome utility critters (inluding Drudge Skeletons). Windstorm is an answer for flyers, but as a one-of should be saved for as long as possible when feasible. Lastly, Lignify is about as close to spot removal as you’re going to get in Green.

Beyond that there’s the usual combat tricks, though only a singleton pair- Invigorate and Giant Growth. You have a trio of high-quality creature auras in the Elephant Guide and pair of Rancors, the latter in particular being some of the best in the game. You’ve got ramp (two Nature’s Lores), card drawing (two Harmonizes), and a pair of noncreature creature sources (Beast Attack and Genju of the Cedars). Finally, you have a pair of closers (Rude Awakening and the ever-popular Overrun) and the big fella himself, Garruk Wildspeaker.

However matched, the Planeswalker Duel Decks are often susecptible to being very swingy based upon who gets out their Planeswalker. With each deck having one, you’ll typically find that most games see neither, but there’s just enough that do to sustain an element of chance. Garruk is one of the most solidly-designed ‘walkers thus far, being a perfect fit for Green and perfectly-costed. Liliana has some reach to strike at him, both in direct damage (Corrupt) as well as reach in the air, so you’ll want to use him as best you can immediately once he’s out.

Here is the final overall curve of the deck:

Beyond that there’s little left to the deck. All but three of your lands are basic, with the others being a pair of cycle-lands (Slippery Karst) and one final ersatz-critter, the Treetop Village. The creature content is solid, but it’s rather likely that you’ll frequently find yourself wishing a few more of them had been packed into the deck, particularly with Black suffering no shortage of removal.

Next time, we’ll be taking a look at Liliana’s contribution to this hate-filled matchup, before we assemble the decks on the field of battle and see who the true victor is. See you then!