In 2007, Wizards released what was to be the start of an innovative and highly collectible series of preconstructed decks that featured not one, but two decks designed to be played in opposition. This inaugural deck lifted a page out of lore and pitted the haughty Elves against the reckless Goblins (though their colours are aligned, the tribes need not be). This was enough of a success to prompt a Duel Decks release the following year.

For this one, Wizards tapped into their new and exciting permanent type (as well as intellectual property)- the Planeswalkers- and paired off the power of Red burn versus Blue control. Thus, Jace vs Chandra was born, and it seemed a winning formula, repeated the next year for Garruk vs Liliana, and again later this year with Elspeth vs Tezzeret. (The level of success- and the value of the decks- has been better covered by those with a financial angle on the game, such as here.)

Although the decks themselves are rather scarce (expect to pay about $80 new), are they worth the pickup? It’s hard to argue in favour of that high a pricetag for a pair of preconstructed decks (as you’re well on your way to buying a booster box at that point), but for the collector who enjoys the preconstructeds, is there actual play value here? Let’s find out. 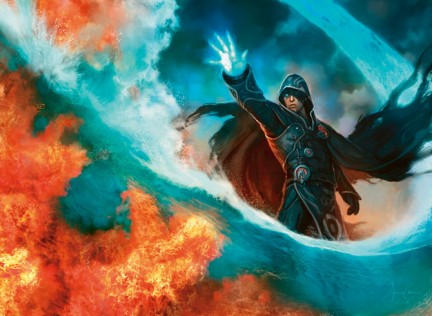 A Little Help From My Friends

The first things you notice about Jace’s half of the package are quite surprising- Jace’s deck is constructed like on a mono-Green model! Not only are over 66% of the nonland cards creatures, but take a gander at this intimidating mana curve:

Green decks can afford to be fat in the back-end because they have ramping options to make the costs more afforable. Blue, alas, has no such luxury.

Furthermore, much like a Green deck, the sparse supply of noncreature spells offers a token support of the deck itself- there’s nothing here that’s gamechanging in and of itself. There’s a smattering of countermagic (two Condescends, two Counterspells, and a Daze); some card draw (Fact or Fiction, Gush, Ancestral Vision); a jot of bounce (two Repulses); and a singleton Mind Stone for the faintest whiff of mana acceleration.

So is this the penultimate incarnation of Big Blue Beatdown? Not quite. Befitting Jace Beleren himself, there’s a great deal more going on here than it might seem on the surface to the casual observer. Indeed, the deck is far more subtle and clever than these initial observations would indicate.

Of the 23 creatures in the deck, there are but two of them that might be considered ‘vanilla:’ a 4/4 flying Air Elemental, and a Waterspout Djinn (same as the Elemental, but cheaper with a slight drawback). Every other creature brings a little something extra to the table, often emulating the very Sorceries or Instants that inhabit Blue’s segment of the colour pie.

Bounce: A pair of Man-o’-Wars act as early utility, with two other creatures following suit at higher casting costs (the Aethersnipe and Riftwing Cloudskate).

Card Advantage: The Weatherlight-era Ophidian is probably the clunkiest option here, as it must swing and connect to net you a card (in addition to forfeiting damage). The other options are a bit more elegant: two Fathom Seers net you extra cards when un-Morphing, while the Mulldrifter fuses a Bear with Divination giving you utility through flexibility with Evoke.

Utility: A few fewer options here, but there’s a pinger in the form of a Mawcor as well as some additional trickery from the Brine Elemental.

Bombs: In addition to the aforementioned Elemental and Djinn, there’s still another variant of the classic 4/4 flyer in the Errant Ephemeron, whose hardcast cost is seldom the way to go (taking advantage of Suspend is far cheaper, though requires some patience). Guile and the Quicksilver Dragon are also more than capable game-enders on their own.

The rest of the creatures defy such classifications, and range from the useful (the pair of Spire Golems are superb, and truthfully shouldn’t be scored too strongly against the deck’s mana curve) to the frankly underwhelming (a Bottle Gnomes and two Walls of Deceit).

So how does the Jace deck integrate? The suite of delaying tactics (countermagic, bounce) combined with the very heavy back-end of the mana curve all but demand that this deck go into the late-game to win. A quick victory here will almost certainly be a consequence of a dreadful draw or mana screw/flood on the part of your opponent, because the tools really aren’t here for an urgent and sustained early aggro strategy.

Instead, the Jace player will want to contain, contain, contain, leaning on the back of the defensive-minded bodies in the deck to clog up the red zone. The extra card draw will then help dig for one of the deck’s aerial closers.

Try and save some counters if you can to protect your closer. Although the top-tier ones (namely Guile and the Quicksilver Dragon) have their own built-in defense machanisms to thwart their demise, many of the other 4-toughness flyers will be vulnerable. They need not be kept alive long- Chandra’s deck is light in the air and has little but burn for defense.

We’ll soon have the chance to see how the deck plays out, but first we’ll be doing something a little different. Typically we’ve kept the deck analysis post and the playtest post back to back, but this time we’ll be taking a slight detour. Before sleeving up Jace for the field of battle, we’ll be popping over to Chandra’s side of things and seeing how it looks. Join us then!