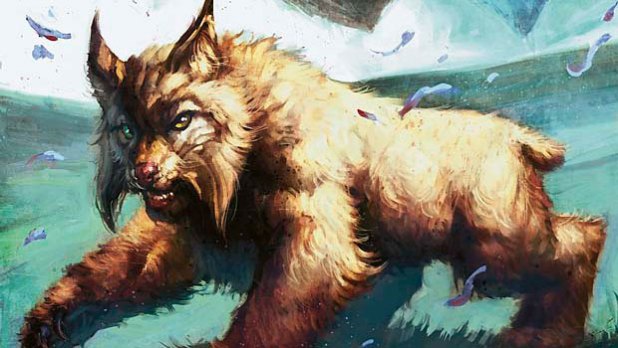 We’ve reviewed Zendikar. We’ve covered Rise of the Eldrazi. And even before these we had immediate coverage of Scars of Mirrodin and Magic 2011. Finally, with the tackling of Worldwake, we’ll have every Standard-legal set sorted out before Mirrodin Besieged is released early next month. It’s a pleasing realisation, even as the mind wonders that at the current rate of review if we’ll ever actually run out of precons while waiting for new ones!

It’s in that spirit of exploration that Jimi and I took out customary places opposing one another on the battlefield that is the kitchen table. Deprived of her preferred option (Rapid Fire), she instead sought to console herself by smashing it with a mono-Black flurry of Vampires.

Here are the notes from our confrontation.

Living the dream, I get out a turn 1 Steppe Lynx, while Jimi’s Vampires are content to drop a Swamp and lurk. I swing in for 2 with the Lynx next round, drawing first blood, then pass. Jimi drops a second Swamp, then gets on the board with a Ruthless Cullblade. Still, I have a nice curve with what’s in hand, and extend an advantage with a turn 3 Goblin Roughrider after attacking for 2 more with the Lynx. Now Swamp this time, it’s a Piranha Marsh instead, and Jimi keeps the Cullblade home while she summons a Child of Night.

Now turn 4, I step on the gas by playing a Plains and a Kor Cartographer. The Lynx, now double-pumped, swings in for 4 and he’s not alone. The Roughrider gets his business done too, and Jimi falls to 9 life. Ready to counter, Jimi presses forward with both her Vampires in return. I pick off the Child of Night with the Cartographer (giving Jimi 2 life from the lifelink), then watch Jimi bring out a Vampire Nighthawk.

Fortunately, I have an answer as Rapid Fire does its job. I have a Searing Blaze in hand but no land, but I draw a Pilgrim’s Eye– perfect! Out comes the Eye, fetching me up a Plains and I use my lad two Mountains to Blaze out her Nighthawk. Following that up with a 5-point attack leaves Jimi in dire straits, her life total now at 3. I’m at 17.

She manages to wipe my hand, though, with a kicked-out Bloodhusk Ritualist, forcing me to pitch my Geyser Glider and Ruin Ghost. A setback, but not a terminal one.

Now turn 6, I sail in with the Pilgrim’s Eye for 1, then play a Cosi’s Ravager. If I can draw a land next draw, it’s game. Jimi doesn’t give me the opportunity, as she dispatches the Ravager with a Feast of Blood after summoning a Pulse Tracker. The Feast puts her back up out of burn range with 6 life, and it’s back to the drawing board. The Vampires are proving surprisingly resilient, and Rapid Fire can’t seem to close the deal.

Turn 7 then sees me swing with the team, looking to keep the momentum going. Jimi trades the Ritualist for the Roughrider, then chumps the Lynx with the Cullblade, and ends up taking only 1 damage from the flying Eye. I know I’m in trouble when she casts Diabolic Tutor on her turn. She then plays a Ruthless Cullblade and passes. Knowing she’s Tutor’ed up one of her bombs for next turn, I need an answer and I need it now.

The Magic gods have mercy on me, however, in the form of a topdecked Act of Treason. I nick her Cullblade, which is now a 4/2 since Jimi’s below 10 life, and paired with the Eye it finishes her off.

Jimi opens with a Piranha Marsh, while I live the dream a second time with the Plains/Steppe Lynx opener. Neither of us have a turn 2 play outside of land, but the Lynx starts his dirty business and takes Jimi to 18.

Turn 3 sees Jimi play a Swamp and pass, and she’s in trouble. Vamps decks typically need fast starts to do well, and her deck be outclassed fairly quickly on the ground. After swinging for 2 more with the Lynx, I play a Prodigal Pyromancer. Bad news for Jimi, as it can ping out many of her critters, and she correctly Hideous Ends it immediately. Next turn, she gets some boots on the ground in the form of a Child of Night, then passes. Once again I have a turn 4 Kor Cartographer turbocharging my Lynx, and it it swings in for 4. It’s now a 12-17 game.

Another Piranha Marsh greets me on turn 5, but Jimi has no other play and passes. Missing my first land drop, I attack for 2 with the Kor Cartographer and Jimi surprisingly trades it for the Child. I replace it with a Geyser Glider and pass. Like the Pyromancer, the Glider is not long for this world as Jimi resolves a Brink of Disaster on it, turning it into a full-time defender. She then hits my hand with a Mire’s Toll. She has three Swamps in play, I have four cards in hand, but she doesn’t have the luxury of time. I reveal a Magma Rift, Kor Firewalker, and Cosi’s Ravager, and the Rift heads off to the graveyard. Back to me, I draw a Mountain and play it, letting my Lynx head in for 2, then show Jimi what that fourth card in my hand was as I cast the Mordant Dragon. Whoops!

Jimi’s turn 7 Bloodhusk Ritualist comes a bit too late, but wipes my hand all the same. Back to me, I send in the Dragon and pump it three times, hitting Jimi for 8 and exploding the Ritualist. It looks like I’m on the verge of a tidy win, but then the game takes a detour.

Jimi’s turn 8 play is the Butcher of Malakir, which is enough to stall my Dragon while I fish for answers. I have a Searing Blaze in hand, but at 4 life she’s just beyond reach. Back to me, I draw a second Blaze, and now all I need is a land to close the game out.

Like a cornered rat, the Vampires refuse to go easily, and out comes Anowon, the Ruin Sage the next turn. My position has gone from standoff to precarious with one card, as at best I can trade the Dragon for the Butcher, leaving Jimi with a virtual lockdown until I can get my removal off (and assuming she doesn’t get any lifegain, which her deck has the capability to do).

Fortunately, it comes the very next turn as I draw a Plains. I have just enough Red mana available to drop down both Searing Blazes, taking her out.

This game starts screaming right out of the gate and never lets up. Jimi starts with a turn-1 Pulse Tacker, while I amazingly hit the trifecta with a third consecutive Plains/Lynx opener. Jimi swings with the Tracker on turn 2, then follows up with a Ruthless Cullblade. Playing a Plains, I hit back with the Steppe Lynx, and we’re at 18-all heading into turn 3.

Jimi attacks the next round for 4, then I swing for 2 more with the Lynx following it up with a Kor Skyfisher (bouncing- and replaying- the Lynx). Next turn, the Skyfisher takes a Feast of Blood on the chin, then Jimi’s back in for 4 and I’m in trouble. My life is now at 10, and her Cullblade will be an even worse threat next round. I attack with the Lynx (taking her down to 18 again), then play a definsive-minded Cosi’s Ravager.

The Ravager gets blown out by a Hideous End, and with a 6-point attack incoming I’m down to 2 life. I replace the Ravager with a Grotag Thrasher, and keep the Lynx at home to block. Relentless, Jimi swings in again with the team. The Tracker hits me for 1 as his special ability, but I block him with the Thrasher to kill him- he cannot be permitted to live for next round or I die during the attack. That means I have to chump the Lynx to the Cullblade. It’s all fairly academic, though, as Jimi follows up with a Consume Spirit to the face for the win.

In all three games, Rapid Fire got exactly what it most wants- an early start to the creature arms race- and in two of those engagements it emerged victorious after following it up with a succession of threats. In a deck that thrives in the midgame, that’s a very welcome leg up. Of course, your odds of drawing a first-turn Lynx are about 17%, and thats not considering whether or not you have the requisite Plains to play him. In other worse, it can’t be relied upon.

Your two-drops being strong. End to end there’s not a weak play here. The Kor Firewalker is your biggest liability (because of his solid-White casting cost), but still quite reasonable. Beyond that you have the Skyfisher, Ruin Ghost and Fledgling Griffin- all useful at nearly any point in the game.

Your three-drops being mediocre. Pilgrim’s Eyes are useful role-players, but unless you’re mana-hosed they won’t look too sexy. Indeed, in an aggressive deck, three-mana ramping is not all that useful, though to be fair you’ll have some use for the extra mana here. The Prodigal Pyromancer is always useful, though again why he wasn’t a Cunning Sparkmage instead is a dreadful oversight. Lastly, the Goblin Roughrider is an extra body, sure, but the inefficiency of a 3/2 for three mana starts to strain.

Your four-drops being shaky. Sadly, only the Dragon Whelp is really exciting here. For all their tricks, Cosi’s Ravagers never let us forget that they were a 2/2 for four mana. That’s a painful price to pay. Equally underwhelming is the Kor Cartographer- by the time you get to four mana, for the most part your mana troubles should be behind you. Having an extra landfall trigger helps, but we’d prefer a better threat. After the landfall shenanigans wear off, you’re left with- again- a 2/2 body.

Your closers will do what they need to. If you roar at the two slot, growl at the second and whimper at the third, at least you can scream at the top of your mana curve. Mordant Dragon and Geyser Glider are both very strong threats, and the Grotag Thrasher can help your ground game get you there.

When it works, it works, but expect to have plenty of games where you just get outclassed and outsized by your more-efficient opponents.

Misses: The rest of the creatures at best break even, and many will fail to pull their own weight Prodigal Pyromancer an inexcusably bad choice here; potential of Ruin Ghost + specialty land shenanigans went largely unfulfilled