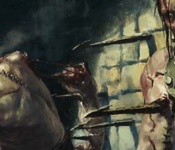 It’s time to take Duel Decks: Blessed vs Cursed to the battlefield to see how it plays out, after having taken a close look at both decks. Joining me is Phil, taking the role of Innistrad’s Blessed. Let’s see how this first clash shakes out.

On the play for our opener, I lead with a Swamp while Phil counters with a Plains and Doomed Traveler. Next turn, I rip a Screeching Skaab off an Island, happily sending two Zombies tumbling into my graveyard. For his part, Phil casts Gather the Townsfolk, and we’re off!

Now turn 3, a timely Diregraf Captain sets up the game ahead for me, letting me turn the Skaab sideways for 3. For those keeping score at home, it’s worth noting that I’ve drawn a Mindwrack Demon, but am not quite comfortable casting him without being closer to dementia. Phil misses his land drop, but goes back up to 20 from a Cathedral Sanctifier.

Next turn, I swing in for 3 more with the Skaab, which Phil trades out with his Sanctifier and Traveler. My Captain syphons a life from Phil in response, while Phil gets a 1/1 Spirit token to replace the traveler. I then summon a Ghoulraiser, getting back my Screeching Skaab from the graveyard, and finish with a Diregraf Ghoul. Busy turn! For Phil’s part, he attacks in for 1 with the Spirit to take me to 20, then passes.

Now turn 5, I swing in for 6 with the Ghoul and Ghoulcaller. Phil Rebukes the Ghoul, killing it and triggering the Captain again. I then mill off two more creatures into the graveyard when I recast my Screeching Skaab, then pass. Over to Phil, he brings out the Moorland Inquisitor, then girds a 1/1 Human token with Bonds of Faith to make it a 3/3. The 3/3 turns sideways, and glides in for damage alongside his 1/1 Spirit token.

Down to 17 life on turn 6, I counterattack for another 6 with my Screeching Skaab and Ghoulcaller. Phil swaps the Inquisitor for the onrushing Skaab, dropping to 11 life after the Diregraf Captain trigger resolves. I then summon a replacement Skaab, landing yet another two creatures into the graveyard. Phil finally solves the nettlesome Captain with a Fiend Hunter, then counters in with a regular Human token and Spirit. to take me to 16.

Now turn 7, I return my Diregraf Captain to play by hitting the Fiend Hunter with Sever the Bloodline, knowing that if I don’t I risk losing the balance of momentum to Phil. I attack for another 6, and Phil trades his 3/3 Human token for my Ghoulcaller. He’s now at 7 life, with me at 17. Over to Phil, he then taps my Captain with a Topplegeist, then adds an Elder Cathar. A quick look at Phil’s graveyard confirms he’s hit delirium, and that Topplegeist is going to be a concern.

Next turn, the Topplegeist triggers at my upkeep and Phil taps town the Skaab. I then drop a brutal Unbreathing Horde, which enters play with eight +1/+1 counters on it. Phil simply sends in the Spirit to nick me for one and passes. Back to me, Phil wisely uses his Topplegeist to tap down my Horde. I then swing for 3 with the Skaab, which Phil trades for his Elder Cathar. The Cathar’s death trigger kicks in, and Phil puts two +1/+1 tokens on a Human token. Over to Phil, he plays a Butcher’s Cleaver and equips it to his Human, which is now a 6/3 with lifelink. He swings in with everything, and I’m compelled to trade my Captain for his equipped Human. At the end of the turn, I cast Tribute to Hunger to claim Phil’s 1/1 Spirit, so he’s down to a single Topplegeist.

Now turn 10, that Topplegeist keeps my Horde tapped, but I go for broke with the Mindwrack Demon. Milling four, I hit paydirt when a Swamp tumbles into the graveyard to hit delirium. For Phil’s part, he equips the Topplegeist with the Cleaver and passes. Next turn, I take Phil down to 8 after cutting in with the Demon, but Phil sees a glimmer of resistance flare when he adds the Geist of Saint Traft, then attacks for 4 with the Topplegeist to drop me to 13.

Now turn 12, I counterattack for 4, cutting Phil in half. Phil untaps and swings with the side, but we both know the game has run its course as he can’t quite close the deal.

Phil opens the second round with a Topplegeist, then Gathers the Townsfolk on round 2. For my part, a second-turn Screeching Skaab is my opener, milling off a creature and a land.

Now turn 3, Phil plays another Topplegeist to tap down my Skaab, then swings with the team for 3. Back to me, I counterattack for 2 with the Skaab before adding a Scrapskin Drake. Phil then bounces the Drake with a Mist Raven, then attacks for a further 4 points of damage. Back to me, I pick off one of the Topplegeists with a Tooth Collector.

A turn-5 Pore over the Pages precedes another 3-point assault, and just like that Phil has cut me in half. However, that creature I milled off on turn 2 with my Skaab? It was a Harvester of Souls, which gets yanked back to active service with Dread Return. Just like that, the game has pivoted. I attack in for 2 with the Skaab, taking Phil to 16 and pass.

Next turn, Phil plays a Seraph Sanctuary, going up 1 life, then adds a Goldnight Redeemer for another 9 life (including another 1 from the Sanctuary). That puts him at 26, and me down to 7 when he attacks in the air. Back to me, I exile the Angel with Sever the Bloodline, then send in the Harvester for 5.

Now turn 7, Phil plays an Emancipation Angel, bouncing back the Mist Raven, then recasts it to bounce my Harvester of Souls back to my hand. It’s a backbreaking play, and he sends in the Topplegeist to nick me for another 1. Down to 6, I summon the Scrapskin Drake, followed by a Diregraf Ghoul, but the jig is up. Next turn Phil sends in the Angel to take me to 3, and, drawing nothing helpful, I scoop the following turn. It’s going to three!

I’m on the play for the decider, and lead with a Diregraf Ghoul, while Phil pads his life total early with a Cathedral Sanctifier. I swing in for 2, and Phil lets it pass. He then summons another of those annoying Topplegeists.

I hit for another 2 on turn 3, then add a Scrapskin Drake, while Phil counters with a Doomed Traveler. Next turn, I keep the pressure on with a 4-point attack, and Phil finally takes the bait. Gang-blocking the Ghoul with his Traveler and Sanctifier, it’s effectively a trade as he gets back a 1/1 Spirit token with flying. It’s all he can do, however, as his next turn is a blank.

Now turn 5, I hit in again for 2 with the Drake, then add Relentless Skaabs. Phil, stuck on two lands, deploys a Sharpened Pitchfork and passes. Next turn, I hammer in for 6, taking Phil to 9. Phil equips the Pitchfork to his Topplegeist, then passes after discarding down to seven.

I attack in for 6 on turn 7, and Phil chump-blocks both. One Moan of the Unhallowed later, and Phil’s fate is sealed. He scoops next turn, a disappointing end to a well-fought game.

A shame about that last match, since a win when your opponent is resource-impaired (either paucity or excess) doesn’t give you a lot of insight into your deck, but luckily we had two solid matches beforehand to put Cursed through its paces.

In short, this one wasn’t the greatest Duel Deck in the series history, but it was certainly fun to play.

On the plus side, you had a very solid creature array. Sure the deck list sees you doing most of your work with creatures given its paltry noncreature suite of cards, but then that seems to be the face of modern Magic. In the most recent Making Magic column, head designer Mark Rosewater highlighted things that he often gets requests for from players. Nestled in amongst game mechanics and planes to (re-)visit, was this gem:

The shift toward a more creature-centric game has many fans, but there are some older players who liked the era where creatures mattered far less and the game was more about spells.

You could hardly find a better summary of the deck. The spells almost didn’t feel like they mattered, since so much focus was on the creatures and their shenanigans. Removal is critical, of course, but even that wasn’t all that good.

Still, the deck had some splendid interactions, such as the premature Harvester of Souls thanks to Dread Return, and the Unbreathing Horde in a Zombie deck with loads of self-mill. Overall, the deck worked quite well for its purpose, and that at least is a success.

For the downside, its focus on creatures meant that the efficacy of play was highly driven by the draw. Get the right creatures, and you are in the fast lane, but get the wrong ones and drudgery awaits. You can say that about any Magic deck, of course, but there’s something about singleton decks (or largely singleton decks) that can compound the problem. Duel Decks are built for “occasional interactions.” It’s a way to keep them fresh, interesting, and highly replayable, but it can serve up some mediocre games as well.

Thanks to the Zombie tribal theme on offer here, that was somewhat mitigated. On the other hand, what do you say about a deck that’s fun to play, but not especially memorable?

Hits: Solid tribal theme can help tie the deck together no matter what you draw; solid creature press; some fun interactions between cards; well-matched against the counterpart deck

Misses: Deck effectiveness can still vary widely based on draw; fun, but not especially memorable compared to other Duel Decks; removal poor

Read more from Blessed vs Cursed, Uncategorized
← State of the Site – March 2016
Oath of the Gatewatch: Vicious Cycle Review (Part 2 of 2) →
7 Comments Post a comment