Here’s to hoping this post finds everyone in good spirit and good health! It’s been awhile since I’ve updated, but I was struck today by a particular comment left by Limbonic_Art.

So sad this site is now almost dead… Is it all because of the store?

This thoughtful comment caught me on a few levels. First, though we haven’t been updating, the site is far from dead. It’s still charting between 800-1000 views a day, which is pretty amazing. That tells me that Ertai’s Lament has succeeded in one of its aims, which is providing a resource for those looking into the older decks.

Of course, for those looking for signs of life itself, such as Limbonic, it certainly could appear moribund thanks to the lack of visible activity. That brings me to the next point- if we haven’t been updating in just over a month… what have we been doing?

First, we’ve been running Moonlite Comics. I knew going into it that it would be a lot of work, but even at my most generous estimates I vastly underestimated how much goes into it. Right now, I’m essentially working two full-time jobs, seven days a week. It sadly doesn’t leave a lot of time left over for other things, no matter how much aspiration is there. I’m steadily working towards finding the right balance between the store, my regular day job, and everything else, so that’s a work in progress.

There’s also one other big reason for our absence. 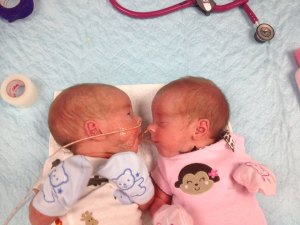 Say hello to Declan and Lorcan Kirkman! Our wee ones entered the world together on 16 September, a full TWO MONTHS ahead of schedule! It’s been unimaginably hectic around here on top of everything else, but they’re fighters the both of them and they’re doing even better than we dared to hope. No major issues to speak of as yet, and two days ago they both surpassed their birth weight after the initial drop in weight most babies experience. They’re thriving (but prayers are always welcome!)!

Jimi hasn’t left the hospital since they arrived, making a huge sacrifice for our babies in terms of sanity and exposure to horrible food. Sam and the boys have stepped up to help run the house, so we’re all getting through.

So yeah… things have been a little busy around here, but Ertai’s Lament is far from dead.

I remember Gathering Magic before it was Gathering Magic, when it was just a really popular casual Magic site run by two guys. As the end arrived and their updates became less and less, you couldn’t shake that feeling of impending doom. Not so here. We’l be back very soon with a lot of catching up to do. I’ve already been poking around the Intro Packs of Theros, and one of them in particular blew my socks off.

Thanks for reading, and see you soon!