2007-08 Precon Championships: Round 7 and the Leaderboard 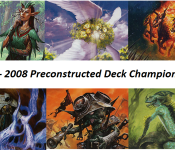 It’s a truism we’ve repeated many times, but to again borrow the well-worn expression from football, on any given Sunday, anything can happen. This past weekend saw a succession of unlikely events that only reaffirmed it.

First up was the triumphs and tragedies on the battlefield. The Tenth Edition decks continue to impress, with some solid performances leading up to an all-Tenth Edition divisional final. Only eight of our predictors gave Cho-Manno’s Resolve a chance, and it proved a dark horse worth backing. “It may be a long shot,” noted Icehawk, “but it’s not like it hasn’t surprised me before!” Indeed, many have started to conclude that these 40-card constructions have the power of consistency on their side, being able to find their removal and bombs much more readily and steadily than their opponents. Certainly the powerful Life Drain was taken by surprise by the upstart’s upset, as many were expecting that deck to go far (your author included).

Meanwhile, Kamahl’s Temper earned a point for most of the Prediction League. Few gave much hope to Superabundance. “Never underestimate a mono red deck that packs fistfuls of haste and burn when it goes up against a removal-less opponent,”  predicted acollins1773. “Temper slams this one home.” Said Triumph, “Kamahl’s Temper, though, wow! Some of the best burn / removal I’ve seen in a precon.” To its credit, Superabundance pushed it to three games, but the outcome wasn’t in a great deal of doubt.

Off the field, there were some surprises as well. For one thing, no frontrunner picked up more than 1 point this week. We still haven’t seen any one predictor begin to build up an unassailable lead, and this one looks like it’s going to be close right down to the wire. Secondly, solid performances from Icehawk and Karnival picking up all three points on the day vault them from the middle of the pack into contention. Icehawk, a past champion, is now right in the hunt tied for first, with Karnival only a couple of places behind. Anything can happen indeed!

Now let’s take a look at the updated leaderboard. As always, please bring any discrepancies to our attention and we’ll be happy to correct.

Now, let’s turn our attention to this Sunday’s match-ups!

We’re entering the final of the four divisions, the Lauer. With only one bye, there’s three matches on offer, and a great time to pick up some points. Someone’s going to look to stake their claim to the massive prize package awarded to the winner. Will it be you? 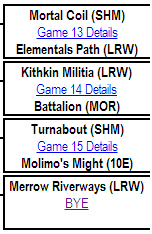 Please leave your predictions in the comments below for each of the three games (13, 14, 15). To assist with your decisions, here’s some background on each of the decks in the division.

Detail: If Lorwyn introduced us to the Kithkin, Morningtide went one level deeper and brought us class-based tribal. Battalion is all about the Soliders, mainly from the Kithkin clachans but with a few others lending their arms. With a backup air force and access to the reinforce mechanic, this is one weenie deck well-suited for the longer game. (Reviews)

Detail: A rare five-colour deck, this one is base-Red instead of the more expected base-Green. Using your Elementals early for their evoke can pay off in a big way when the Horde of Notions hits the table, but largely we found the lack of removal a bit distressing. Points for ambition, but will it be enough to carry the deck through where it counts? (Reviews)

Detail: Before there was Battalion, there was Kithkin Militia, the race-tribal deck from Lorwyn that gave us the Kithkin. As expected, this is something of a rush deck, though with an air force backup should the ground game get too congested. A trio of Oblivion Rings are a hopeful sight for those looking for spot removal. (Reviews)

Detail: The shining star of Lorwyn’s crop of decks, Merrow Riverways got very high marks almost across the board. Although it, too, had the vulnerability to fall into overly-complicated game states that bedeviled much of the block, overall the Merrow got it right. It’s very inconsistent, in that broadly-speaking you either assemble your Merrow engine and win, or don’t and lose, but what a ride along the way! (Reviews)

Detail: It’s come down to the end for Tenth Edition. Two of its decks are divisional champions. Two of its decks went down to inglorious defeat. Which will it be for the mono-Green Molimo’s Might? We’re seen consistency on the side of these 40-card decks, but of course consistency is only as good as the tools you’re consistently finding. (Reviews: not available)

Detail: This deck is all about shenanigans with -1/-1 counters, so it should have a few ways to get them onto the battlefield. Will that give it the edge in removal in an environment where those types of effects are precious and dear, or will it be a touch too fancy for its own good? (Reviews: not available)

) mechanic, rewarding you for finding ways to get your creatures tapped (such as, say, attacking!). In addition, it also offers you convoke, a way to use your numerical superiority to generate card advantage, too. Weaknesses?  There may be some, but the Elves aren’t telling! (Reviews: not available)

That’s all for now! We’ll have the matches up this Sunday, and will happily accept predictions any point up until the matches post. Best of luck as we approach the home stretch to those in our Prediction League!