Duels of the Planeswalkers (2009) Expansion Pack 3: Master of Shadows Review (Part 2 of 2) 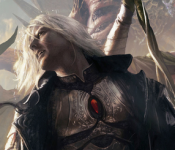 Before Sorin was the creator of Avacyn and preserver of Innistrad’s humanity, he was a mono-Black planeswalker who showed up in Zendikar as the plane’s volatility was coming to a head. Today we take his Vampire-themed Duels of the Planeswalkers deck into battle to run it through its paces. Acting as foil is Sam, who’s running the White-weenies-n’-gear brew Weapons of the Warrior.

Sam’s on the play, and opens her account with a Kor Duelist which I follow with a Vampire Lacerator. Next turn, she then fields a Kitesail Apprentice, with neither of her Soldiers intimidating enough to prevent the attack of my Lacerator- not before he nicks me for a point on my upkeep, of course. The attack resolved, I play a second Lacerator and pass.

Now turn 3, Sam then brings out a Kor Hookmaster, “detaining” my untapped Lacerator. That lets he other troops slip past for another 2 points of damage, leaving me at 17. Back to me, I immediately take 2 more points of damage from my Lacerators, after which I send in the first one through the red zone. Sam happily accepts the trade for the Hookmaster, its job done. I replace my loss with a Vampire Aristocrat and end the turn. Back to Sam, she plays another Hookmaster, tap/freezing my Aristocrat. She attacks past for another 2, and I fall to 13. After going to 12 during my upkeep from the Lacerator’s relentless insistence, I Disfigure the Hookmaster and attack with the Lacerator for 2 more. Sam goes to 16, and I then add a Bloodrite Invoker before passing.

Now turn 5, Sam plays a Plains and passes. Back to me, I attack in with the Lacerator and Aristocrat for 4, taking her to 12. I then bring out a Mindless Null. Back to Sam, she then plays an Elite Vanguard. I go down to 10 during my upkeep, but then shoot back up to 14 when I Feast of Blood the Vanguard. This lets me past for 6 with the Lacerator, Aristocrat, and Null, and Sam’s cut in half.

A turn-7 Captain of the Watch promoses to stabilise the board, with its lord-style buff of all Soldiers and trio of tokens. This emboldens Sam, who then attacks for 4 with the Apprentice and Duelist. Back to me, I Hideous End the Captain, and it’s the death-blow that Sam never recovers from as I ride the Vampires to opening-round victory.

Again Sam leads with a Kor Duelist, followed next turn by a Stoneforge Mystic (tutoring up a Trusty Machete). I answer with my first creature, a topdecked Pulse Tracker, then pass back. Sam then equips the Duelist with the Machete, giving it double strike as it hammers me for 6. For my part, I play a Swamp and pass.

Now turn 4, Sam again turns the Duelist sideways, but I simply give it a Hideous End, nicking Sam for 2 life in the process. She then replaces it with an Armament Master, then adds a second Machete to her board. Back to me, I Disfigure the Master before it can cause any trouble, then play a Vampire Nighthawk. Back to Sam, she then powers out a Pennon Blade with the Mystic, adding a Bone Saw– the limit of what she can do with the three mana she’s got. Back to me, I attack in with the Nighthawk and Tracker, taking her to 14 and me back up to 15 thanks to the Nighthawk’s lifelink. I then summon a Vampire Aristocrat and end my turn.

Sam next fields a turn-6 Veteran Armorsmith, equipping it with a Machete after leading with a Plains. I simply Feast of Blood it away, then swing for 4 more with the Nighthawk and Aristocrat. With Sam at 10, I follow with a Child of Night and pass. Back to Sam, she next tries a Veteran Swordsmith and Valiant Guard. Undeterred, I send in everything for 7, with the Pulse Tracker pinging Sam straight off the bat. It’s the beginning of the end for Sam, who simply cannot block the worst threat- the Nighthawk. She blocks as best she can, but after the dust clears I then throw in an unkicked Heartstabber Mosquito to ensure the game in the air, and she scoops after her next draw. Too much equipment for Sam, not enough bodies to carry it.

Looking to avoid the sweep, Sam leads with a Trusty Machete which I meet with a Vampire Lacerator. Next, she summons a Kor Outfitter, letting her get a free equip of the Machete. After taking 1 from the Lacerator at my upkeep, I summon a Blood Seeker and pass right back.

Now turn 3, Sam next deploys a Veteran Swordsmith, losing a point of life from my Seeker. She then attacks for 5 with the Outfitter, and I fall to 14. Over to me, I fall another point from the Lacerator, and pass after playing a Swamp. Sam then plays a Kitesail next turn, equipping it to the Outfitter. This lets her swing in for 6 in the air, so I snap off a Hideous End to snuff it out. Back to me, I then Disfigure the Swordsmith, letting me attack in for 3 with the Lacerator and Seeker to leave Sam at 14. One Child of Night later, and I’m ending my turn.

Now turn 5, Sam again seems to have a case of the too-much-gear, not-enough-dudes syndrome as she plays a second Kitesail followed by a Trusty Machete. I simply walk in for another 5 points of damage, going up to 14 thanks to the Child’s lifelink. Sam whiffs next turn, passing after a Plains. I hammer her for another 5, going to 16.

A turn-7 Kor Hookmaster looks to give Sam a moment’s peace as she locks down my Child, then equips it with a pair of Machetes. At the en of her turn, though, I simply Hideous End it to set up the win.

Master of Shadows delivered on its promises in the playtest, promising aggressive play coupled with a solid removal package to help keep the attack lanes clear. In addition, the lifegain subtheme did well to keep the deck topped up even as its own Lacerators fed off it. Although the Kor weren’t done any favours by their lack of pinpoint removal, this game was the Vampire’s to win and they claimed a well-earned sweep.

One running gag we have here is how many sterling matches we have in the pre-game friendly, the match we use to ‘warm up’ and get a feel for our decks. Along the same vein as a watched pot that never boils, some of the best interactions or scenarios occur when the match isn’t being recorded. In the friendly for this match, I managed to bring out a couple of lifelink options, then found a quick Sanguine Bond that crushed Sam out in a matter of two turns after a Final Revels pumped up the side. There will be a number of times that the card is a relatively dead draw, but it’s a glorious one in those times where you can get the right pieces in play.

The removal package deserves special mention, consisting of a good amount of spot removal as well as a sweeper. Comprised of a half-dozen cards it’s not so much removal that you’ll be looking for excuses to use it, but it’s just what this deck needs to keep the enemy defenses in check. If there’s a weakness here its in the weakness shared by all such strategies, that weenie-heavy armies can get bogged down in the red zone once an opponent starts finding larger threats. It’s also useful to make note of the Vampire Nocturnus here. Regrettably, I didn’t get a chance to play it, but by offering a free Levitation as well as Unholy Strengths all around, it can break through any kind of paralysis on the ground while moving the game towards a quick end.

Hits: The mythic Vampire Nocturnus brings along a brutal power level that helps address one of this type of deck’s greatest weaknesses; strong removal suite, including a sweeper; aggressive attacking creatures make for a fin and quick burst right out of the gate; lifelink subtheme pairs well with both the life loss of the Lacerators and the Sanguine Bond for a combo

Misses: The deck is suscpetible to stalling out against an opponent playing larger creatures, and can find itself quickly falling behind given how much of it is comprised of cheaper, smaller creature options