Duels of the Planeswalkers (2009) Expansion Pack 3: Master of Shadows Review (Part 1 of 2)

Although Magic is a game filled with larger-than-life characters, it tends to occupy a bit of a fixed position for many of them. Part of this is due to the ever-changing nature of the game, where we seldom get to stay in one place for more than one block at a time. As a result, there’s a tendency towards the two-dimensional, as there just isn’t enough time to show development and personal growth.

The planeswalkers, however, give Wizards some opportunity for change, however, as they are and shall be a fixed constant in the game. It only stands to reason, then, that as we see the same characters introduced in new surroundings, we can expect to see at the very least some mechanically-represented signs of change. For five planeawalkers, however, the shifts have been even more pronounced, so much so that ultimately they have experienced a change in colour identity.

This isn’t without precedent in the history of the game, where colour symbols have been used to signify seismic shifts in a certain character’s makeup. The first to do so was Ertai. Introduced in Exodus as Ertai, Wizard Adept, he was tragically left behind when the Weatherlight left the plane, captured, and converted into a Phyrexian. This shift to Black- as Phyrexia was defined at the time- was then woven into Planeshift’s Ertai, the Corrupted. Other notable examples include the spiritual awakening that transformed Kamahl, Pit Fighter into Kamahl, Fist of Krosa, and the resurrection through undeath that we’d see transform Balthor the Stout into Balthor the Defiled– and again much later with Mikaeus, the Lunarch into Mikaeus, the Unhallowed.

In the planeswalker era, this has been similarly scarce, but our featured ‘walker today is the last of  the five to have made a transition. From his initial printing in Zendikar as Sorin Markov, a mono-Black planeswalker, we’ve been given an updated version in Dark Ascension with- perhaps surprisingly- the addition of White. This is a volte-face from the norm, where the previous three took on a darker aspect. Ajani Goldmane was the first, adopting Red to become Ajani Vengeant, searching to avenge the killing of his brother. Sarkhan Vol swapped Green for Black to become Rise of the Eldrazi’s Sarkhan the Mad, while another Alara-walker, Tezzeret, went from being ‘the Seeker’ to an Agent of Bolas. Finally, Garruk Wildspeaker was transformed by Liliana’s veil-curse into Garruk Relentless/Garruk the Veil-Cursed, similarly embracing Black.

In 2010, though, when Master of Shadows was released as a Duels of the Planeswalkers expansion for the XBox, PS3, and computer, that turn to a (relative) good was still some ways off for Sorin, only recently introduced in Zendikar. His deck, then, is fittingly mono-Black, aggressive, and swarming with hungry Vampires.

Feed Before the Sun Rises

With a full twenty-six creatures, all but four of which cost three mana or less, this is a high-pressure deck that looks to overwhelm in the red zone- though it does have a few aces up its sleeve. The risk with any kind of weenie/swarm strategy is that once an opponent manages to stabilise, the prospects for victory rapidly diminish. The objective, then, is to not let the game get to that point.

The deck begins with a pair of Vampire Lacerators, which are as good a card as you’re likely to find in your opening hand. With the ability to start swinging for 2 on turn 2, the fact that they damage you for half as much for awhile isn’t a concern- this deck is quite happy to trade out life to get stuck into its opponent. There’s also a pair of Pulse Trackers, a somewhat unusual one-drop from Worldwake. Though it quickly becomes outclassed on the battlefield, the ability to still get in a point of damage that even the stoutest blocker can do nothing about prolongs the Tracker’s shelf life.

Moving up to the two-drops, we find a pair of Ruthless Cullblades. These also tie in with the “opponent at 10 life or less” theme that Zendikar introduced, and go from slightly underwhelming 2/1’s into more formidable 4/2’s. Another 2/1 appears here in the form of the Child of Night. A 2/1 with lifelink, they can help recover some of the damage that the Lacerators do to your life total, as well as combo with the Sanguine Bond the deck carries in its supporting suite. You get a full playset here, underlining their importance to the deck’s aims. Finally, for some added reach you have a pair of Blood Seekers. Their feeble 1/1 body won’t win many battles, but they can get in a tidy packet of damage if played early enough without ever having to turn sideways.

For three-drops, we lead with a trio of Mindless Nulls. As explained by Mark Rosewater, the card’s overcosting was the result of a typo- it was originally supposed to be a two-drop- and R&D found it funny enough to keep the card as-is. Though Rosewater concedes that the card is “viable in Zendikar Limited,” here it’s essentially a Scathe Zombies, and likely the last three-drop you’ll want to see. Still, in a deck that packs Duels’ first mythic rare card, you have to expect some offset.

From there we find a trio of Vampire Aristocrats. A functional reprint of Nantuko Husk that saw print for the first (and last) time in Magic 2010, the Aristocrat’s sacrifice outlet can make it a must-block for any opponent low on life. Better still are the pair of Vampire Nighthawks. Recently reprinted in Magic 2013, these represent an incredible value with no additional difficulty to cast thanks to the all-Swamp manabase. Finally, a pair of Bloodrite Invokers from Rise of the Eldrazi round out the drop slot, giving you some added reach and a way to bring a stalled endgame to its inevitable conclusion with a hefty syphon of life.

With the gaggle of Vampires this tribally-themed deck hosts, a Vampire Nocturnus can be a game-winning drop, and it can come down as early as turn 4. Another card originally seeing print in Magic 2010, it, too, has made a comeback in Magic 2013. The card is an absolute beast, giving your creatures a substantial buff and flying around 60% of the time. Aside from the aforementioned Nulls, the only other non-Vampire creature present is a pair of Heartstabber Mosquitos, which use Zendikar’s returning kicker mechanic to offer you an extra dose of removal on a stick. A 2/2 flier isn’t a bad thing to have, either, even if the card is fairly pricey in either mode.

Finally, the top of the mana curve is capped off with the Butcher of Malakir. A Grave Pact baked onto a ferocious 5/4 beater, this is the deck’s biggest card and another must-answer threat. The downside is that it’s seven mana, which is no small ask, but if the game goes that long you’ll be glad to have some options. It also turns each of your creatures into a Diabolic Edict whenever you’ve landed a Vampire Aristocrat. Brutal.

Fittingly enough, most of the noncreature support suite of Master of Shadows is devoted to removal. A pair of Hideous Ends act as a Dark Banishing variant, offering the prospect of a dose of life loss in exchange for making the card more Black-dedicated. That’s perfect here in a mono-Black build. There’s also a pair of Disfigures, which are less versatile in terms of what they can eliminate when compared to the Ends, but are considerably cheaper. In addition, there are some less common situations where you might actually prefer the -2/-2, for instance when you’re up against a creature with regeneration. Finally, there’s a Feast of Blood. Although slower to cast and conditionally available, this will smite one creature outright, regardless of colour. The touch of lifegain isn’t bad, either. 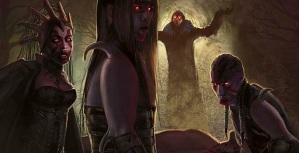 Final Revels– unusual in that it’s from Lorwyn- straddles the line between removal and buff, depending on the need. A -0/-2 debuff to your opponent’s creatures can act as a moderate sweeper, clearing the way for your ground troops. On the other hand, especially if you’ve managed to field a substantial air force, the +2/+0 mode can rock an opponent’s life total. Although it costs five mana, this one’s worth it.

The deck’s final cards are a collection of miscellaneous effects. A pair of Disentombs let you retrieve a fallen creature from your graveyard to hand- just the thing for getting that Nocturnus back for a second go. Rise of the Eldrazi’s Nighthaze is a very narrow cantrip, but at worst against a non-Swamp-playing opponent you can still cycle it for

. Finally, Sanguine Bond gives you another source of ranged damage, one that can be very difficult for certain decks to deal with. Thanks to your lifelinkers, Feast of Blood, and Invoker, you have ample opportunities to gain life and trigger the Bond. It’s a bit streaky, as its quality will depend on what you’ve managed to field, but it’s a classic card from Magic 2010 that’s not seen print since. Its inverse was printed in Avacyn Restored with Exquisite Blood, and taken together they form an infinite loop that will burn out your opponent the moment they take a single point of damage.

Overall this is a very aggressive deck, and the inclusion of a mythic rare card makes it even more notable. We’ll take it for a spin at the table and see how it does, then report back with a final grade.