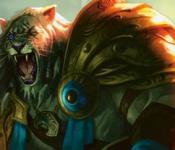 As we discussed in our last article, Ajani underwent a transformation from Ajani Goldmane to Ajani Vengeant when SHards of Alara came around. By a similar measure, I’m looking to transform Claws of Vengeance into a victorious deck, but I’m not without opposition. Standing in my way is Sam, with Chandra’s Breath of Fire.

Sam’s on the play for the first game, and she opens with a Raging Goblin to attack for the first point of damage. Next turn, she plays a second, swinging in for 2 more. Meanwhile, I’ve played a Mountain and a Plains.

Now turn 3, Sam presses with her unopposed Goblins, then summons a Flamewave Invoker. Playing a Forest, I’m then able to trot out the ferocious Grizzly Bears to put a stop to Sam’s attacks. It works for a moment, at least, until Sam simply Shocks it out of the way and attacks in for 4, dropping me to 11. Back to me, I play a Rip-Clan Crasher and pass.

Sam keeps the pressure on, sending in the Invoker to attack on turn 5. I accept the trade for my Crasher, and Sam replaces her loss with a Hill Giant. My hand forced, I kill it off with a Blaze. Next turn, Sam sends in her Raging Goblins for more damage, then adds a Goblin Sky Raider. Stuck on four land, I happily find a Rampant Growth and play it, grabbing another Forest. Knowing I can’t answer her evasive threat and wary of falling into burn range, I then Pacify the Sky Raider.

Now turn 7, Sam ambushes me with a Lightning Elemental, attacking in for 6. Now very vulnerable at 3 life, I play a Venerable Monk to claw my way back to 5. I then play another Rampant Growth for another Plains and end my turn. Back to Sam, she sends in the ground troops for lethal. I shove the poor Monk in front of the onrushing Elemental, but it comes to naught. Down to 3, Sam simply Incinerates me for the win.

I begin the rematch with Tundra Wolves and Grizzly Bears, and this time it’s Sam’s turn to have a slow start. By the end of turn 3, I have her down to 13 and the best she’s managed is a Raging Goblin, counterattacking for 1 to leave me at 19.

Now turn 4, I attack in for 3 more, pressing home my advantage. Sam Shocks the Tundra Wolves, which are an outsize nuisance for her particular deck. Down to 14, Sam counters with the Raging Goblin, then adds a Goblin Sky Raider. Next turn the Bears carve in for 2, then Sam matches with her Goblins to drop me to 16. Sam then one-ups me with a Hill Giant, and ends her turn.

I finally manage to grab a Mountain on turn 6 when I deploy a Farhaven Elf. With the tide turning, Sam attacks for 4 with the Giant and Raider to draw us level at 12. Concern turns to worry as she then follows on with an Earth Elemental. I solve the new addition with a Pacifism, using the chance to send in the Bears for another 2 points of damage. Next turn Sam throws everything at me, and I trade my Elf for her Goblin before Incinerating her Giant, taking the wind right out of her sails. In the end, I take only 1 point of damage from the Sky Raider.

Back to me on turn 8, I attack with my Bears, sending Sam down to 8 life. After that, I summon a Woolly Thoctar, a real game-changer of a card. Sam rather lamely sends the Raider gliding across for 1. Back to me, I Pacify the Sky Raider anyway, hammer Sam with the Thoctar and deliver the coup de gras with an Incinterate- turnabout is fair play!

Sam begins the decider with a Mountain, while I summon Tundra Wolves. Next turn she adds a Goblin Piker, underlining the defensive usefulness of the Wolves. I play a Rampant Growth, giving me one mana of each colour.

Now turn 3, Sam Incinerates the Wolves to allow her Piker to connect for damage. I answer with Grizzly Bears and a Knight of the Skyward Eye. Back to Sam, she baits a trade with the Piker by attacking, but I let it pass for the damage. She then adds a Flamewave Invoker. I attack with my pair of 2/2’s, pumping the Knight for more when Sam declines the block to hammer her for 7.

Sam fires right back on turn 5 as she attacks with her Goblins for 4, then adds another Piker. I summon a Rip-Clan Crasher, then send it in alongside the Bears- holding the Knight back since I don’t have the mana to pump him and won’t risk the trade. Sam swaps the Piker for the Crasher instead, cutting her incoming damage down to 2. I then fetch a Mountain with a Rampant Growth and pass the turn. Back to Sam, she keeps the attacking up with her Goblins for another 4 as we’re in a race, and I fall behind to 8. She then summons a Goblin Sky Raider before passing. I then send in the Knight of the Skyward Eye, pumping it to a 5/5 to cut Sam down to 6. A Venerable Monk then brings me back up to the safety of 10 life.

Now turn 7, Sam sends in the Sky Raider and Invoker for 3, then adds another Sky Raider. Now at 7, I play a Wild Swing, targeting her Invoker as well as her untapped creatures- the Piker and the latest Sky Raider. The random die roll spells doom for the Sky Raider, after which I attack in for 6 with all three of my creatures. Sam happily accepts the trade of my Knight for her Piker, since I now lack the mana to pump it. This puts Sam down to 2 life, and the last card in my hand is an Incinerate for the win. It was even closer than I thought, however, as Sam turns her hand over to reveal a Lava Axe to finish me next turn. Live by the burn, die by the burn!

As expected, the manabase was the shakiest part of the deck overall, and its fortunes rose and fell based on how effectively I was able to hit the trifecta- playing at least one of each land. Sometimes the effects were frustrating, but not game-ending, such as in Game Two when I had the Woolly Thoctar and two of the three colours in the opening drop, but couldn’t find a Mountain until turn 6’s Farhaven Elf. In that case, I was still able to work with what I had to advance my game state, comfortable at least in the deck’s chances of delivering one to me. In the first game, however, the results can be quite a bit worse. Although in part some of the damage was self-inflicted with a bit of a greedy keep (two Rampant Growths can do that), I had to devote so many resources to fending off Sam that that didn’t leave much room for manabase fixing. In times like that, you’re just ging to spend the game on the back-foot, and frequently lose (as I did).

Knight of the Skyward Eye

This gives Claws of Vengeance a subtle nuance in comparison with some of the more sturdy and reliable mono-coloured decks in the environment, introducing an added level of variance. Sometimes you’ll be scrabbling for one type of land, other times your opponent has to deal with a turn-3 Wooly Thoctar. C’est la guerre, non?

Overall this was a very fun deck to play, not least because of its solid ramping and removal. Unlike the suite we found in Teeth of the Predator, this is real ramp, Rampant Growths and Farhaven Elves that advance you a land rather than the mana-smoothing Civic Wayfinders. Once the deck got going, it was able to impose its will on the game thanks to the strong card selection, but of course the trick is getting off the starting blocks well enough to allow you to do so.

Hits: Solid support from ramping and removal helps give the deck a good chance of getting to its goal; outsize threats, while swingy, are very capable of stealing games if deployed early enough

Misses: Without a single Terramorphic Expanse (or equivalent), the deck is still at the mercy of its opening draw; deck can fall behind if it doesn’t manage to get all of its land into play early enough