Like any large community of people with a common interest but varied values, Magic is no stranger to controversy. Usually these are local issues, such as the reprint policy or card bannings- concerns that are only really relevant to the community itself. Other times, however, they plant their flag firmly within a larger societal context. One of the most visible of these is the issue of sexism in Magic, which one can be forgiven for thinking fluctuates somewhere between boil and simmer.

Earlier this year, a retailer and tournament organiser in Illinois, Pastimes, produced a promotional playmat for distribution at Grand Prix: Indianapolis. At the time, they probably thought this was a good idea. Gloating Goblin, fawning ladies… what could go wrong? Apparently, a lot.

In so doing, Pastimes displayed a rather poor read of the Magic community’s evolving awareness. To be fair, at the dawn of the game there was certainly much less of a standard set with regards to what Wizards was willing to endorse through its art selection. Cards like Earthbind and Fire Elemental are frequently held up as examples of the sort of depictions of women in Magic that would never see print in the modern game. Still, in the minds of many we still have some way to go. While one can take some encouragement that in the Pastimes affair, Wizards intervened and the offending artwork was scrapped, the occasional flap does come up when a piece of artwork is deemed to cross the line in some way. We saw this to some extent in Innistrad block with Liliana Vess, both in her planeswalker art as well as in her depiction on the highly-charged Triumph of Ferocity. It’s happened to other planeswalkers as well, perhaps surprisingly with the subject of today’s review, Nissa Revane.

When thinking of risque art, Nissa may not be amongst the first that comes to mind, but she did have her own lesser controversy- one that Wizards was on the other side of this time.

Nissa Revane is a third-generation planeswalker released in Zendikar, and the first-ever tribal planeswalker released. Each of her three activated abilities involves Elves. The builder ability lets you tutor up a Nissa’s Chosen (a reskinned Elvish Warrior), while a second builder lets you gain life in proportion to the number of Elves you have in play. Build her up enough, and she can go ultimate, dumping as many Elves as you like onto the battlefield from your library. Although potent in the right construction, that construction never held a great deal of acceptance in the Standard environment of her time, and thus Nissa rather came and went with little fanfare. This wasn’t quite the case outside of the game, however.

As one of the featured characters of Duels of the Planeswalkers, Nissa commaneded a great deal of promotional attention. Somewhat surprisingly, however, the Entertainment Software Rating Board kicked back the original Nissa artwork as inappropriate. Unlike the paper game, the digital version had to be submitted to the oversight body- though officially voluntary, console manufacturers generally won’t permit games to be carried on their platform without a rating. That made the choice easy. In commenting about the reversal when introducing Nissa, Doug Beyer noted that Wizards “felt it was in-bounds for fantasy art on a “T for Teen” product, but we’re not the ESRB, and that’s the way it goes sometimes.” 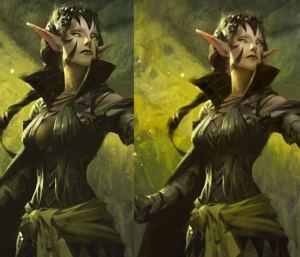 Nissa before and after, courtesy of Nyth at Wizards of the Gulf Coast

The subject of depiction of women in Magic is one that continues to divide the Magic community, but there are some articles out there that are more thought-provoking than ranting. For those wanting to a take a closer look at the issue, there are two in particular that we’d recommend: Wrong Way Go Back by Brendan Weiskotten, which looks at the Pastimes playmat controversy and its place in the history of Magic, and Ral Zarek and the Male Ideal by MJ Scott, which looks at artistic depiction in the Izzet guild. Both are long on thought and short on screed.

The deck is an interesting mix of early and midrange elements, with little in the way of your traditional closers. This isn’t your standard Green ramp-into-fat deck, but rather one that employs a tribal, swarm-based strategy. Indeed, Elves tend to corner this market much in the same way that Goblins do for Red.

It opens with a trio of Elvish Eulogists, 1/1 Elves that can be popped for a bit of lifegain. It’s important to note that absent some interfering card (like a Leyline of the Void), the lifegain triggers after the Eulogist has been sent to the graveyard, so she’ll almost always be good for at least 1 life. There’s an intriguing sense of scale here, with the idea that the worse the game is going for you, the more she’ll likely be worth.

Moving on to the two-drops, we find the historic Elvish Warrior, and a full playset of them to boot! A strong card for the mana cost when it first saw print in Onslaught, the Warrior is a bread-and-butter beater that offers one of the largest bodies in the deck- at a very early stage of the game. Strong on defense against early 2/2’s, and able to attack past them, the Warrior is one card you’ll get a lot of traction out of, even if it has no special abilities of its own.

Here we also have a pair of Elvish Visionaries, coming from Shards of Alara. These essentially offer you a 1/1 body on the battlefield without costing you a card. Like many Elves, they offer little threat on their own, but fortunately as we’ll soon see the deck has some options to make its Elves quite a it larger. The last two-drop on offer here is Gaea’s Herald, the deck’s first rare card. This 1/1 does carry a special ability that emboldens the rest of your Elvish army- he makes them uncounterable. This makes the card very narrow, for only your Blue opponents have reliable countermagic, and indeed there’s little upside if you’re playing against any other colour.

There aren’t a great deal of Elves in the deck that are tempting targets for countering, but the Elvish Champion is certainly one of them. A three-mana 2/2, she’s a “lord” in that she pumps up your other Elves with +1/+1 and forestwalk. Thanks to the stats boost, this makes her on of the deck’s MVP’s, and you’ll be happy to draw her at any point in the game. Also here is a full playset of Farhaven Elves. These aren’t the most useful in this deck, since the mana curve is fairly low, but it can help ensure you hit the top of the mana curve early. It’s worth pointing out that this is what mana ramping looks like in Duels of the Planeswalkers, as reader DomaDragoon recently pointed out (we’d missed this point in our assessment of Garruk’s Teeth of the Predator deck). Since the Duels of this era didn’t have a mana pool (instead tapping lands for you), this was as close as it could get. Sorry, Llanowar Elves!

Moving now to the four-drops, we find a few more offerings from Lowyn. First up is the Moonglove Winnower, the odd Elf that’s Black rather than Green (reflecting the sensibilities of Lorywn’s Elves). Like the  Elvish Warriorthese are 2/3’s, but the addition of deathtouch makes them potent on offense and defense. They’ll kill or trade with almost anything they run up against, and it will take a 3-power creature to take them down. Also here is one of the staple cards of many the Elvish deck, the Lys ALana Huntmaster. Somewhat surprisingly a common card, the Huntmaster can grow your army like no other creature can. It’s worth noting that there are a trio of tribal instants in the deck, so the effect isn’t just limited to when you play more Elves- those count too!

The deck’s final creatures is Elven Riders, and you have a pair. Originally a rare from Legends, the Riders were demoted to uncommon in every subsequent reprinting. That aside, they fill the closer’s role by having a reasonably-sized body with evasion. With the pump effects the deck carries, they can become very difficult for any opponent to deal with- and they won’t have long to find an answer.

The noncreature support suite of Ears of the Elves is pleasingly focused, mainly consisting combat tricks and removal. The combat tricks are a playset of Giant Growths– more or less the standard of what you’d expect. The deck does offer a surprise with a single copy of Coat of Arms. This long-loved gift to tribal decks everywhere from Exodus has seen a number of reprintings, and is one of the fastest ways to turn the corner from buildup to beatdown that the deck has available to it.

As for removal, this comes in three flavours. First is straight-up creature kill, here in the form of a trio of Eyeblight’s Endings. As tribal instants, these will generate a token off your Huntmaster, but even without they are a very effective kill spell you’ll always be glad to see. Also here is a trio of Essence Drains, which are a little more limited in scope in terms of killpower, but make up for that in two ways. First, they deal damage that can target your opponent. In addition, the life they drain out gets syphoned to your life total. Though five mana is no easy price to pay for this sorcery, its versatility makes it very useful. Finally, a pair of Naturalizes are present to mop up any threat that’s creature- or enchantment-based.

The last card of the deck is a one-card win condition in most any heavy Green deck it’s found within: Overrun. Like the Coat of Arms, this can turn your swarm into a lethal critical mass immediately.

That’s all we have today for Nissa and her Elves. We’ll return in two days with a final assessment after taking the Elves to war!