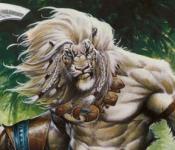 One doesn’t need to be a Magic player for long to recognise the truism that what you start out with isn’t always what you end up with. This is perpetually the case in R&D, where cards, themes, mechanics, and sets can go through all manner of changes before being cemented into the final form you see when you open a booster pack.

Part of this is due to the fact that the creative ‘layer’ that goes over a card to give it proper place in the world of Magic- not just flavour text and art, but even the name- isn’t brought in to the process until the later stages of development. This was recently discussed at some length in a recent Daily MTG podcast with guest Gavin Verhey (who you may recall was the subject of our recent Kaijudo Bull Rush review). In the podcast, co-host Trick Jarrett noted the disconnect between the early and finished product is perhaps most apparent Wizards presents a slideshow of the final designs for a set’s cards. “R&D’s first thing they look at, almost universally, is the flavour text. “That’s something they don’t get to see during their playtests… they don’t get to see that sort of stuff, so it was really interesting for me to realise that that was another aspect a lot of players overlook but that R&D… finds most interesting when they first get to see the final cards.”

Another change most every card undergoes is the name. Mark Rosewater has discussed how he sometimes can’t even recognise new cards from the name they ended up with, so accustomed is he to the name they have in playtesting. Indeed, when asked for an example of a card with a memorable design name in the aforementioned podcast, Verhey relates the story of the Return to Ravnica card Horncaller’s Chant. In design? “Uh-Oh Rhino.”

As the most complicated card type the game’s ever seen, it’s no surprise to learn that planeswalkers went through an extensive design and development process on their way to release. Indeed, although intended for release during Future Sight, the planeswalkers were not finalised by the time the set went to print, and they were pushed back to the next release, Lorwyn. Wizards knew they stood at the crossroads of a major game innovation, and had only one shot to ‘get it right.’

When they sat down to make the initial slate of planeswalkers, R&D drafted up a list of nineteen different principles they needed to consider when designing them, ranging from mechanics to general player appeal. Noted developer Devin Low,

With a totally new card type activating in unique ways, destroyed in unique ways, and covered in tweakable loyalty numbers, we had zero basis for comparison. Each of the five planeswalkers changed its abilities multiple times, and the ones we released bear little resemblance to the first versions designed. 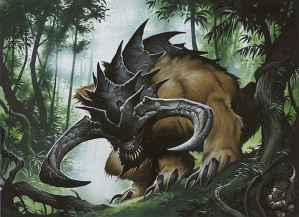 This is perhaps truest of all for today’s planeswalker, Ajani Goldmane. The first planeswalker to have their home plane visited in Shards of Alara, Ajani ironically wasn’t on the initial slate of five. Instead, the planeswalker that would eventually become Ajani was known as Theseus the White. To give a sense of the gulf in development from start to finish, it’s worth taking a moment to consider poor, doomed Theseus.

Theseus entered play with a whopping nine loyalty counters, giving you a clue right away of how much planeswalkers developed over time. Indeed, he also had no way to gain them, no “builder” as it’s commonly called. Instead, Theseus had three abilities (the general standard) which either cost nothing or reduced his loyalty. The first effect, costing no loyalty, was a sort of Kismet effect that impacted all permanents your opponent might play. The second effect, costing 2 loyalty, tapped a creature, then prevented tapped creatures from untapping during their controller’s next untap step. The final ability, his “ultimate,” cost only four loyalty, and was the sort of conditional Wrath of God effect we’ve seen on other White cards like Sunblast Angel, Righteous Fury, and Guan Yu’s 1,000-Li March where only tapped creatures perish.

Within three weeks of conception and after exhaustive testing, R&D razed loyalty across the board by about half, the first signs that they were beginning to become attuned to the proper place of the planeswalker in the role of the game. Soon Theseus exited stage left, and a new planeswalker- a leonin named Ajani- took his place (those interested in a much more detailed account of Theseus/Ajani’s development can find it here). Like the other planeswalkers, Ajani’s backstory was initially a bit vague, but it was clear that Wizards had some idea of where it was going. In an unusually clumsy piece, creative mind Doug Beyer set up the tension in Ajani’s home tribe by casting Ajani as an “oddball” and “weirdo.” Beyer would certainly redeem himself with the novel Alara Unbroken, which fleshed out the outcast character and dispensed with any goofy attributions.

Ajani’s journey as described in the book is one of transformation and exile, taking a few cues from the Hero’s Journey of Joseph Campbell. As he searches to uncover the killer of his brother, Jazal, Ajani Goldmane becomes Ajani Vengeant, the burning need for justice transforming itself into a connection with the Red mana of his native shard of Naya. It’s this incarnation- rather than the previous mono-White one- which gives us today’s deck, Claws of Vengeance.

Claws of Vengeance already starts a bit behind the ball in the rather straightforward Duels of the Planeswalkers environment, given the fact that it is a three-colour deck in a monochromatic world. With most of the other decks being of a single colour, you’d hope to find a fair bit of mana fixing contained within, but alas all of the lands in the deck are of the basic sort. Although in theory the deck can rely on the strengths of all three of its component colours, in reality that means that the deck will have a struggle to be able to play what it needs consistently much of the time.

One answer to this, of course, is to frontload the mana curve. With almost everything in the deck’s creature suite costing three mana or less, the deck is able to offset the somewhat cumbersome nature of the deck’s manabase with a collection of creatures that have the ability to threaten early. Even if the deck misses a step, it isn’t dead in the water, and can look to buy time to bring one of its mana-fixers online.

The deck opens with a full playset of Tundra Wolves. Originally from Legends, the Wolves make up for their smaller size with first strike, which can impede an aggressive-minded opponent who tries to overwhelm you early with smaller creatures. That said, there’s little in the deck in the way of power pumping, so what you see here is about what you can expect to get. That makes the Wolves a fine early draw, but something of a liability later on when you’d much prefer a number of other cards over them.

In the two-drop slot, we find a trio of easy-to-cast Grizzly Bears. With half of your land consisting of Forests, these are an easy way to establish a presence on the board, even if they don’t do all that much outwith being a body. Should you be fortunate to find an early Mountain- your least populous land type- you then have the option of the Rip-Clan Crasher. These pack the same punch as the Bears, but can ambush your opponent thanks to haste. Also from Shards of Alara is a single copy of the Knight of the Skyward Eye. Another “Bear” (slang for a 2/2 body), the Knight also serves as a very serviceable mana sink in the midgame when you might be looking for ways to put your land to good purpose. This turns the Knight into a very relevant 5/5, even if it costs a tidy sum to do so. If your opponent doesn’t have a way to deal with them, the price of admission is well worth it.

Moving on to the three-drops, we find some mana fixing in the form of a pair of Farhaven Elves. Although their 1/1 body is another underwhelming option, they are superb for getting your mana situation on track. Should you manage to ‘hit the trifecta’ of one of each type of land, the rewards can be quite generous- the deck also boasts a pair of Woolly Thoctars. These massive, 5/4 bodies are superb inclusions for the deck. Although not easy to play thanks to their very rigid colour requirements, those times that you’re able to play one on turn 3 can spell the end for a slower or struggling foe. Unlike the Tundra Wolves, these are always relevant, and you’ll seldom be disappointed to see one from the draw.

Acting as a hedge against some of the earlier beating you might sustain as you assemble your three-colour land array is a trio of Venerable Monks. Each of these brings along a small dollop of incidental lifegain, leaving behind a 2/2 body. Dedicated lifegain outside of a supporting strategy is usually a waste of a card slot, given the conditional nature of the strategy, but in combining the two effects (the lifegain and a creature), the Monk strikes a fair balance.

Finally, every deck needs a good closing option, and a pair of Bull Cerodons serve that need here. These combine the best aspects of both the Rip-Clan Crasher and Woolly Thoctar, and can even attack and defend on the same turn thanks to their vigilance. Haste is a great ability for catching your opponent with their guard down, and having it attached to a 5-power body represents a serious threat.

Unlike some of the other Duels of the Planeswalker decks, there is very little wasted space here in Claws of Vengeance, and each suite of cards addresses a specific need. For ramping and mana-fixing, there is a full playset of Rampant Growths. Cheap and simple, it does exactly what the deck needs in the two-drop slot, helping to get you the land you need early one.

The removal suite is particularly robust. A playset of Pacifisms help sculpt the battlefield to your advantage by removing an opponent’s creature from combat consideration. If they happen to be threatening you with an artifact or enchantment, you’ve got a pair of Naturalizes to address the matter. Finally, a single copy of Wild Swing, a sorcery from Shadowmoor, gives you the ability to handle almost anything thrown at you. Of course, the downside is that you might not end up killing the card you most need dealt with, but this sort of random element offers a bit of fun and unpredictability without being a complete bust like some of the more nettlesome coin-flip cards.

In addition to straight-out removal, you have a small burn package as well. Consisting of a pair of Incinerates for the smaller targets, and Blazes for the larger, this also gives you some added reach across the table. In tandem with the removal suite, this is a deck that has no shortage of answers to problems posed on the battlefield. Finally, as a one-off joker in the deck, there’s a single copy of Sangrite Surge. A sorcery from Shards of Alara, this lacks the element of surprise but still can help one of your creatures hit with the force of a truck.

Thats it for our friend Ajani and his Claws of Vengeance today. We’ll be back in two days to report on the deck under playtest conditions, and offer a final grade. See you then!