With more behind us than ahead, we’re eager to savour every bit of Dark Ascension that we can. For today’s bout, we’ll be putting Grave Power through its paces. A deck with considerable potential, how will it do when required to perform? To test that out, I’ve enlisted Sam who’s selected Relentless Dead to pilot. Here we go!

Sam has the honour of leading off the opening game after mulling to 6 cards, and we both spend our first turn playing land. Next turn she summons a Walking Corpse, while I answer with a Dawntreader Elk. Sam then follows with a Diregraf Captain, swinging for 3 with her newly-buffed Corpse. Back to me, I also land a key card for my deck, the Armored Skaab. I get a bit of luck, milling off two creatures, a Gnaw to the Bone, and a land.

Now turn 4, Sam hangs back and spends her turn bulking up her troops. First she adds a Black Cat, then follows with another Walking Corpse. I’m not worried, though, as I drop a second Armored Skaab to thicken up the red zone. Not so lucky this time, I only mill off one creature. Back to Sam, she swings for 8 with her Corpses and Cat. I block the former with my Skaab wall, taking 2 from the Cat. She then adds a Cellar Door and passes, though at the end of her turn I pop the Elk for an Island. With five creatures in my ‘yard, I then bring out the Splinterfright. If the appearance of a 5/5 creature wasn’t bad enough, I go ahead and double down by enchanting it with Wreath of Geists. Sam’s suddenly facing an 8/8 trampler, and doesn’t have a lot she can do about it.

With few attractive options, Sam resigns herself to trying out the Cellar Door on turn 6. It doesn’t net her a creature, but the Reap the Seagraf it reveals is almost as good- or at least it would be with one more land. Back to me, I mill two thanks to the Splinterfright, then let Sam behold the face of her doom with a Chasm Drake. Back to Sam, she whiffs again on the Cellar Door. Once it’s my turn, I mill another two cards (land), then follow with a Tracker’s Instincts. That hits, pitching a Brindle Boar into the graveyard, so my Splinterfright is now a 12/12. For good measure, I flash it back and am rewarded with another creature, making the Splinterfright even bigger. In goes the Drake, carrying the Splinterfright over with it, and just like that Sam’s down to 5 from 20.

Naturally, she scoops the next turn after drawing nothing. For curiosity’s sake, I do a quick check of my graveyard and find I have some 20 cards in it. Beautiful!

A better star for Sam sees her open with a Diregraf Ghoul, which she follows with a Screeching Skaab and 2-point attack. I follow with a Deranged Assistant, and we’re both off to a solid enough start.

Still, Sam’s ahead in the creature race, and she swings for another 4 on turn 3 to put me to 14. I miss my turn-3 land drop, but am grateful for the Assistant as it lets me bring out an Armored Skaab and see off my first two creatures into the graveyard from the mill. At the end of my turn, Sam casts Forbidden Alchemy to help set up her next. Back to her, she adds the Diregraf Captain, attacking for 6 with her Zombies. I block one with my Skaab, going down to 11 from the Ghoul. For my part, I trigger the Assistant to play a second Armored Skaab, and now find myself with four creatures in my graveyard. 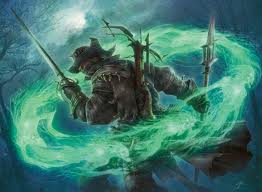 Now turn 5, Sam swings for another 6. I block both with my Skaabs, then Sam brings down a Farbog Boneflinger. She tanks for a moment, deliberating which creature to kill, and opts to pick off my Deranged Assistant. With me stuck on three land, it’s not a bad idea, though it does add another body to the compost heap. Still, the momentum is all hers. Over to me, I luck out and topdeck a Forest, letting me trot out a Moon Heron. Next turn Sam attacks for 9, and I’m again grateful for my Skaabs. Still, one Zombie gets in to gnaw on me for 3, and I’m now at 11 life. She adds an Abattoir Ghoul and ends her turn. I get my first attack of the game off with the Heron, then play a 5/5 Boneyard Wurm. As before, I then follow with a Wreath of Geists to make it a 10/10, again turning the game around on a dime. Not quite finished, I end with a Tracker’s Instincts and pull a Chasm Drake. No bonus points awarded for seeing where this one is going.

Sam hangs back on turn 7, summoning a Headless Skaab by exiling a Rotting Fensnake that’s found its way into her yard. I attack for 3 more with the Bird, then bring out the Drake. Back to Sam, she plays a Cellar Door, but the cause is lost. She can’t do anything to stop me in the sky, so I swing for lethal in the air withe the Drake/Wurm tandem finishing the job alongside the Heron.

Hoping to avoid the sweep, Sam again begins well with a Diregraf Ghoul. Next turn she attacks for 2 before adding a Black Cat, and the turn following she’s swinging for 3, finishing with a Screeching Skaab. Down to 15 life, I shore up my defense with an Armored Skaab, milling off three land and an aura- a whiff.

Now turn 4, Sam attacks for another 5 damage. I make a silly misplay here and use the Skaab to block her Ghoul rather than her own Skaab (which would kill it), presumably trained to think of them as having +1/+1 even without the Captain in play. She follows with a Reap the Seagraf and ends her turn. Back to me, I bring out a Tower Geist. My top two cards are an Æther Adept and a Grim Flowering, and painful as it is I pitch the creature to the graveyard. Back to Sam, she now goes all in for 7, swinging with everything. I trade my Geist for her 2/2 Zombie token off the Seagraf, wanting to feed my own graveyard without helping her fill hers. I catch myself this time and kill the Screeching Skaab with my Armored model, and go down to 9 life. Back to me, I then bulk up my forces with a Brindle Boar and 2/2 Boneyard Wurm.

Sam swings on turn 6 with her Ghoul and Cat, as if daring me to kill the latter. I block the Cat with my Skaab to kill it, then push the Wurm in front of her Ghoul. Popping the Boar, I go up to 13 life and make my Wurm a 3/3 to kill the Ghoul, too, a seeming miscalculation on Sam’s part. The random discard from the Cat pulls a Grim Flowering from my hand- no great loss- and Sam follows up by flashing back the Reap the Seagraf. Once my turn opens up, I play another Tower Geist (keeping a Splinterfright), and go in on my first attack with the 3/3 Wurm.

A turn-7 Headless Skaab gives Sam a defender, tapped though it may be at present. I push the Wurm and Geist into the red zone to take advantage of Sam’s vulnerability, and she drops to 12 life. Although I’d have optimally cast it before my attack, I follow up with Tracker’s Instincts and hit paydirt. Two creatures head to my graveyard (bringing the total up to 5), and I rip the Ghoultree. I opt to deploy the Splinterfright first, and then pass turn. Back to Sam, she plays a Forbidden Alchemy and laughs- she’d later tell me she drew four land from it and kept an Island. Trying to stall for time, she puts a Dead Weight on the Splinterfright and passes. For my part, the Splinterfright mills a pair of land off the top of my library to start off my turn, then I attack with the Geist for 2 and bring out the Ghoultree and an Executioner’s Hood.

Now turn 9, Sam knows the jig is up when the best thing she can play is a Cellar Door. At 10 life and without an answer for the Ghoultree (who will be unblockable once I equip the Hood to it), Sam scoops to complete the sweep.

Although we try and avoid hyperbole when assessing the decks, it would be unfair to credit Grave Power with anything less than recognition for being one of the best Intro Pack decks we’ve ever seen- and certainly near the top of the Theme Decks as well. This is the rarest of precons- one that treats each card slot as something not to be squandered, has a cohesive theme and the strategy to get there, and throws its full weight behind it to support it. And it does it all through the use of two colours that generally don’t work very well together, Green and Blue.

To be fair to Sam, Grave Power has a solid advantage over ground-based creature decks, given its ability to stall the board quite effectively with its Armored Skaabs. Still, it not only accomplished that objective, but consistently was able to end the game quite quickly when one of its graveyard-linked beaters (Boneyard Wurm, Splinterfright, Ghoultree) was deployed. Early opinions on the Ghoultree tended to be dismissive on a power basis (though it was exciting as flavour), but the card is no joke. Unless you’re facing graveyard hate, you shouldn’t have much difficulty landing it for a bargain cost. Not only that, but the deck was effective at delivering damage. It only took about a half-dozen swings across three games to bring the Zombies to their rotting knees.

Although some cards aren’t as strong as others (Grim Flowering springs immediately to mind), there’s a surprising lack of filler here compared to many Intro Packs. The graveyard minigame really helps break up the monotony of combat as well. Pound for pound, Grave Power delivers.

Hits: Top-notch tactical support for the deck’s twin strategies of filling and abusing the graveyard; both of the deck’s rares are very solid and- in this context- generally quite affordable; superb consistency; high level of fun with the graveyard-fill objective taking the focus off of just turn after turn of combat; air force gives the deck a baseline win condition should the heavy beaters not materialise

Misses: A few suboptimal cards included like Grim Flowering and Æther Adept (the Adept is solid, but a bit out of place here); deck highly reliant upon the graveyard, and anything that could empty the ‘yard can steal victory from this deck