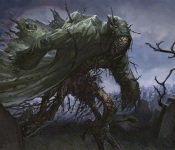 Good evening, folks! Just a few small notes for today as we enter the home stretch for Dark Ascension with our opening review of Dark Sacrifice.

Coast to Coast in Canada

Some of you may know the name Chris Lansdell, others may not. If you fall into the latter case, he’s one of more notable contributors to the Magic online community. A frequent voice on Twitter (@lansdellicious), he frequently appears on podcasts ranging from Monday Night Magic to The Eh? Team, and hosts his own with the Horde of Notions. He also is a writer for Canada’s premier Magic website, ManaDeprived, as well as a Level 2 Judge.

Chris has a problem. He’s trying to get to Grand Prix Vancouver, which takes place this coming June, and is holding a raffle to help fundraise for his trip. If his impressive list of contributions to the Magic community aren’t enough to sway you to contribute, perhaps the substantial prize list might! A single ticket is only $5, and Ertai’s Lament has thrown an Intro Pack and some boosters into the hunt as well. Head on over if interested, and let’s see if we can’t get him from one side of Canada to the other!

You might recall we recently held a contest over on GatheringMagic.com in my Meddling of the Relentless Dead Intro Pack deck. Congratulations to Preston Hamill, the lucky winner of a Relentless Dead Intro Pack along with all the extra cards we added to the final decklist. Sorry to those who entered but didn’t win, but not to worry- there are certainly more giveaways to come!

Seen About the Web

A couple of precon-themed articles caught our eye this last week or so. Fedger’s Furnace is a blog which posted the results of a duel between Innistrad’s Eldritch Onslaught and Deathly Dominion. In his next piece, he’s coming back with a Meddling to make Deathly Dominion even stronger.

Moving on, one of my favourite voices over at Gathering Magic is surely John Corpora. He’s on a quest to complete 52 FNM’s in 52 weeks, and while he did break his streak, hearing stores of his attempts to crack Standard each week is a riot. This last time he went armed with an unmodified copy of Deathfed, the Innistrad Event Deck. Here’s how it worked out for him.

That’s all for now!