2010-11 Precon Championships: Round 5 and the Leaderboard 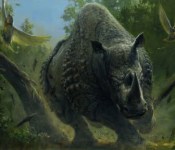 With the Tinsman Division having been settled last weekend, we’re about halfway done as we turn our attention next to the Forsythe. As before, we’ll return to the Rosewater Conference clash for our final Precon Playoff piece when the Champion is crowned. In a result that came as something of a surprise for many, Mirrodin Besieged’s Doom Inevitable managed to outlast its opponents and proliferate its way to victory. In doing so, it defeated New Phyrexia’s Feast of Flesh, which itself had triumphed in the opening round against an Archenemy deck and looked to be a strong contender.

Certainly our predictors had by and large expected a different result. The successful prediction rate this time was only 35%. To be fair, the weeks where a Division are divided have something of a curveball built into them. In most matches, both contestants are known. However, to get all three points a predictor must not only guess the outcomes of both lead-up matches, but then must choose which one they think will take it all. Pick wrong in the first two matches, and unless you hedge your own bets by choosing a third deck, you’re walking away empty-handed.

Still, three of our guessers snapped up all three points this week. Congratulations go to errtu, Michael Zhang, and Joshua for their solid performance! As you can see, this was especially critical for errtu, who is trailing the frontrunner by a single point. That frontrunner- Icehawk- still did well in picking two our of three matches, which was enough to keep him at the top. As in weeks past, his lead is by the slimmest of margins, and he’ll have to continue to keep a tight margin of error if he wants to end the Championships having won our giveaway!

As for the giveaway, for those new to the contest our top guesser will be claiming a prize package consisting of Intro Packs from both Magic 2012 and Innistrad. With the race half-run, it’s probably too late for any new readers to have a realistic shot at winning, but this format has proven so successful that we’ll likely look to repeat it for our next edition of the Precon Playoff next year. Feel free to jump in anyway and get your feet wet!

Now for the leaderboard, and this weekend’s matches in the Turian Division!

And here are the upcoming matches this Sunday. For your predictions, simply leave your calls for winner of each of the four in the comments below. As always, best of luck to everyone playing! 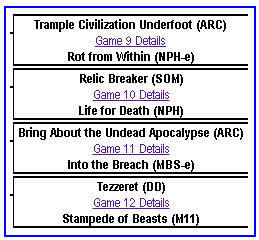