In the Conclave, individuality is an anathema.

That’s not to say that you, as an individual, don’t matter. It’s better to say that while you, the individual, are critical to the aims of the Selesnya, you as an individual must by necessity be sublimated to the needs of the whole. Look at the selfish- their lives are zero-sum. They advance themselves at the expense of others, getting ahead by leaving someone else behind. Such waste! Is it not better to group together, so that all may benefit as one? This is the way of the Selesnya Conclave, the way of fulfillment of the one through the fulfillment of the all.

Selesnya United takes this notion and translates it into a deck of sixty cards. Like each guild in Ravnica, the Selesnya have their own defining mechanic, and theirs is one which captures the essence of the many working towards the aims of the whole.

To get the most out of this ability, of course, you need quite simply to have a lot of creatures! Naturally, Selesnya United not only offers up a sizable proportion of creatures, but an abundance of ways to generate that mainstay of the Green token, the Saproling. By marrying a number of its effects to Saproling generation on the one hand, then giving you large, splashy spells with high pricetags that can be convoked out much more quickly, the deck employs a tempo-based strategy not unlike a Green stompy-ramp deck. When your opponent is dropping a turn 3 3/3, and you respond with a 5/5 trampler, it’s a race you’re quite likely to win. 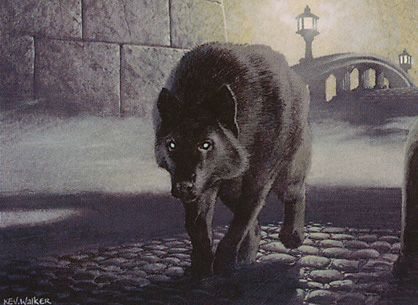 Together Sing a Harmony

To reflect the feel of the Selesnya, the deck is filled with creatures and affects that either create them, depend upon them, or use them up. It’s important to remember that this isn’t done in a predatory way- any sacrifice of an individual in the Conclave is done out of a duty for the whole. To begin with, let’s look at the deck’s creature curve:

The top of the curve has a very intimidating nine top-of-curve cards, and it only gets worse when we add in the noncreature spells:

In that light, the deck has its challenges cut out for it. Remember that while convoke is a mechanic designed to reduce the cost of many of your spells, you’re as often as not going to find unplayable cards in your hand on the opening draw. Selesnya United will essentially be self-mulliganing with most draws, so the trick is going to be to churn out as many creatures as possible to help power out those expensive cards. Rather than examine its creatures in order of casting cost, let’s instead turn to the roles the deck has for its cards.

Builders: These are the cards which help you generate your Saproling army, the 1/1 token creatures which will be the basis for much of what you’re trying to accomplish. Whether acting as joyous, happily self-sacrificial fodder for the Conclave’s needs, or serving as frontline footsoldiers of the weakest sort, there are a number of roles they can play. The Selesnya Evangel excels at this, letting you churn them into creation at the rate of one per turn for a small mana investment. In addition to the two of these, you also have a Selesnya Guildmage. Making Saprolings through the Guildmage is a pricier affair, but the upside is that you’re only limited by the amount of mana you have at your disposal. The Guildmage also can offer a pump effect that buffs your entire army- just the thing for a game-ending alpha strike with your swarm of creatures.

In the noncreature department, we have a full playset of Fists of Ironwood. Not only to these auras grant one of your creatures trample, but they bring along a pair of Saprolings each. We also see our first convoke card appear here in a pair of Scatter the Seeds. This is a pure Saproling generator- it does nothing more than put a trio of them into play. Despite its high cost (five mana), the convoke ability can help dramatically reduce the cost. Furthermore, it’s an instant, so that gets around one of the less-pleasant aspects of convoke, which is leaving yourself defenseless or vulnerable to attack. Lastly you have a reusable generator in Vitu-Ghazi, the City-Tree (though you’re essentially paying five mana per Saproling, making this more suited to a late-game mana sink).

Users: These are creatures that care about what you have in play, and the more the merrier! A prime example of this is one of your deck’s two rares, Scion of the Wild. Cast by himself, he’s simply a 1/1 for three mana- a terrible deal. But it doesn’t take much to have him go to a reasonable offer into a full-out steal if you manage to have enough creatures on the board once he lands. Then you have the Sandsower and Nullmage Shepherd. Each of these creatures grants you a special ability at the cost of tapping untapped creatures, a pill much easier to swallow when you have a large pool of them at your disposal. The Shepherd offers reusable removal against artifacts and enchantments, while the Sandsower acts as a tapper. The latter in particular can help set up game-winning attacks if you tap down a few of your opponent’s best defenders at the end of their turn, untap and swing in for the win! The deck gives you a pair of each.

You also get two each of the Elvish Skysweeper and Caregiver, creatures which go one step further and actually demand  self-sacrifice for the good of the Collective. The Skysweepers shore up one of Green’s traditional vulnerabilities- flying creatures. The Caregivers can trade creatures and White mana into damage prevention. It’s too expensive to be consistently useful, but it can be used to save the life of one of your better bodies on the table, or keep you in the game a little longer if things are going pear-shaped. 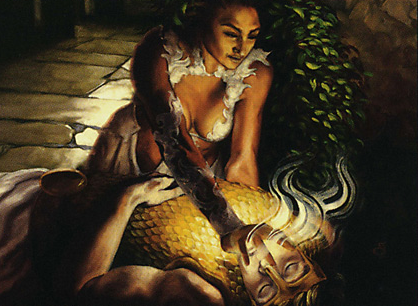 The Shields of the Conclave

Everything else goes in the Beaters category, and as you might expect there are some very strong options here to act as closers. The 3/3 Watchwolf makes for a very strong turn-2 play when the mana is cooperating. The aggressively-asymmetrical Centaur Safeguards give you a life bump when they perish, while the Dowsing Shaman lets you fetch an enchantment from graveyard to hand. With five auras in the deck, the Shaman should not only let you cast them with confidence, but can even help you set up a small recursion engine. Cast Fists of Ironwood on a Saproling token, get two more Saproling tokens, kill off the enchanted Saproling (via the Skysweeper, the Caregiver, or just sending it in against your opponent), then retrieve Fists of Ironwood with the Shaman and recast it for two more Saprolings!

From there you have some additional convoke creatures which can drop much earlier than your opponent might be expecting. A pair of Conclave Phalanxes give you a robust defensive-minded body along with a potentially substantial life bump. The Root-Kin Ally is a 3/3 body which can get pumped by tapping untapped creatures. This often can make the Ally a must-block for your opponent, lest they let it through and you tap out your side to make it hideously strong. You also get a trio of the deck’s strongest beater, the Siege Wurm. A simple 5/5 trampler, the Wurm will often be another must-answer card.

Finally, we have the decks legendary rare, Tolsimir Wolfblood. A robust 3/4 on his own, Tolsimir carries with him two powerful effects. First, he acts as a buffer for all of your creatures- and White/Green creatures like your Watchwolf get the benefit of both bumps. Second, he can tap to summon Voja, a 2/2 Wolf creature token (which immediately becomes a 4/4 thanks to Tolsimir’s buffs). Although Voja is legendary (and thus can’t be stockpiled), getting a free 4/4 every turn gives the deck a number of options, including relentless attacking and free fodder to sac outlets like the Elvish Skysweeper.

The Rhythm of Thundering Hordes

The remaining cards of Selesnya United are all noncreature support cards. Pump effects like Gather Courage are de rigeur for a Green-based creature deck, and with convoke you can even get one off when your mana is tapped out. There’s also an Overrun variant with Overwhelm, which costs more and doesn’t offer trample, but is offset by convoke. Conclave’s Blessing is a one-of aura that gives its target creature a potentially massive dose of toughness, while Dryad’s Caress is instant-speed lifegain with the appealing prospect of untapping all of your creatures. This not only can set up a surprise defense against an unwary opponent, but also can help give you a massive dose of virtual mana. Tap out all of your creatures to help power out some convoke cards, then use the Caress to reset your creatures and do it again!

That’s all the time we have today for our friends in the Conclave. Our next column will be the last of our visit to Ravnica, though you can be certain that we’ll be revisiting the plane in the future for a look at Guildpact. Join us in two days’ time when we put Selesnya United to the test.