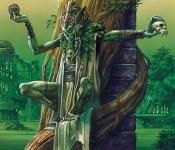 Approaching the end of our reviews of Ravnica and readying for Duel Decks: Ajani vs Nicol Bolas, we’re still finding the Ravnica set full of surprises. The designers did a very impressive job giving each guild its own unique feel, and translating the theme decks into showpieces for each guild is a perfect match. Not for nothing this is one of the most fondly-remembered sets. For today I’ve secured Sam as my sparring partner, and she’s chosen Selesnya United to serve in opposition.

Here are our notes from the customary three games.

I’m on the play, and I begin with a turn 3 Stinkweed Imp after two turns of impotence. Sam, meanwhile, has deployed a Caregiver and Selesnya Guildmage, already attacking in for some early damage. Naturally, the Imp puts a stop to that, though Sam’s turn-3 play- an Elvish Skysweeper– tells the Imp its days are numbered.

Now turn 4, I play a Greater Mossdog while Sam adds a Nullmage Shepherd. Back to me, I Darkblast her Skysweeper, while Sam convokes with her Caregiver to power out a Siege Wurm. I then add a turn-6 Woodwraith Strangler, and Sam uses the Guildmage to add a 1/1 Saproing token to the battlefield. The Imp is doing impeccably, holding Sam’s forces at bay, but with her building up it’s only a matter of time before she convokes out something truly disgusting. This time it’s a Conclave Phalanx, shooting her up to 26 life.

So far there’s been little interplay. Sam’s happy to build up her creature swarm, while I see my buildup as a defensive wall while I wait for my dredge engine to begin. Earlier games against Golgari Deathcreep showed me that if you kick off the dredging too soon, you can easily overlook manabase development and fall painfully behind your opponent. I play a turn-7 Drooling Groodion and pass. Over to Sam, she finally triggers a probing attack and swings with the Wurm. I block with the Imp, making a trade, but the Wurm’s trample damage spills over to hit me for 4. Still, this lets me kick off the dredging in earnest, and I reclaim the Imp and play it. I follow up with an Infectious Host and pass. Sam adds a Centaur Safeguard.

It’s now turn 9 and with my defenses in place I’m eager to fill my graveyard, so I dredge back the Darkblast. I then play a Golgari Guildmage, while Sam uses her own to make a 1/1 Saproling token at the end of my turn. Back to her, she attacks in with the Centaur and I take the trade for the Infectious Host. The clash of abilities nets Sam only 1 life, putting her at 27. She replaces it with another Centaur. Next turn I sacrifice the Woodwraith to the Groodion to kill off her Guildmage. She has the mana to use it to pump to save itself, so I finish it off with the Darkblast to take care of her token-making threat. For her part, Sam sends in the next Centaur, and I trade for the Imp.

I dredge the all-star Imp back on turn 11, delighted to see the Golgari Grave-Troll fall into the graveyard, and then recast it. Sam plays another Caregiver, then adds a Fists of Ironwood to her Nullmage Shepherd. Next turn I dredge the Grave-Troll and cast it, with it touching down as a beautiful 9/9- just the thing I need to break through the stall. Sam’s turn is a blank and she passes, awaiting the inevitable.

The Grave-Troll thunders across the red zone for the first time on turn 13, and Sam chumps it with a hapless 1/1 Saproling. We repeat the same process for turn 14. At the end of my turn she replaces it with three more thanks to a Scatter the Seeds, but has no real play of her own. I continue to press in with the Grave-Troll, determined to wear down Sam’s hefty token army.

Over the next few turns, Sam and I both race to get more creatures onto the battlefield. For Sam, it’s holding the line while she looks for an answer to the Grave-Troll. For me, I’m looking for expendable bodies to offer up to the Groodin so I can deplete Sam’s tokens faster than she can replace them. On turn 18, Sam marshals everything she has for a massive strike behind an Overwhelm, taking a massive chunk of life out of my side. Down to 7 life, I’m undeterred, using Putrefy and the Groodin to continue whittling down her chumps. Finally, the Selesnyans run out of creatures- on turn twenty-two.

The Grave-Troll makes quick work of her after that. 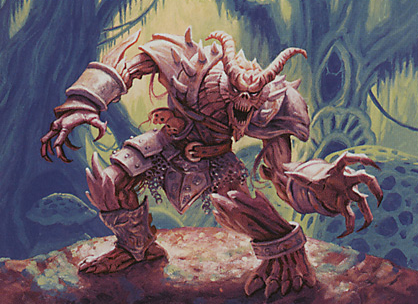 Sam leads off with a Caregiver followed by a Watchwolf, while my first creature is a Golgari Guildmage. Come turn 3, Sam enchants the Watchwolf with a Fists of Ironwood, giving her a pair of 1/1 Saprolings and taking me to 16 life. Meanwhile, I deploy the trusty Stinkweed Imp to give Sam second thoughts about attacking.

Now turn 4, Sam lands an Elvish Skysweeper while I play a Greater Mossdog. Again the Imp proves its worth, keeping Sam’s forces in their trench, afraid to come out. She adds a turn-5 Centaur Safeguard. My turn is a blank.

Now turn 6, Sam attacks in with the Centaur and Caregiver. I use the Guildmage to put a +1/+1 counter on the Mossdog, then block the Centaur. Sam goes up to 23 life, I go down to 15. I then send the Mossdog in to chew on Sam for 4. Next turn Sam uses the Skysweeper to kill of my Imp, offering up a Saproling to do so. This lets her swing in with the Watchwolf, convoking a pair of Gather Courages to hit for 7. Now down to 8, I dredge the Imp back and replay it, attacking for 5 with the Mossdog (I added another counter at the end of Sam’s turn). She’s now at 14 life.

On turn 8, Sam again uses her Skysweeper to kill my Imp, sacrificing her Caregiver. She attacks in for 3 and I take it. I dredge the Imp, turning over a Putrefy. I cast Recollect to return it to hand, then attack for 5 of my own. Next turn Sam attacks for 3 with the ‘Wolf, but I kill it with Putrefy. I enchant my Guildmage with a Moldervine Cloak and attack with both beaters. Sam is forced to chump her Skysweeper to stay alive. I recast the Imp. Back to Sam, she draws nothing and concedes. 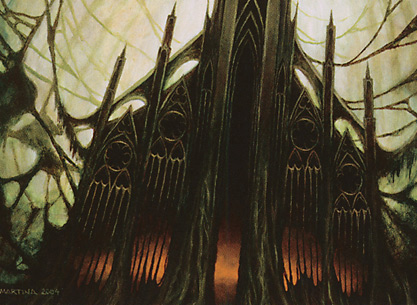 Sam and I trade land drops for the first two turns before she sticks a turn-3 Centaur Safeguard. Over to me, she can only sigh as I lay down the Skinkweed Imp. Sam’s turn-4 attack sees me trade the Imp for her Centaur, putting her at 23 life and kicking off my dredge engine. She follows up with a Selesnya Guildmage and passes. Over to me, I dredge my Imp back and recast it after playing Svogthos, the Restless Tomb.

Now turn 5, Sam finds a new threat- a Sandsower. I reply with a Greater Mossdog, but am anxious to solve the Sandsower as it can tap down my Imp. Next turn, Sam’s turn is a blank. After attacking with the Mossdog for 3, I Recollect a Putrefy that wound up in my graveyard. I then play a Thoughtpicker Witch and pass, but not before Sam has created her first 1/1 token.

Sam’s fortunes turn with a turn-7 Siege Wurm, while I use my Putrefy to pick off her Sandsower. Next turn Sam adds a Dowsing Shaman, while I continue with a Woodwraith Strangler and Elvish Skysweeper.

On turn 9 Sam adds a Fists of Ironwood to her Shaman (bringing a pair of 1/1 Saprolings into play), plays an Elvish Skysweeper of her own, then unleashes her Siege Wurm. I take the trade for the Imp, going down to 17 life. Back to me, I animate Svogthos which pounds in as a 5/5. Next turn, however, things get a little trickier as Sam lands Tolsimir Wolfblood, then convokes to add a Conclave Phalanx, undoing my hard work and going up to 23 life. Back to me, I dredge the Imp back up and recast it alongside a Golgari Brownscale.

Now turn 11, Sam taps Tolsimir to make Voja, the 4/4 Wolf token. Her forces buffed by Tolsimir, she then launches a major assault coming in with three of her tokens, the Phalanx, the Skysweeper, and her Shaman. I block the Skysweeper with my Mossdog, take out the Shaman with the Imp (though thanks to its aura it has trample), then use my Brownscale and Strangler to soak up some of the tokens. Add in a Gather Courage, and when the dust settles I’m at 4 life. Back to me, I dredge and replay the Imp, but next turn Sam casts Overwhelm and comes all in. I don’t stand a chance. 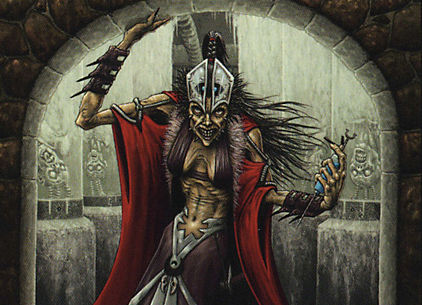 Once again we’re pleased to see a very distinct mechanic cropping up in a Ravnica deck. Dredge plays like nothing else, and rewards you with a fun but challenging method of play that dictates a lot of how the deck unfolds. As we’ve noticed, it’s important to kick off the engine early, but a pilot must make sure not to neglect their manabase development overmuch. Although this would later be remedied with Future Sight’s Dakmor Salvage (as well as mitigated by Ravnica’s Life from the Loam), the only answer here is to balance dredging and drawing. That makes for a skillful tension.

Aside from the novelty of selecting your next draw, however, a lot of the creatures in Golgari Deathcreep aren’t really all that exciting. It can take awhile to get recursive engines like Shambling Shell on-line, and it’s a bit hard to get excited about Greater Mossdog even when its services are needed. To some degree, its hard to escape the feeling that Deathcreep’s fun lies in its mechanic, not in its cards.

Misses: Card selection feels a bit bland; most of the fun lies in dredging moreso than the cards themselves