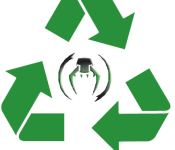 This is not only a slogan for today’s eco-conscious times, but could just as easily apply to the Golgari guild on Ravnica. To the Golgari, no living creature is ever truly dead, but rather lives on through the eternal cycle of life. A person is born, he lives his life, and then, inevitably, he dies… and then his body is fed to the Rot Farms’ crops of shambling plant-zombies. Simple. Elegant. Beautiful.

Of course, every guild in Ravnica must serve a civic function (discounting, of course, the guild that doesn’t exist- Dimir). The Boros, for instance, form its military and police force. The Selesyna provide organised spirituality as well as patrolling roads and byways and other routes of travel. To the Golgari fall the critical tasks of food production for the city’s poor (for those familiar, think ‘Flea Bottom’ and ‘bowls of brown’) and waste management.

If the Boros are the best-known guild by name, mechanically that honour likely falls to the Golgari. To be certain, the Gruul mechanic bloodthirst has had a comeback as the featured ‘callback mechanic’ for Magic 2012, but the Golgari’s dredge ability has been a staple of the older Constructed formats, so much so that in the new Modern format the pinnacle of the ability, the Golgari Grave-Troll, has found itself banned.

Like any that modifies the rules in unusual ways, dredge is an intriguing mechanic. Dredge comes on-line whenever you have to draw a card, be it through your draw step or a spell or effect. In lieu of drawing a card off the top of your library, you may instead return a dredge card from your graveyard to your hand by paying its dredge cost, which is done by milling cards from the top of your library into your graveyard. So if a card has dredge 3, you would skip drawing a card, mill yourself for three, then return that card to your hand from the graveyard.

Strategically, dredge should make it so that by a certain point in the game, you’re hardly ever drawing off the top of your deck. Rather, you’re finding the card you need at the time- be it a spell or creature- and simply using the cards in your library as a resource to dredge more. Naturally, you’ll want to be sure you have a reasonable manabase assembled first. However unorthodox the mechanic and card drawing, the win conditions of the deck are very straightforward. Golgari Deathcreep asks you to deploy creatures, support them with kill spells and recursion, and pound on your opponent until dead. Fittingly, then, let’s take a look at the deck’s beaters. 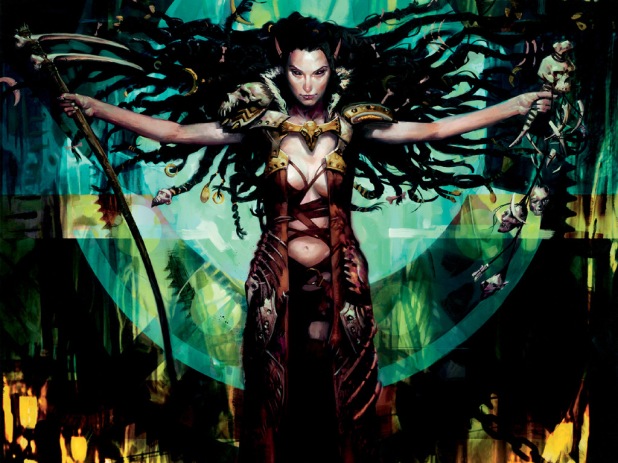 Nourishment from the Dead

Flexibility rather than speed is emphasized in Golgari Deathcreep, as evidenced by its creature curve. The deck is virtually devoid of two-drops, generally the backbone of more aggressive decks, but instead tries to make up for it with a spike at the three-drop slot.

Two Elves of Deep Shadow– a reprint from The Dark- lead us off on the one-drops. Although their mana stings, it can help you get off to a quicker start and give the deck an early edge. Later, they can be useful for mana-fixing in a pinch. An Elvish Skysweeper is essentially anti-flyer insurance. Aerial creatures have long been the bane of Green, though with Black in the deck it’s far less of a vulnerability given the availability of pinpoint removal. Finally, a Thoughtpicker Witch can help ‘recycle’ creatures already on their way out to one last noble purpose- thinning out your opponent’s quality draws.

The Golgari Guildmage holds down the fort at the two-drop position. Like all guildmages here it has two abilities, one for each colour. The Black ability allows you to sacrifice a creature to return another from your graveyard to hand. The Green ability simply adds +1/+1 counters to a target creature. Neither are especially inexpensive, but both have their uses.

The heavy three-drop slot is comprised of four pairs of cards. You have two Infectious Hosts, the least impressive creatures of the bunch. Even with the extra bit of reach the life loss affords you, three mana for a 1/1 creature is rather poor, and its effect is somewhat marginal. On the other hand, the remaining six are all dredge creatures. The pair of Stinkweed Imps kill whatever they touch, and dredge for five. Golgari Brownscales give a solid body, and give you a small bump of life whenever they are returned to hand from the graveyard. Finally, the Shambling Shell has a somewhat fragile body (1 toughness), but it does leave a +1/+1 counter behind when it dies.

Next up we have a few four-drops, beginning with a trio of Greater Mossdogs. Fully 3/3’s with dredge, they have no special abilities outside their moderate size. A pair of Woodwraith Stranglers are a less impressive 2/2. It has a somewhat useful regeneration ability, which is more or less free. Finally, there’s Savra, Queen of the Golgari. Perfectly suited to this deck, she has a Grave Pact-lke ability that triggers whenever you sacrifice a Black creature. Although it costs 2 life to activate, she also rewards you with 2 life for sacrificing a Green one. If the creature you pop is both, then her ability is free!

Finally at the top of the curve we find the deck’s closers. The Drooling Groodion not only has size on its side, it has an activated ability which can both pump another creature and kill or weaken one of your opponent’s. The deck gives you two of them. You also have a pair of Golgari Rotwurms, robust 5/4 bodies that also are a sacrifice outlet and a way to directly damage your opponent. This can win you games amongst even the most stalled board states as you sacrifice your army and drain down a wounded foe. Lastly, there’s the aforementioned Golgari Grave-Troll, whose size depends on how stocked you’ve managed to make your graveyard. 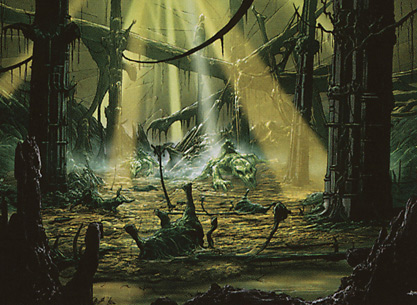 Dedicated to the Process of Rot

A pity, then. that it doesn’t also count your opponent’s graveyard, because Golgari Deathcreep has a number of ways to fill that one as well. It boasts a rather robust removal package which can be said to come in three sizes: small, medium, and large. ‘Small’ refers to a pair of Darkblasts, which are fairly limited in what they can kill. On the upside, they’re not only cheap, but they also have dredge, meaning you can get them back when you need them.

The next size up is twin Last Gasps. These will kill most anything 3/3 or lesser, and because they’re affecting power and toughness rather than just flatly dealing damage, they’re good against creatures with regeneration. Alas, unlike Darkblast, once they’re used, they’re more or less gone- there’s no easy way to retrieve them on their own, so have a care as to how you use them. Finally, Putrefy will kill most anything heedless of size. It also can take out an artifact, making it the most versatile of the lot.

The remaining cards are a mixed bag. The expected graveyard recursion is here thanks to a pair of Recollects and a Vigor Mortis, the latter of which can easily return its target to the field of play rather than your hand. Not limited to creatures, the Recollects are good ways to get back removal or one of your better creatures. A Rolling Spoil is landkill-with-a-twist, that twist being a possible -1/-1 to all creatures. This effect can be tricky, as your deck has a fair share of 1/1’s, although two of them (Infections Host, Shambling Shell) have beneficial death-effects. The upside is that it’s controllable (if you don’t want the sweep, don’t use

to pay for it), though the value of a single landkilling card here is rather debatable.

Lastly, the deck carries a pair of creature auras. Moldervine Cloak gives a solid boost to power and toughness, and it has dredge as well. Necromantic Thirst doesn’t dredge, but it does allow for extensive graveyard recursion by giving you a creature back from your graveyard every turn. It’s a weak card here given that you have exactly two creatures with evasion (the Stinkweed Imps). Notably, the deck conytinues this set’s cycle of nonbasic land, giving you one of the ‘bounce lands’ (Golgari Rot Farm) as well as Svogthos, the Restless Tomb. Svogthos gives you yet another creature option to the deck- and one that’s directly influenced by what you’ve managed to stock into your graveyard.

All in all Ravnica has done a solid job of offering up unique mechanics, and we’re excited to see how the dredging hordes hold up on the field of battle. We’ll put Golgari Deathcreep through its paces and report back in two days’ time.