In the history of Ertai’s Lament, we’ve never bothered to plot a deck schedule out, rather adhering to the simple rule ‘don’t play one you’ve played before.’ In this manner, we ensure that every deck is a part of two different writeups- the main playtest, where I play it, and another playtest as the opposing deck (Jimi or Sam). And for all this time, that’s been sufficient. So it was without any great thought that we did the same with Commander, and everything ran fine until we got to our final game.

Me: “Okay, I’m playing Political Puppets. Jimi, which deck haven’t you played yet?”

Jimi: “Devour for Power. Which one for you, Sam?”

A tragic oversight, and one that we could do nothing about- a lesson learned in a three-player environment. Without planning, overlap can happen. And so we extend our collective apology for those looking forward to three reviews of Political Puppets- alas, our review series will only showcase it twice.

On the upside, Sam opted to go for Counterpunch, so fans of that deck get treated to an extra dose. As before, we’ll go Attack Left/Defend Right, and die rolls have situated Jimi to my left going first, and Sam on my right.

Jimi opens up with a Jwar Isle Refuge, while Sam and I must content ourselves with basic lands. Sam, though, does at least manage a Soul Snare. Next turn, Jimi deploys a Command Tower– a strong start to her manabase- but still has nothing worth playing. Sam deploys a Swamp, and I’m a bit stuck on land. With no other option, I’m compelled to play my Azorius Chancery, forcing me to return my Island to my hand and discard a Jötun Grunt at the end of turn.

Now turn 3, Jimi’s full steam ahead while it’s Sam’s turn to get stuck- she misses her first land drop. I replay my Island and add a Wall of Omens. Back to Jimi who plays a Swamp, Sam misses another drop and has to discard a card (Selesnya Guildmage), and I hit mine to bring out Zedruu the Greathearted. Time to get political!

Jimi summons her commander- The Mimeoplasm– on turn 5, using the Selesnya Guildmage as its base and my Jötun Grunt as its counters bonus. Sam’s still stuck, though, discarding a Golgari Guildmage this time. I drop a Soul Snare of my own, then add a Howling Mine. While Sam flounders and I’m laying foundations, Jimi continues her buildup with a Vulturous Zombie. Sam finally hits a third land drop, but it’s an Evolving Wilds. Unable to play anything, she pitches an Acorn Catapult to get down to seven cards in hand. I play an Island and pass.

Now turn 7, Jimi adds an Extractor Demon to her board, but thus far Sam’s Soul Snare has done a fine job of holding Jimi’s beaters at bay. Sam plays a Sakura-Tribe Elder and passes, but at the end of her turn I use Zedruu to donate my Howling Mine to Sam. This will let me draw another card during my upkeep and gain 1 life, and I reap the benefits immediately. On my turn, I play a Dreamstone Hedron and pass. Next turn Jimi decides to probe Sam’s defenses with a 5-point attack from the Extractor Demon, leaving her at 35. She then adds Wrexial, the Risen Deep– a formidable array. Sam plays Ghave, Guru of Spores, discarding a Plains to again get down to 7 cards. For me, I’ve got a few options, and see the glimmer of a plan taking shape. In my hand are both Reins of Power and Insurrection, as well as Crescendo of War. There’s not enough power on the board for a 1-shot kill of Jimi, but the Crescendo will see to that. I hit Jimi with a Punishing Fire to trim down my hand size after deploying a Court Hussar, and dicard an Island before passing.

Jimi continues her attack on Sam on turn 9, sending in both Wrexial (who’s unblockable thanks to his landwalking) and the Extractor Demon. Sam’s now at 25 life, but Jimi has a little something for everyone. Zedruu heads back to the Command Zone courtesy of a Dark Hatchling, and Jimi passes. Sam has nothing except a Yavimaya Elder, but with all of Jimi’s threats being evasive she decides to attack me with Ghave for 5. Once it’s my turn I begin to spool out my plans. I first play a Sol Ring, as I’ll need all the mana I can get. Then I drop the Crescendo of War. Next turn Jimi sends another delegation of pain Sam’s way, forcing Sam to trip the Soul Snare and exile Wrexial. Still, with the Hatchling added and a little extra from the Crescendo, Sam still takes 10 and is now vulnerable at 15 life. Over to Sam, she swings with Ghave and the Elder, which I let through for 11. I’ll need my Hussar for my plan, and I’d rather save the Wall for later. I’m now at 26 life. Sam ends by adding some extra tokens courtesy of a Bestial Menace before putting a Fists of Ironwood on Ghave and passing turn.

It’s now my turn, and I spring the trap. I cast Reins of Power on Sam, taking command of Ghave, the Elder, and the five tokens (3/3, 2/2, and a trio of 1/1’s). I send the tokens in against Jimi- I want to present her with smaller targets to get a small chunk of damage in, but can’t give her opportunity to trade out any of her creatures. I’ll need them all once it’s Jimi’s turn for treason. Jimi responds to my attack by making a 1/1 Saproling with the Mimeoplasm, then she favourably blocks every token but one, taking four points of damage and losing none of her creatures. Three of Sam’s tokens die as well, a perfect outcome all around. I then sacrifice the Elder to let me draw a card, then sac both tokens and then Ghave himself to give my Court Hussar (under Sam’s temporary control) a trio of +1/+1 counters. By the end of my turn, Sam is looking down at a variety of land, a Howling Mine… and ashes. She has nothing else. Thanks to the Extractor Demon’s milling, the Vulture Zombie is now massive- a 26/26 flyer. Jimi will now effortlessly dispatch Sam, leaving me free to Insurrection her beaters for the win!

It’s now turn 11- the last turn of the game. Jimi plays Rise from the Grave on Sam’s Golgari Guildmage, then sends in her air force to close Sam out. It’s now down to the two of us. Then, almost as an afterthought, she casts Windfall.

I look at the two land I have open on the board and the Spell Crumple in my hand and I want to cry. If I’d only sacrificed the Yavimaya Elder to Ghave instead of going for the free card, I’d have had the extra land needed to counter it. Instead, all I can do is Whirlpool Whelm the Zombie back to Jimi’s hand, which then sees it sent to the graveyard as we both discard our hands and draw 7. I’ve lost my Insurrection, and with it, the game. Jimi nets an Eternal Witness in her refill, which she uses to retrieve the Vulturous Zombie. I get almost nothing but lands. Back to me, I frantically look for anything I can get and still cast to prevent the alpha strike I know is coming. I try Skyscribing, it gets me nothing useful but a Vision Skeins, which I also play for a lark. Nothing. Buoyed by an alarmingly large Crescendo of War- my own Crescendo of War- Jimi swings for the win. 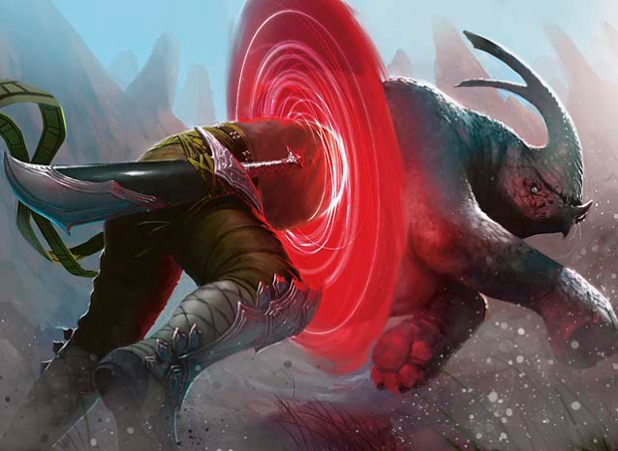 Sadly, this deck is the one that suffered the most from our three-player format, as it requires a bit more open terrain and less restraints to work to its full potential, but even still I had the most fun playing this deck over any other. At a larger table, the political wheedling, bargaining, and tactical aid drops would be an absolute blast. Zedruu’s ability to donate your unneeded permanets for future advantage is very powerful, though it does cause some tension in the early game when you’re looking to establish position but don’t want to miss out on opportunities for growth. To be fair, it’s hard to feel bad for someone caught between two good options.

I wasn’t very threatened by the slow-to-develop Sam in this game, but in our pre-game ‘friendly’ I had both Propaganda and Ghostly Prison on board, a very effective counter against mass aggression (at least until Jimi’s surprise Relic Crush paved the way for my destruction). All in all, Political Puppets seems to have about the right mix of card draw, removal, and disincentives for enemy attack to give you sufficient time to set yourself up. It is, however, rather reliant upon at least a decent start. In the first game I never managed to donate anything because a weaker start saw me playing catch-up and threat neutralisation, and what permanents I had were indespensible (a Fellwar Stone giving me much-needed Red mana, for instance). Without some early gift fodder, Zedruu’s charms won’t be enough to put you ahead.

Hits: Superb balance of card options give you a strong diplomatic option for Commander; overall theme of the deck is a great deal of fun

Misses: Weakest deck of the five in terms of creatures- only one deck has as few as you do (Mirror Mastery), and that deck’s commander can double each creature spell cast; highly personality-dependent, relies upon your social skills which may limit the deck’s strength and/or appeal