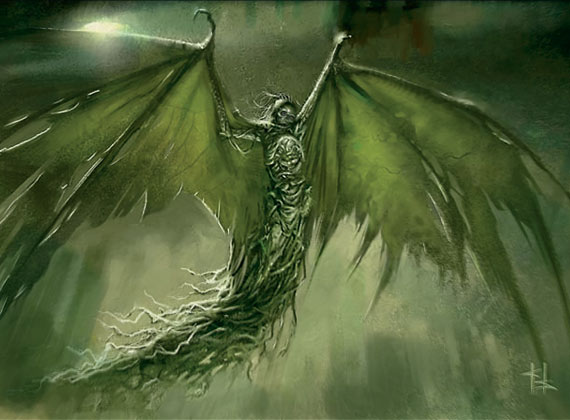 Once more to the arena we go, with Devour for Power in the showcase seat. Unlike previous games, the dice rolls yielded a different outcome this time- Jimi to my left, Sam to my right. With our focused attack policy in place, that meant that I would have to balance striking at Jimi while defending myself against Sam. For her part, Jimi selected the Green-Blue-Black Counterpunch. Sam opted for the doubling strategy of the Blue-based Mirror Mastery. Here is how the battle unfolded.

We all begin with play-land-pass, but turn 2 I know I’m in for some trouble as both Jimi and Sam drop Lightning Greaves. I take small consolation in my Golgari Signet, followed by a turn-3 Dimir Signet after Jimi’s and Sam’s turns are blanks. Things begin to open up on turn 4 as Jimi plays a Sigil Captain, girds it with the Greaves and plows into Sam for the opening 3. Sam plays a Kodama’s Reach to smooth out her land before Brainstorming, while I refill my hand a bit with a Mulldrifter.

Now turn 5, Jimi gets her commander on the board, equipping Ghave, Guru of Spores with the Greaves and attacking Sam for 8. Sam’s turn is a blank, while I summon a Vulturous Zombie after a 2-point attack on Jimi with my Mulldrifter. Something about the Zombie triggers an alarm in Sam’s mind as she counters it with a Spell Crumple. In retrospect, it was probably the look on my face the instant I realised that it counted cards- not just creatures-that go into graveyards. Next turn sees Jimi go large, moving the Greaves to the Sigil Captain, placing Vow of Wildness on Ghave and swinging for 11. Down to 18 life, Sam needs to stabilise quickly- one more hit from Ghave and she’s dead to commander damage regardless of her life total. She lays a second Vow of Wildness on Ghave, then summons her own commander, Riku of Two Reflections, to the battelfield. Naturally, she wastes no time in equipping her own Lightning Greaves to him before passing. Back to me, I lay down a Troll Ascetic followed by a Grave Pact, putting me in good defensive position. Another 2-point attack from the Mulldrifter, and I pass.

It’s now turn 7, and here’s where the real trouble begins. Jimi drops down a Celestial Force, then equips it with the Greaves. Neither Sam nor I seem to be holding instant-speed removal, so now her massive lifegainer is well-protected. Thanks to Ghave, Jimi seems particularly well-equipped against my Grave Pact, so I’ve my work cut out for me. With Ghave held in abeyance thanks to Sam’s Vow, Jimi can only swing in for 10 damage and Sam clings to life at 8. The Sigil Captain finally meets his end thanks to Sam’s Electrolyze, which gets doubled off of Riku. She then plays a Fierce Empath and copies it as well, tutoring up a Trench Gorger and Intet, the Dreamer. Over to me, I attack with my Troll and Mulldrifter. Jimi calls my bluff and blocks the Troll, forcing me to regenerate it, but the ‘Drifter still gets in for its 2. With her lifegain working overdrive, Jimi’s now at 40 life. I then summon Brawn and pass.

Back to Jimi, she attacks with the Celestial Force, but it’s halted by a Fierce Empath shoved in its path. Sam plays the Trench Gorger, copying it with Riku then proceeding dumping 31 lands out of her library. When the dust settles, she’s got a 15/15 and 16/16 Gorger- not good. I pick off the 16/16 token model with a Dark Hatchling after attacking for the usual 2. I then end my turn and wait to see what happens. Jimi has little to add- the 15/15 Gorger sees to that- but unwilling to let the aggro die she plays a Deadly Recluse, girds it with the Greaves and presses the attack for 1. Sam reinforces her increasingly-formidable defense with a pair of Hydra Omnivores, while all I can do is send the Hatchling to attack Jimi, holding the rest of my creatures in defense. As chump-blockers they’re no great shakes, but the Grave Pact lends them no small power. My attack on Jimi leaves her at 53 life. The Celestial Force is getting out of hand.

It’s now turn 10 and Jimi overloads on 1/1 tokens looking to enable a lethal strike past Sam. She drains Ghave of all his counters to make a pack of five Saprolings, then hardcasts a Cobra Trap for a quartet more. Sam plays Intet, the Dreamer, doubles up on Tribute to the Wild (forcing me to smash both of my Signets, while Jimi only loses her Greaves), and to drive the dagger deeper she uses Hull Breach to eliminate my Grave Pact. Still, the threat of Jimi looms large and Sam opts to keep her army at home. My turn is a lamentable blank.

Next turn Jimi goes for it, swinging in with 9 1/1 tokens. Sam blocks five of them with her creatures, but four still get past to leave her at 3 life. She then deploys one of her deck’s silver bullets against Devour for Power: Necrogenesis. It’s been an unusual game with very few nontoken deaths, so the graveyards are even now quite thin indeed. Necrogeneis means Jimi and I will now be fighting over resources, and her instant-speed activation means that Jimi will usually win. Jimi breaks it in by exiling the Fierce Empath in Sam’s yard, adding another 1/1 creature token. Seeing the writing on the wall and deciding to go out with a go at kingmaker, Sam declares an alpha strike on me. My Troll Ascetic blocks the Trench Gorger and gets regenerated. Brawn takes one for the team in front of the Hydra, and Intet is stopped by the chumping Dark Hatchling. Just like that I’m down to 19 life and with a perilously thin board presence, while Jimi’s well-entrenched and now at 68 life. Just for added salt, Jimi goes fishing in my graveyard and converts my now-fallen troops to Saprolings thansk to Necrogenesis.

Sam finally dies on turn 12 when Jimi alpha strikes past her wide-open defenses- Sam even declines blocking one of the Saprolings with Riku. Thanks to the Necrogeneis, my hand has turned to rubbish- cards like Rise from the Grave and Desecrator Hag really suffer when the graveyards are bare. I play a Syphon Mind, forcing Jimi to pitch the last card in her hand- a basic land- and luck into an Avatar of Woe. Jimi’s now at 74 life… would it be enough? 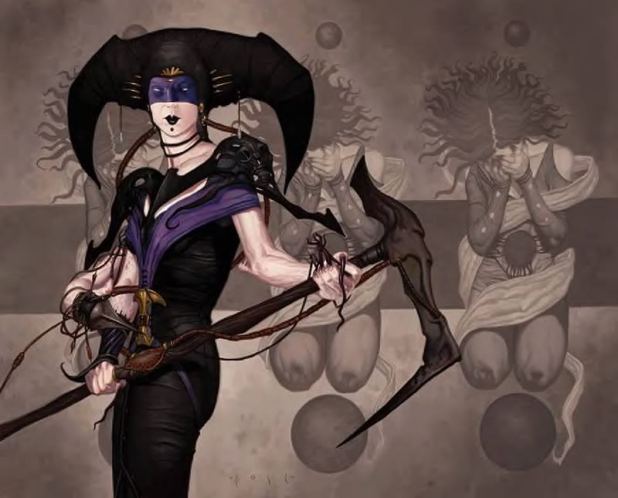 And Then There Were Two

With a well-supplied army waiting for fresh blood, Jimi wheels and sends them in on me. My Troll Ascetic takes the brunt of it, holding off the Celestial Force, but the seven 1/1’s slam into me, leaving me at 12. In pure desperation mode, I cast the Avatar of Woe and pass. As if things couldn’t get any worse, Jimi then deploys a Skullclamp, which in her deck essentially reads: “

, Sacrifice a saproling: Draw 2 cards.”  Nevertheless, Jimi wants things wrapped up and opts to send in the troops instead of playing shenanigans. She smartly equips the Skullclamp to the Celestial Force and attacks. I use the Troll to chump the Force, then have the Avatar eliminate two more Saprolings (blocking one and tap-killing the other). Taking five, I’m now at 7 life but have for the moment held off the wave tactics.

Over the following few turns, Jimi taps into the ridiculous card-drawing engine she’s established, feeding Saprolings to the Skullclamp for cards, then recasting Ghave to refresh her Saproling supply. After the Avatar of Woe kills off the Celestial Force, we enter an uneasy detente. Jimi churns through card drawing, plays some creatures like the Vampire Nighthawk and Deadly Recluse. They die, of course- the Avatar sees to that- but in dying they feed the card drawing engine. In essence, Jimi is using small-ball critters to feed her search for some game-ending options, and no creature stays in the graveyard long enough for me to bother with my commander. Eventually, she lands an Acorn Catapult and there’s the game.

Taken at face value, this was a bit of a disappointing outing for Devour for Power. Not only was the deck a nonentity for much of the game while it attempted to build itself up, but a first half largely devoid of corpses to plunder became a crippling setback once Jimi’s Necrogenesis hit the table. Overall, this was disappointing effort, but they come with the game. This was a great example of what happens to the deck when it falls behind- the graveyard is a resouce second only to land here, and if deprived of it the deck is at considerable disadvantage.

It’s worthy to compare this to the first match we played, our “friendly” which we typically use as a warm-up to familiarise ourselves with the decks. In that game, Devour for Power absolutely dominated. I got off an early Buried Alive, sending an Avatar of Woe, Artisan of Kozilek, and Wrexial, the Risen Deep to an early grave. Next turn I brought out The Mimeoplasm, using Wrexial as a base and the Artisan as the bonus, resulting in a 15/18 swamp-and-islandwalker that had built-in card advantage when it connected. Jimi had an answer- sorrow!- but after a Shared Trauma I was right back in it with a Stitched Together Avatar. An Extractor Demon and Scythe Specter do their bit to keep the graveyards wells-stocked, and the outcome was never in doubt.

Two games, two very different outcomes. Regardless of the actual strategy behind it (in this case, graveyards and recursion), the feast-or-famine model is not at all unusual in Magic, and Devour for Power is no exception. When it works, it can really work… but when it fails, it can really fail, too.

Hits: Superb synergy between cards that support the graveyard strategy; tremendously fun construction whose commander (The Mimeoplasm) allows for a wide variety from game to game

Misses: Alarminly little spot removal for a Black-base deck; few ways to affect a board reset outside Oblivion Stone or a carefully-timed Living Death, often found myself wishing for a Black Sun’s Zenith or Damnation