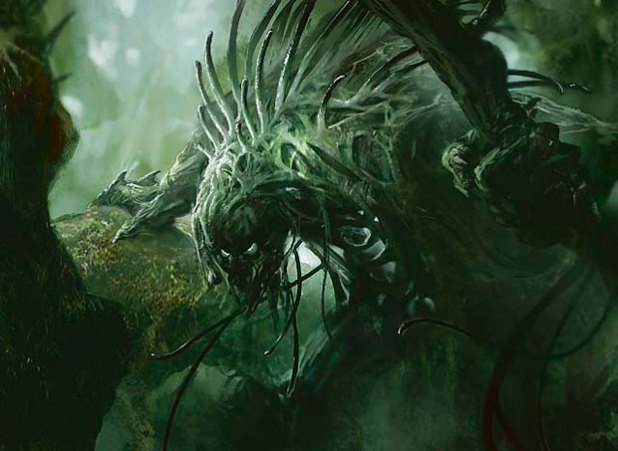 It is a curious thing how history when running its own course has a tendency to return to the same patterns time and time again. A mind unattuned to this flow of history has little chance to learn the lessons the past teaches, and thus avoiding the past’s mistakes. One can see no better illustration than the tendency for destinies to run in parallel than by examining the shared fates of the elves of Sarpadia and the humans of Drakkus. We recently visited the downfall of the Sarpadian Elves, and related the following tragic tale:

The Elves raised the Thallids as a crop, not unlike cattle, and it appeared that Thelon’s unique solution had saved his people.

For a time, anyway, for nature is an unpredictable thing. The Thallids did not stop growing and developing while in captivity, and before long they became self-aware, which in turn led to aggression against those who were cultivating them for food. That Elvish society was riven by fierce debates over the ethics of their treatment of the Thallids, though this was of little consolation to the Thallids who were continuing to be led to the slaughter to put food on the tables of the Elves. The Thallids rose up against their Elvish harvesters, and the fragile Elvish civilisation came crashing down to ruin. Source

In another time, another place, there were the humans on Drakkus. Had both peoples been able to communicate with one another, the fate of one might well have been spared.

When monsoons devastated the land of Drakkus, the herds drowned and the harvests washed away. The humans there were forced to the fungal forests to find sustenance, and find it they did—in the form of the mycoids and their saproling offspring. What the humans saw as salvation, the mycoids called genocide, and they declared war on the invading mammals. Mages tore through the sporeborn troops with fire and steel. Only when the mycoid hero Ghave, Guru of Spores emerged did the tide finally turn. Gifted with mystic influence over the sporeborn, Ghave sculpted the fungal matter of his people into an ever-mutating army and reclaimed his forest home. Source

It is against this now-familiar backdrop of time and destiny that we examine today’s Commander deck, Counterpunch. 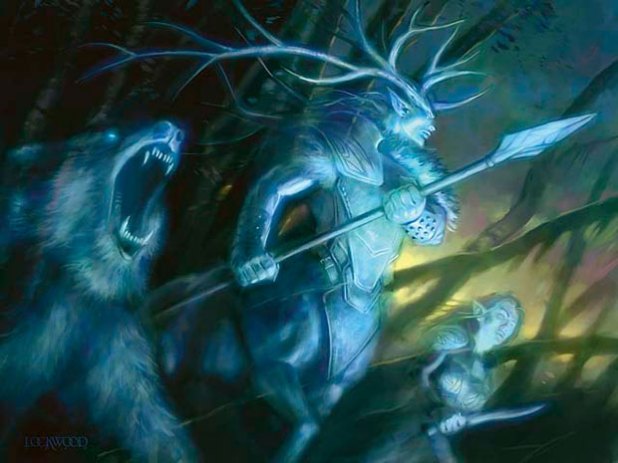 The aforementioned hero of the fungal folk, Ghave, Guru of Spores, is the primary and mythic commander of Counterpunch, a Green-Black-White-wedged creation that sees token creatures and counters as its stock-in-trade. A 5/5 for five mana, Ghave takes his power and toughness in the form of +1/+1 counters. and has twin abilities that allow for a great deal of instant-speed shenanigans. For a mere

, Ghave can remove counters from himself or other creatures you control and generate 1/1 Saproling token creatures. Another

lets you do the reverse- sacrificing a creature to add a +1/+1 counter to another. Given the ease at which this can be done, you’ll seldom let creatures to go waste on removal or lethal blocking- simply pop them to add to another creature, and you’ve avoided taking a total loss on the deal.

Your alternate mythic commander is Karador, Ghost Chieftain. One of cards spoiled some time ago as part of the teaser for the Commander series itself, Karador has a built-in mechanism designed to fight the Commander death tax for losing your general. For every creature in your graveyard, he’s cheaper to cast. Furthermore, once per turn you’re allowed to cast a creature straight from your graveyard into play with no drawback. Both commanders have a “nothing is wasted” subtheme going, where even your losses from attrition aren’t entirely losses at all. Ghave will build your army on the back of your casualties, while Karador may give them a second chance.

Your final commander is Teneb, the Harvester, the legendary wedge-coloured Dragon from Planar Chaos. The Dragons from that set are auto-includes for the Commander cycle of decks. In keeping with the waste not, want not theme of Counterpunch, Teneb lets you return a creature from a graveyard (not just yours) to play under your control every time he deals combat damage. 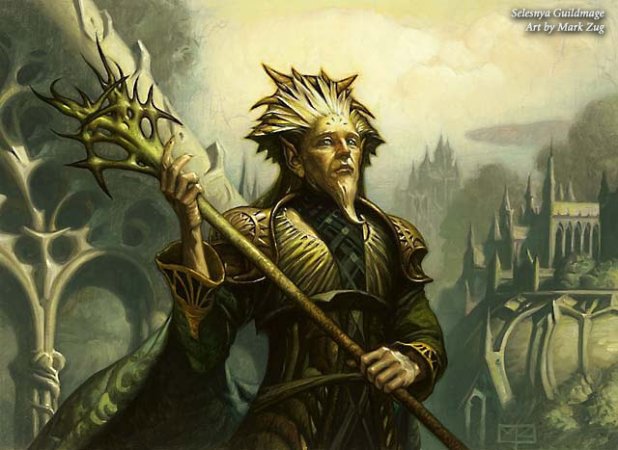 Join Us in Our Chorus

Counterpunch blurs the line between creature and noncreature spells as much as any deck in the Commander series, and in that regard it’s surprisingly (and delightfully) intricate. At its core, you’re looking to generate a swarm of token creatures, then employ a number of shenanigans with them to either pump them up into a formidable fighting unit all their own, or use them as another raw material for additional effects. Like our review for Devour for Power, we’ll be blurring some lines ourselves with regards to the coverage. Rather than adhere to the traditional creature and noncreature divide, we’ll be looking at clusters of cards that further each of your objectives.

Token Generation: It’s here that you have the greatest number of options- there should be little preventing you from reliably amassing at least a few token creatures throughout the course of a game, and you’ll be making them any which way but loose. You’ve got sorceries (the join forces Alliance of Arms, Storm Herd, Bestial Menace), enchantments (Necrogenesis, Awakening Zone, an aura (Fists of Ironwood), and instants (Cobra Trap, Nemesis Trap). Heck, you’ve got so many ways to make tokens it’s possible that your enemies will end up with some as well (Afterlife, Acorn Catapult). Those last two are a great segue into another class of token generation: removal. If you can pick off an enemy beastie and get some tokens in the bargain, so much the better! Towards that end you have a Death Mutation and Syphon Flesh as well.

Not enough? Don’t worry, there are plenty more token generators in the creature department. The Symbiotic Wurm sprouts a bunch when it finally dies, while the Spawnwrithe only gives them to you one at a time after a successful combat, but on they upside is that they are additional Spawnwrithes. Against an unprotected opponent, that first one becomes two, two become four, and so on. Penumbra Spider replaces itself upon death, while the Hornet Queen comes equipped with an entourage. Finally, for repeatable generation you have a Selesnya Evangel, which can net you a new Saproling once per turn, and a Selesnya Guildmage, whose output is limited only by the amount of mana you have to devote to the task.

Token Utility: A sizable number of your other cards interact with the tokens, and not all of them in a kindly manner (from the tokens’ point of view). Aura Shards lets you destroy an artifact or enchantment each time a creature enters the battlefield under your control- brutal with cards like Hornet Queen which see numbers entering at once. The Sigil Captain, meanwhile, has an immediate size buff for any 1/1’s you generate, making them automatically enter as 3/3’s. On the other side of the coin we have Attrition, a reusable removal piece that requires the blood of one of your own. When you’re cranking out scads of expendable token creatures while they’re playing creature cards, it doesn’t take long for the asymmetry to manifest itself as serious card advantage in your favour. Finally, there is Hour of Reckoning, a mass sweeper that- conveniently- leaves your token creatures behind! 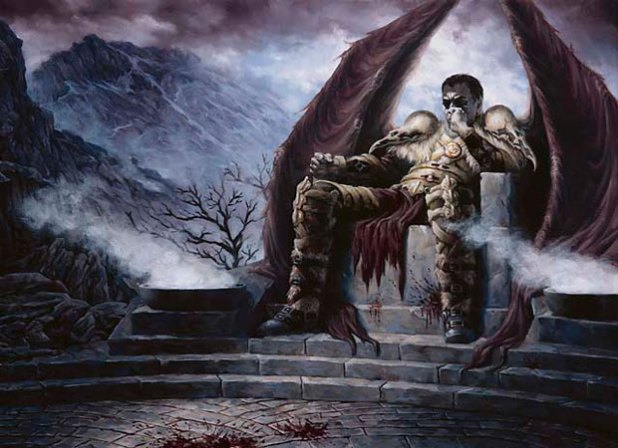 Harvest the Crop of Wisdom

The remaining cards are a little less easy to pigeonhole, but nevertheless have solid synergy or utility within the deck. Consider the series of cards that cares about +1/+1 tokens. The Fertilid, Scavenging Ooze, and Spike Feeder all enter play with them, along with some added benefits like graveyard hate and mana ramping. The Aquastrand Spider not only has the Simic guild’s graft ability, but it can enable any of your creatures with at least one +1/+1 counter on it to block flyers. The Chorus of the Conclave lets you put counters on any creature you cast, while once they’re out the Golgari Guildmage can take over that duty, albeit for a much steeper cost. Note also that the Golgari Guildmage can help you cash in token creatures in exchange for creature cards in your graveyard.

When it comes to removal, you’re in fine shape here as well. In addition to the removal already discussed above, there are a number of other options for dealing with pesky permanents on the board. Both the Shriekmaw and the Dark Hatchling will two-for-one an opponent as they enter the battlefield, while the Monk Realist will do the same for enchantments. The Squallmonger can help neutralise flyers, though have a care when playing her- any player may trigger her ability, and it damages every player at the table (like a Hurricane). Less egalitarian is Vish Kal, Blood Arbiter– a source of steady and repeatable removal that will put your token army to noble purpose. Then there’s a Tribute to the Wild, an edict effect for artifacts or enchantments that hits the entire table (except you). Spot removal comes in the form of a Doom Blade, Oblivion Ring, Mortify, and, to a lesser extent, a Soul Snare. You also have the usual cycle of Vows (Duty, Malice, and Wildness) which are standard-issue in the Commander decks. Because of their ability to neutralise a threat we’ve considered them removal, but in truth they are quite a bit more versatile. Finally, if you’re facing long odds Hex can help even things up a bit, and if your opponents are shy on creatures, well, you should have a token or two you can offer up to help move things along.

Beyond that you have some deathtouch options in a Vampire Nighthawk and Deadly Recluse, a Nantuko Husk who loves to snack on token creatures, and a Celestial Force. Lifegain might ordinarily not be a high-priority strategy, but it’s hard to argue against this much of it attached to a very sturdy body. For miscellaneous noncreature options, there’s the Lightning Greaves (also standard-issue), a Footbottom Feast for recursion, and a Harmonize for extra card drawing. The final, nasty inclusion there is a Skullclamp, which can be equipped from token to token, killing them off for cheap and letting you reap a windfall of cards over and over again. 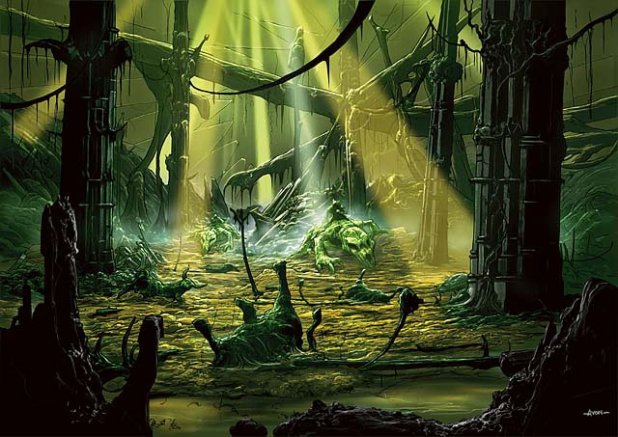 To get everything moving, Counterpunch gives you a solid mass of mana ramp and fixing. Naturally, there’s the trio of Ravnica signets (Golgari, Orzhov, and Selesnya), as well as the auto-include Sol Ring and a Darksteel Ingot. For non-artifact mana sources, we see a Sakura-Tribe Elder and Yavimaya Elder, both strong sources of acceleration, as well as a Cultivate.

Of course, this would be far from sufficient to ensure a reliable mana distribution, which is where your nonbasic lands come in. First there’s the cycle of Vivid lands (Marsh, Gove, and Meadow), which can give you mana of any colour- albeit in limited supply- in addition to their primary colour. The Ravnica ‘bounce’ lands act much as the signets do, giving you two mana per activation, and again you have all three: Golgari Rot Farm, Orzhov Basilica, and Selesnya Sanctuary. Lastly, the Onslaught cycle of cycling lands is represented as well with a Barren Moor, Secluded Steppe, and Tranquil Thicket. The remaining land are all one-offs, and standard for the Commander offerings: Command Tower, Evolving Wilds, Temple of the False God, and Rupture Spire.

There is admittedly a certain irony in the primary colour of the deck being Black- it’s not the one you’d normally associate with a growing strategy. But given its heavy focus on token creatures and counters, it’s a relatively cohesive one. We’ll be putting it to the test in our next review, offering final thoughts and analysis before giving it an overall score. See you then!

Read more from Commander
← Commander: Devour for Power Review (Part 2 of 2)
MBtB: Our Biggest Giveaway Yet! →
4 Comments Post a comment