With subtlety and subterfuge cast aside, the forces of Mirrodin are now engaged in open warfare with the Phyrexian infestation that had festered unseen in its core. And while the Phyrexians have genetically engineered living germs to animate their gruesome artifact weaponry, the Mirrans have found the power to inspire and rally their forces on the battlefield. To defend their homes, their lives, and indeed their very existence, they harness the power of the battle cry, as represented in the second Mirran intro deck, the imaginitively-named Battle Cries.

Unlike Mirromancy, Battle Cries is cut from a far more traditional mold with regards to its composition, boasting a 23/13 split in favour of creatures. When you factor in that nearly half of the noncreature spells are actually alternate ways to summon creatures, the picture that emerges is very clear. This is a deck that wants to hit in the red zone, and hit hard.

The battle cry mechanic has been engineered to enable this. Quite simply, whenever a creature with the keyword attacks, all its fellows who are attacking alongside get +1/+0 until the end of turn. Multiple instances of battle cry do stack, so it doesn’t take much to get a powerful strike out of even the smallest of creatures. Today we’ll be examining this mechanic, and seeing how the deck has been built to support it. 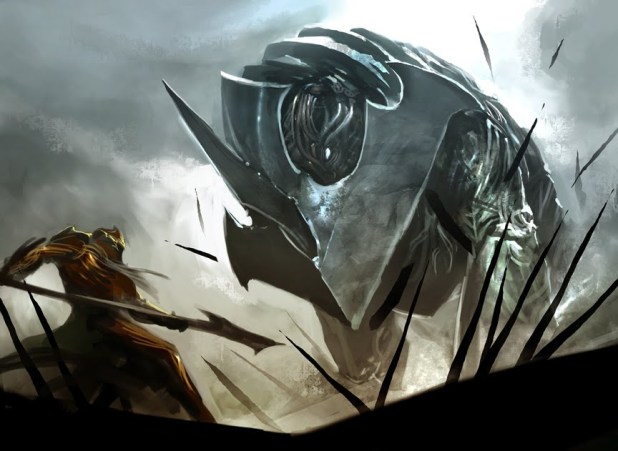 Hope to All Who Survived

To get the most out of battle cry, you simply need two things. First, you need a creature with the keyword leading the attack. With seven in the deck in a range of costs, you’ll seldom have much difficulty there. The cheapest are the pair of Signal Pests, which for all their durability might as well read: “Sorcery- All your attacking creatures gain +1/+0 until end of turn.” It’s not often that this little fellow will be allowed to live unless your opponent lacks flyers, damage and removal, though the deck does pack a Whispersilk Cloak and a Viridian Claw as equipment options so it’s certainly possible. The other way, of course, is to make sure that the rest of your attackers are hitting like trucks, so that your opponent can’t permit that much damage through.

Only slightly more hardy are the two Accorder Paladins. Their 1 toughness will usually see them have the same fate as the Pest, but on the upside they’ll more than likely be taking something with them when they go. For true inspiration, the kind that endures, there are a trio of Kuldotha Ringleaders. Essentially Berserkers of Blood Ridge with battle cry, their beefy 4/4 body gives them considerably more durability in the red zone. The “attacks each turn” clause is unfortunate, so you’ll want to be sure to cast them when the board state is favourable. If you manage to get the Whispersilk Cloak equipped to them, the game will be over before long.

Now that we’ve covered the battle cry leaders, let’s look at the next ingredient: a swarm of attackers. Not even counting the Pest or Paladin, nearly one-half of your forces cost two mana or less. Two Iron Myr and a Gold Myr pull triple-duty, giving you a cheap attacking option, mana acceleration, and upping your artifact count all in one. That metalcraft trigger is more important than you think- not only are your two Ardent Recruits breathlessly waiting for you to deploy your third hunk of metal, but so is one of your closers (Razorfield Rhino) and all of your burn (two Galvanic Blasts and a Concussive Bolt). Towards that end, you have a pair of Memnites at your service, as well as a Myrsmith.

Rounding out the cheap beats are a Leonin Skyhunter, a slot-filling Silvercoat Lion, and a little extra versatility in the form of a Leonin Relic-Warder. Battle Cries doesn’t carry a single 3-drop creature (more on that shortly), but instead skips right to the four-and-ups for your midrange beaters and closers. There’s the aforementioned Rhino, of course, as well as its brother-in-bulk the Siege Mastodon (like the Lion, it’s Core Set vanilla-filler). There are two Peace Striders, rather inferior to their Phyrexian version but serviceable here. Finally you have your premium rare bomb, the Victory’s Herald. Capable of closing out games all by herself, she’ll often put the game away in a turn if you have a handful of bodies. Even if you can’t finish your opponent off on the spot, the massive life buffer it provides will often be enough to compensate for leaving yourself open to attack.

When we said above that there are no 3-drop creatures in the deck, that’s only literally true. As it happens, Battle Cries isn’t finished helping you fill the field with bodies yearning for inspiration. A trio of Master’s Call are included, and they’re a perfectly versatile spell here. Giving you two 1/1 Myr tokens at instant speed makes it ersatz removal, surprise attackers (when cast at the end of your opponent’s turn), or even an unexpected metalcraft trigger. If that’s not enough, there’s always a pair of Origin Spellbombs for more Myr, or even the White Sun’s Zenith for as many cat tokens as your mana base allows.

To help clear a path through the red zone, Battle Cries gives you the typically modest removal suite to draw from. There’s the burn we mentioned before with the two Galvanic Blasts and a Concussive Bolt, the latter of which can also help set up an alpha strike if you happen to have triggered metalcraft. Finally, a pair of Arrests can help lock down a particularly unwelcome defender or utility creature.

Overall, Battle Cries seems a fine deck and well-honed to do what it’s after- killing in the red zone with a White Weenie-based approach and some typically Boros-style support. Notice what Wizards is doing here with this latest round of decks, taking a blended-mechanic approach. Doom Inevitable took proliferate and combined it with living weapons. Battle Cries now takes metalcraft, and pairs it with battle cry. The synergies here are very strong, with each mechanic supporting the other. Battle cry’s Signal Pest helps hit metalcraft. Metalcraft enabler Master’s Call gives more swarming cogs for the engine of war.

Join us next time when we put the deck to the test, entering the field of battle against the Phyrexians!