Announcing ‘Whispers of the Muse’ 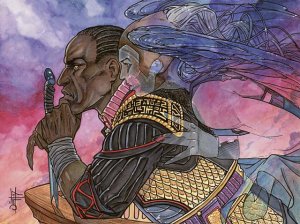 We here at the Lament do love a good series, but this latest one has come about at the direct inspiration of members of the community. When Oscar posted a plea for deckbuilding help on Magic 2011’s Power of Prophecy, we thought we’d go ahead and post it on the front page- after all, while our archives are widely combed through, the members of the community most active here are amongst those least likely to find it.

Inspired by the flood of responses, Stric9 then took it a step further by suggesting that we turn this into a feature or forum staple. While we don’t have forums here (though it’s something to consider- see the current Thoughtsieze poll), we certainly can do the former! And so, we’re proud to announce Whispers of the Muse, an occasional feature where we tap into the community to help a reader deckbuild. We’ve long appreciated the polite and welcoming tone that has prevailed amongst the comments here- it’s a fantastic resource for the new or returning player who can ask for help without fear of getting “trolled” and without being made to feel bad about learning the game, and it’s all thanks to the readers and regulars.

So look for future Whispers of the Muse to follow in the same footstep’s as Oscar’s deckbuilding post, and as always comments, inputs, and insights are welcome!

We’ll get a more formal submissions process up soon, but in the meantime if you’d like to have your deck considered for this series, send the following to us at ErtaisLament (at) gmail.com

1. What preconstructed deck are you using as the foundation for your deck? Because we’re a site dedicated to precons, we’ll want to restrict the series to precon-based deckbuilding, at least for now.

2. What restrictions are you looking at? Do you want suggestions that are legal for Standard? Extended? Block? Anything goes?

3. Give us as much direction as you’d like. Here’s where you let us know what colours you’d like the deck to end up, or if you want it to be aggro, control, or anything else. Any cards you’re looking to build around? Already own a mythic you’d like to see integrated? Let us know here.

As an occasional series, we’d enjoy hearing a little bit from everyone who’d like to be featured. Feel free to submit a deck for consideration as often as you like, but please note that we will look to rotate the spotlight as often as we can, so you may want to limit submisisons to the deck you’d most like to see first!