Just in time to tease us with new contect for the forthcoming Scars of Mirrodin set, Wizards has released a new Duel Deck. This time, it features two mainstays from Alara Block, Elspeth, Knight-Errant and Tezzeret the Seeker. Certainly if for no other reason, this Duel Deck has been the subject of considerable hype due to its printing of a high-dollar card (Elspeth): a package ostensibly less- pricewise- than the sum of its parts.

With such decks, however, one has to ask what value they are getting for their money. Certainly the term ‘value’ comes in many flavours, but we’ll be looking to answer the specific, fundamental question of: how does the deck play? Over the next four columns we’ll be examining the latest Duel Deck in the Ertai’s Lament manner: a piece on the deck’s construction followed by “in the field” testing. We’ll begin today with Elspeth’s mono-White deck.

From top to bottom the design of this deck seems very much Elspeth’s, a delightful accomplishment. For those unfamiliar with her Planeswalker card, Elspeth produces Soldier tokens, helps them get in for damage, and ultimately shields her array of forces in a vast aegis, rendering them indestructible. As you might imagine, then, her deck has a very familiar curve:

Looking at the crammed one- and two-drop slots, this screams White Weenie, a deck archetype that makes frequent use of Soldiers. This one does not disappoint.

The deck begins with some of the usual suspects: a pair of Elite Vanguard for early punch, with an Infantry Veteran one-of for a little splash of utility. A Subtheme of Kithkin are represented in the very useful pair Mosquito Guard and Goldmeadow Harrier (the Harrier a ‘decoy’ type critter), but the most interesting choice is the inclusion of a Rare one-drop, the Loyal Sentry. At first appearing like a 1/1 with Deathtouch, a closer look examines considerably more subtlety in the card- it need not actually get in any damage to destroy the creature it blocks, so it’s a nice answer to an attacker with First Strike. Although the inclusion of a creature optimised for blocking shaves a little aggression out of the deck, it can disincentivise your opponent from swinging in with their best creature, buying you some time to develop your board position. Not bad for a wee one-drop!

Moving up the scale, Kor and Humans fill the ranks, starting with a pair of Kor Skyfishers (superb!) and a lone Kor Aeronaut. The Temple Acolyte echoes some of the annoying Lifegain foes of Elspeth in the Duels of the Planeswalkers game often experience, and isn’t all that great besides. About the best thing that can be said about the much-derided Glory Seeker is that its art is a fantastic upgrade from the original.

With just over half its creatures playable early, the deck expects you to make do with early threats, and opts to pack in a complement of bombs rather than adhere to a gradual curve. Expect a few turns of waiting for that critical land drop before bringing a massive threat on-line, and having to squeeze as much life out of your early soldiers as possible.

That said, there are a few midgame options: a Burrenton Bombardier (whose Reinforce ability makes him useful at most any point in the game), a Kor Hookmaster, and Scars preview card Kemba’s Skyguard at the three-spot, with a Celestial Crusader and Seasoned Marshal at the four. The Skyguard is intriguing mostly because it’s a new card- a 2/2 flyer for three with a bump of life isn’t all that impressive when compared with the Bombardier or even the Kor Aeronaut (though it will be a very strong card for SOM Limited).

The Marshal and Crusader are also choices that bear a closer look. The Marshal’s tap-when-attacking ability is very strong, but attached to a weak 2/2 body don’t expect to see it on the field for long. It’s probably a bit too expensive to be useful. The same cannot be said about the Celestial Crusader, whose Flash/Split Second combination of abilities- while intriguing- pale beside his best asset: buffing all other White creatures. Played right, it can be a very swingy combat trick, and should be used as such whenever possible.

The last five cards are where the decks bombs lie, and will be the focus of your later game after riding the Soldiers for as long as possible. The Conclave Equenaut and Conclave Phalanx are the weakest of the bunch- Convoke can help cheat them out earlier than anticipated (which goes some measure at plugging the hole the deck has in its midsection), but it’s no trivial cost: you’ve lost both attack and possible defense until your next Untap phase. The Angel of Salvation– the deck’s biggest beater- skirts this problem nicely- her Convoke is coupled with Flash, making her a very nasty combat surprise for your opponent (especially when factoring in her damage prevention).

With fully 17 of the deck’s 21 creatures being Soldiers (not even counting tokens), the Catapult Master’s special ability should be well within reach most times he hits the table. Though costly, it’s offset by the fact that you can activate it both at Instant-speed as well as with Soliders with summoning sickness. The Stormfront Riders, on the other hand, are a bit gimmicky. The deck has few creatures with ETB (enters-the-battlefield) effects, so it’s hard to maximise the drawback, but could be nice to pull back an obsolete Kithkin and use its Reinforce ability.

So Elspeth presents us with a tightly tribal White Weenie Soldier deck with the typical preconstructed mix of strong and weak creatures, but with some very solid synergies. Let’s look next to see how well they’re supported on the battlefield. 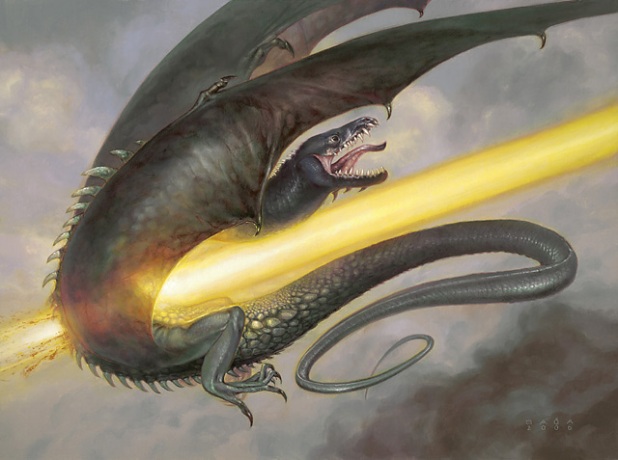 The short answer? Solidly! The deck boasts a well-rounded removal package. A Journey to Nowhere, a Sunlance, and a pair of the classic Swords to Plowshares will deal with most creatures, an Abolish smites an Artifact or an Enchantment, and the Saltblast is removal without effective limitation. Don’t be afraid to deploy them, but use them wisely- much of the creature removal you’ll be piloting will be behind combat tricks: Mighty Leap, two Raise the Alarms, a Razor Barrier, Blinding Beam and Swell of Courage. Another classic reprint with alternate art- Crusade– rounds out the noncreature spells.

The deck also packs in three nonbasic lands in addition to its raft of Plains. A Daru Encampment acts as a small pump for Soldiers, while the Kabira Crossroads gifts a small life bump. Finally, the Rare Kithkin land, Rustic Clachan gives you the flexibility of being another White mana source or instead Reinforcing one of your creatures.

As a whole, the deck’s mana curve looks like this:

As you can see, there’s a lot of careful playing that needs to go into this somewhat unconventional White Weenie deck. With few large creatures to get the job done quickly, Elspeth’s deck asks that you intead play careful and deliberate Magic (that’s not to say conservative, mind). Drop your arsenal of early beaters, then adapt as the conditions on the battlefield change. If your opponent achieves parity, or your attacks will no longer be profitable, it’s time to start building up a few “champions” from amongst your ranks with Reinforce, Crusade and Celestial Crusader. Alternately, there’s anough of an evasive punch here to permit you- with the right draws- to clog up the middle and send in flyers over the top for victory. Use your tricks wisely, such as using Razor Barrier on your strongest creature to get through for lethal, or take advantage of a failed alpha strike with Blinding Beam, to get in a couple such strikes of your own.

Fittingly, there’s enough moving pieces here to test even the most adept battlefield commander. And soon, it will be our turn to put the deck through its paces!

We’ll next be reviewing Tezzeret’s deck, then our concluding pair of columns will be from the perspective of taking each deck into battle. Join us then!