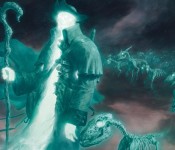 The original Innistrad released in September of 2011, and for the first time since Lorwyn/Shadowmoor in 2007-08 we had a fully tribal Magic set. Lorwyn’s tribes were sunnier, more whimsical in nature: Elves, Goblins, Giants, Kithkin and more painted an idyllic portrait of a world where the sun always shined; a world which took a turn for the dark once Shadowmoor arrived. Even then, however, it was more ‘dark faerie world’ rather than ‘Tales from the Darkside.’ It would take the arrival of Innistrad to bring a feeling of horror to Magic.

Innistrad presented us with a world under siege, of Humans hunted to the brink by the terrors of the night. Vampires, werewolves, zombies and more plagued the inhabitants of the world, and their angelic protector had mysteriously vanished. Cards dripping with top-down design infused the set with loads of flavor, and the Intro Pack decks that accompanied it did their part as well.

Fully three of the five were tribal in nature, with Carnival of Blood (Vampires), Repel the Dark (Humans), and- most importantly for today- Spectral Legions. Legions was a heavily Spirits-themed deck that looked to the air as its route to victory.

Don’t be fooled by the nautical-sounding name, Ghostly Tide is an updated version of that Innistrad deck, right down to the tribe.

Not Just a Feeling

The deck has a fairly similar mana curve to the previous deck we reviewed, Unearthed Secrets, in that it has a lack of one-drops, few two-drops, then spikes at the three-drop slot before tapering off again. That’s a deck that doesn’t need to get a lot going right away, but prefers to start building in the midgame. For Secrets, that was in order to give it time to assemble lots of Clues, which powered the deck. This time, it’s a more creature-centric stratagem, designed to amass an army of hard-to-block creatures.

The first on offer is the Seagraf Skaab, a humble two-drop 1/3 with no special abilities. This is clearly an inferior card when compared to the one that played a similar role in Secrets, the Erdwal Illuminator. Not only did that have flying, making it a tactical fit, but it was a Spirit making it a thematic one as well. Alas, the Illuminator’s rider ability probably doomed it, since having a card that interacted with investigate while having no investigate cards might leave some scratching their head. This Skaab is a capable ground blocker, and nothing more. You get two.

Next up is Rattlechains, an early rare. Rattlechains is a new tribal lord of sorts. It doesn’t provide any stats boost to your Spirits, but with flash you can cast it as an instant, and when it enters the battlefield you can give another Spirit hexproof for the turn. This is just the answer to an opponent’s removal card, but Rattlechains does more. While this card is in play, all of your Spirits can be cast as if they had flash as well, giving your deck a bit of whimsical unpredictability. With more than half your creatures being Spirits, there’s lots of opportunity for mischief- just the sort of thing Spirits excel at.

Moving on to the three-drops, we approach the spine of the deck. First is a pair of Dauntless Cathars, 3/2 Soldiers that can return as a 1/1 Spirit after they’ve died. While flavorful, neither half of this equation is all that compelling. More intriguing here is the Spectral Shepherd, a flying Spirit that can return other Spirits to your hand. This is not only inexpensive, but it doesn’t require the Shepherd to be untapped and can be used more than once per turn. Once you start having some mana open, this is a very strong addition.

Niblis of Dusk is a 2/1 flying Spirit with prowess, which has now become an evergreen ability as of Magic Origins. You get two of these, which are a straightforward workhorse card, as well as a Reckless Scholar. A reprint from Zendikar, this singleton Wizard lets you burn through your deck a little quicker to get the cards you need.

Next up leading the four-drops is the Apothecary Geist. This is another fairly pedestrian card, with fairly underwhelming stats and a fairly flavorful but underwhelming ability. If paying four mana for two power doesn’t make you feel great, you’ll be even less pleased with the Silent Observer. Feeble power aside, the Observer is a solid defensive card, able to block most of what your opponent can throw at you early in the game thanks to its 5 toughness. Clearly a buy-time card, one can be forgiven for looking at the crop of offerings thus far and wondering, buy time for what?

Finally, there’s a pair of Nearheath Chaplains. Similar to the previous Cathar, the Chaplain not only has more of an offensive punch (with lifelink, no less), but it also can return from the grave in the form of two 1/1 Spirits, much like the Mausoleum Guard from the original Innistrad.

Any hopes of finding some muscle at the top of the curve find little fulfillment. The Emissary of the Sleepless is a 2-power flier for five mana, which brings along a 1/1 Spirit token for the ride if something happened to have died that turn. Even optimized, that doesn’t seem like a play you’ll often get excited about. It’s fine to have creatures that dampen the effectiveness of the red zone with high toughness, but you typically expect that strategy to yield late-game payoffs. Ghostly Tide seems light on late-game punch.

The Stormrider Spirit is a little better, being a 3/3 flier with flash. That ambush quality and higher power helps make this a potentially lethal arrival for one of your opponent’s attacking creatures. You get two of these, and they are one of the deck’s better offerings. Finally, the deck’s foil premium rare arrives in the form of the Drogskol Cavalry. As a 4/4 it’s your most robust beater, though at seven mana it’s not a quick deployment.

So what do you get for that high investiture of mana? Well, besides a 4/4 evasive body, the Cavalry also gives you lifegain whenever another Spirit enters the battlefield. Conveniently, the Cavalry’s last ability lets you put a Spirit token on the battlefield for four mana. That’s a steep cost for a mere 1/1, but the fact that it’s repeatable and triggers the Cavalry’s ability make it a very solid mana sink at the end of the game.

Of course, the problem here is that lifegain in and of itself does very little to help you win a game. All it can do is buy you more time to win, without solving any of the issues that got you into a position to where you need more time to win in the first place. The 1/1 Spirit generation helps that somewhat, but like the rest of the deck there’s a concern that it just doesn’t do quite enough.

Let’s see if there’s any hope in the noncreature support suite.

To Heal and Protect

A bit of good news here- the removal suite is relatively decent. While some of it is conditional- the pair of Puncturing Lights not only have a power restriction, but the target must be committed to combat as well- overall you have a fairly wide range of targets. This synergizes well with a defensive deck, because the greater time afforded you in the red zone lets you be choosier. Put another way, with no defenses you often have to just kill what you can, hoping to slow the rush. Since you’re under less pressure in combat with a stalling or defensive deck, you can wait until your opponent starts bringing out more expensive threats before dropping the hammer.

While Silverstrike is also somewhat conditional, it doesn’t care how big (or small) the target is, making it easier and more effective than Puncturing Light. Of course it’s twice as expensive, but you do get a little dose of lifegain in the bargain as well. That’s it for your instant-speed options, though- the rest of the package are enchantments.

First up is Sleep Paralysis, your sole Blue removal card. This locks down one of your opponent’s creatures in a tapped state, which remains until they find a way to deal with it. The days of enchantment removal being a fairly staple inclusion in preconstructed decks are in the rearview mirror, meaning they’re almost always going to be permanent, well, permanents. The same goes for the pair of Bound by Moonsilvers. Although it doesn’t tap the creature, this still prevents them from participating in combat.

Unlike Sleep Paralysis, though, an affected creature can still use activated abilities that require tapping as part of their cost. Bound by Moonsilver more than makes up for that with its ability to change targets as needed, all but assuring that your opponent’s best creature will always be on lockdown. With the number of 1/1 Spirit tokens you’ll have floating around, the cost is barely noticeable.

The rest of the cards run a pretty wide spectrum. There’s an anti-creature bit of countermagic in Deny Existence, which might as well count towards removal in a pre-emptive sense. It also has the added benefit of exiling the target, so that your opponent can’t benefit from having the card in their graveyard- a sensible precaution in this environment where a number of cards have effects that can be activated there, or contribute towards delirium.

Not Forgotten plays in this space as well, whisking away a card from a graveyard and putting it back in the library. This offers a lot of options for you. For instance, you could pull back a particularly critical card (like removal) and put it back atop your library, ensuring you’ll get to draw it a second time. Alternately, you could put some garbage from your opponent’s graveyard back atop of theirs, denying them draw quality for a turn. This also helps shut off delirium if their deck is using that mechanic. Throw in the 1/1 Spirit token, and this is a very solid inclusion.

Vessel of Ephemera is a simple Spirit token generator in enchantment form. While one might wonder why it isn’t just a creature spell instead of an enchantment, there are two crucial reasons for this. First, it helps break up the payment into two chunks, letting you fill it in to your board when it’s convenient for you. Second, it’s a delirium enabler, offering an accessible way to get enchantments into the graveyard.

Catalog and Pore Over the Pages are card drawing options, with the latter also refunding you two mana (by untapping lands). Catalog- a reprint from Urza’s Saga- offers some advantage by being an instant, so it’s an easy play to make at the end of an opponent’s turn if you happen to have some mana up.

Then there’s Essence Flux, which is a touch of flicker with a twist. These sorts of effects- where you exile a creature and then return it- are often used to take advantage of enters-the-battlefield (ETB) effects. Those are fairly limited here, to lifegain (Drogskol Cavalry, Apothecary Geist) or offering a Spirit hexproof (Rattlechains). This means that flickering in Ghostly Tide is more reactive in nature. Want to save a creature from death? Want to ambush an attacker by defending with a creature that’s tapped? Both of these situations see Essence Flux at its best use, and if the target happens to be a Spirit, then so much the better.

Finally, there’s a copy of Chaplain’s Blessing. I’d like to say that this quite suboptimal card is here to balance out a strong deck, but this deck has actually been quite underwhelming. We’ll see how it plays out- any deck is capable of a few surprises- but this is the first offering I’ve seen since we’ve resumed that seems like a clear runt of the litter.