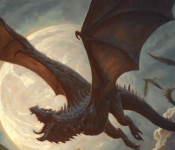 In the Autumn of 2010, Wizards of the Coast held a second talent search for new designers called, naturally enough, the Great Designer Search 2. Whereas the inaugural Search in 2006 was more mechanical in nature, there was a very deliberate emphasis on world-building for the second time around.

Contestants were instructed to form Wiki pages, and collaboration was an important aspect of the assignments. Although your humble author had no deep-rooted ambitions to go into game design, nevertheless as a longtime player of the game I gave it a shot.

I don’t recall much of the details, but my setting was a single palatial estate on the night of a murder mystery. A planeswalker had met with tragic misfortune (or had he…?), and if you’re thinking of the board game Clue, you’re not far wrong.

The signature mechanic of the set was the keyword action, sleuth. It was intended to convey the relentless search for information that would give you the edge over your rivals. When you played a card with sleuth, you’d essentially play a game of Go Fish with your opponent. You name a card type, you choose a card from their hand and reveal it, and if you guessed correctly, you drew a card. If you guessed incorrectly, you still had learned something about your opponent’s capabilities. And of course, the opponent could always play tricks of their own, or try to play with an empty hand to keep you off the trail.

This is, of course, why I run a site that has more in common with game development rather than game design, but it was fun and mined some tropes I thought had a lot of available space for Magic. Perhaps what I lacked in talent, I at least made up for in a little bit of vision, as we have arrived at Shadows over Innistrad, which features investigation as a central theme.

Of course, this is expressed much more elegantly in the core mechanic of today’s deck, Unearthed Secrets.

According to Mark Rosewater, investigate began- fittingly enough- as a top-down mechanic. The designers knew what sort of gameplay and feeling they wanted to invoke through the use of the mechanic, but what they didn’t know- not at first- was what the mechanic would do. As he explained…

We started by giving the mechanic a name. We wanted to call it “investigate.” What exactly would investigate do? Obviously it had to have some tie to card drawing. It helped out the first mechanical need above and it clearly matched the flavor. Investigating would led to more information (aka cards). We experimented with a number of mechanics…

One of these made it as far as development, before encountering some issues there. Dave Humpherys, the lead developer for Shadows over Innistrad, formed a mini-team to see about finding a replacement. They, too, tapped into the flavor of the plane for inspiration, coming to rest on the cluestones. Mysterious, oddly-shaped stone statues found on Innistrad, what mysterious might they contain if properly deciphered? 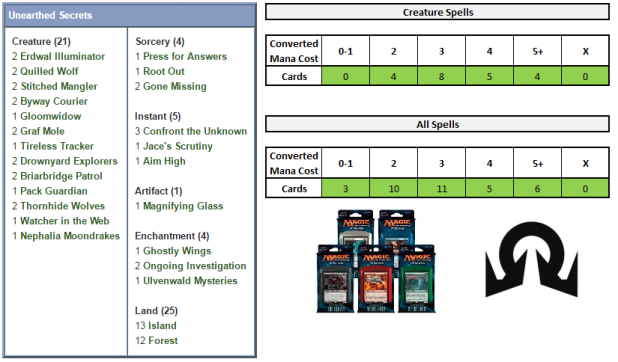 This deck is one that is quite comfortable with the longer game, given that so much of its focus hinges on being able to generate clue tokens, and those aren’t things you’ll be mass producing on turn 2.

However, there is a nifty trick in amongst the two-drops that will be like a shot of nitrous to the engine, and that’s the Erdwal Illuminator. As a creature, it passes the “vanilla test” made famous by the superlative Limited Resources podcast’s Marshall Sutcliffe. A two-mana 1/3 with flying is an excellent value, particularly for a deck that is happy slowing things down in the red zone. However, the Illuminator packs a very narrow extra punch: whenever you investigate for the first time each turn, you get to investigate again. With the right cards in play, those extra clues can add up relatively quickly, and the deck rightly gives you a pair of them.

Next up is the Quilled Wolf, another card well-positioned for longer games. Essentially a Grizzly Bears with a late-game mana sink that will turn them into a much more relevant 6/6 beater, this gives the Wolf at least some relevance at any point you draw them. As the cost is repeatable, on those rare games you find yourself with twelve mana laying fallow, you will at least have a 10/10 to help speed the game towards a conclusion.

The clue synergies run deep here. The Byway Courier basically has a morbid trigger that spawns a Clue upon its demise. 3 power is solid enough here, even if it’s a touch fragile on the back-end. You get two of these, as well as a pair of Graf Moles. These 2/4 “Mole Beasts” offer you some synergistic lifegain, depositing 3 life into your account whenever you sacrifice a Clue. Again that defensive-minded imbalance in stats favors the deck’s overall gameplay.

We also find the deck’s first rare in the Tireless Tracker. The Tracker lives up to its billing in two ways. First, it effectively has a landfall trigger that lets you investigate every time you play a land. That’s a good way to increase your Clue output, and the card would be playable here if that’s all it did. But there’s one more rider- it gets a +1/+1 counter whenever you pop a Clue as well. This can turn the Tracker into a closer-sized beatstick the longer the game goes on, playing right into the deck’s strengths.

The last few three-drops don’t synergize with the deck directly, but still have some use. The Gloomwidow is an economical 3/3 for three mana, and has reach– with a catch. It cannot block creatures that aren’t airborne. You also get a pair of Stitched Manglers, which act as a speedbump on your opponent by temporarily locking down one of their creatures. It’s not a permanent solution, but it buys you the gift of time.

Moving up a rung to the four-drops, we lead with a pair of Drownyard Explorers. Aside from their very ominous flavor text, these 2/4’s offer an investigation right as you cast them, then stick around to further congest the red zone. A pair of Briarbridge Patrols act as a recurring source of investigation under the right circumstances, which is whenever they damage a creature. On the offense, that forces your opponent to choose between damage or giving you a Clue. On defense, it’s a frequent Clue.

The Patrol has another trick up its sleeve, letting you play a creature for free if you’ve sacrificed three or more Clues. While you’ll find yourself wishing you had Progenitus in hand, here this isn’t meant to cheat out a large fattie (you really only have one creature with a brutal pricetag), but rather to offset the mana investiture required to pop three Clues in the first place. For that turn, you really can have your investigative cake and eat it, too.

Finally, there’s a singleton Pack Guardian. There’s a lot of value in this card, which offers you the opportunity to two-for-one your opponent. You can cast it as an ambush blocker to devour a smaller attacker, then pitch a superfluous land card to get another creature on the board. In a pinch, it can let you trade for a 6-toughness bruiser as well. The other upside to this card is it helps you get a land into your graveyard. Though this deck doesn’t care about activating delirium, it gives it some extra utility in a limited environment.

There aren’t a lot of five-drops in the deck, which might be a little surprising in a deck so delighted to play the long game, but the Watcher in the Web– which can block a total of eight creatures each combat. Though it’s unlikely to survive such a full engagement, it is possible with some of the deck’s other cards. In any event, that makes it effectively a Fog with teeth.

Speaking of teeth, a pair of Thornhide Wolves provide a bit of offensive punch in a deck that doesn’t have a lot on the front end. Finally, there’s the decks foil premium rare, the Nephalia Moondrakes. Collectively as strong as a full-fledged Dragon, the Moondrakes’ role is to act as closer. In addition to an evasive 5/5 body, they grant flying to another creature when they enter the battlefield. That’s not terrible even in this offensively-anemic deck, since evasion is evasion, but you don’t have a lot of great options to make optimal use of it. You’re certainly unlikely to have enough mana left over after casting the Moondrakes to pump your Quilled Wolf- or to do a whole lot else. Still, there’s a nifty one-shot ability of the Drakes to give your entire team flying if it ends up in the graveyard, so there’s one more shot to alpha strike even if you’ve lost the Drakes.

The noncreature support suite is like investigate gone mad- almost everything here advances that agenda of mystery. In addition to a group of purpose-specific cards, you also have the usual and customary gamut of “standard effect + new mechanic” present in every set.

You’ve got the Green instant-speed creature pump in Confront the Unknown (three of these), Blue power-nerfing in Jace’s Scrutiny, Blue creature-freezing in Press for Answers, and a Time Ebb effect for permanents with Gone Missing. Because of its relative simplicity, Root Out provides a great opportunity for comparison given how many cognates have been printed. Here are just a few to help illuminate the pattern of “destroy artifact/enchantment + bonus.”

Krosan Grip: the classic from Time Spiral, it has split second

Far from being an indicator of a thin design skeleton, seeing how Magic weaves a new set amongst the universal framework of the game is one of the enjoyable things to explore with each new set.

Moving on to the other investigate support cards, there’s a pair of Ongoing Investigations. These enchantments offer a Magpie-type effect to all of your creatures, giving you good incentive for nicking in early for damage through the red zone. Should any of your forward advance meet an untimely end, not to worry- the second ability of the card lets you exile a creature from the graveyard to investigate again!

Ulvenwald Mysteries offers a similar structure in Green. If any of your regular creatures dies, you get to investigate. Not only that, but whenever you pop a Clue you also get a 1/1 Soldier token in addition to the card drawn. The deck doesn’t offer a lot of purpose for a lowly 1/1 token, but more creatures doesn’t hurt, either.

Finally, if you like your investigation to be free of hoops and hurdles, it doesn’t come much cleaner than the Magnifying Glass. This mana artifact lets you buy a Clue token for four mana- no fuss, no muss. Got leftover mana at the end of the turn? Buy a Clue.

That leaves only two cards in the support suite that don’t directly interact with investigate. Aim High is a combat trick, a variant of in-world predecessors like Spidery Grasp and Snare the Skies. Although much better on defense given the ambush-blocker ability and reach, the stat boost is just as valuable in either direction.

Finally, Ghostly Wings is a simple aura that offers a modest stat boost, evasion, and the ability to yank the creature back to your hand at the cost of a card. It won’t be a card you typically get excited to draw, but thickening up one of your high-toughness creatures is a good way to keep it defensively relevant as the game goes on.

In contrast to most Intro Pack decks, there is no mana fixing here- all lands are basic lands. We’ll be taking the deck into battle soon, and return with the results. How will it fare?

Well, I guess that’ll just have to be a mystery…