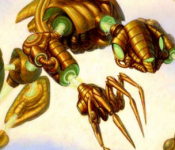 Modular is the name of the game as I prepare to take on Sam and playtest Transference. Certainly the ability to shift +1/+1 counters about is exactly the kind of “waste not, want not” strategy that can lead to victory, but how does the deck stack up? To find out, she shuffled up the White/Green Swarm & Slam.

Sam’s on the play for our opener, and leads with a Forest while I play an Island. Next turn she accelerates with a Gold Myr, which I meet with a Spincrusher. Back to Sam, she then deploys a Thunderstaff. With attacking pointless, I play an Island and end the turn.

Now turn 4, Sam summons a Viridian Shaman, smashing my Spincrusher. She then attacks for 1 with the Myr before passing. My turn is a blank. Sam then attacks in for 3 with the Myr and Shaman, activating the Thunderstaff to pile on 2 more points of damage. Down to 14, I then play a Skullclamp– somewhat ironically useless on an empty board.

Sam slams home for another 5 on turn 6, dropping me to 9. She then summons a Pteron Ghost. Back to me, I finally hit my fourth land drop with an Island, letting me summon a Cobalt Golem. It’s an able blocker that should buy me some time- all the more reason for Sam to then Purge it. She slams in for 7 after triggering her Thunderstaff, and I’m down to 2 life. It’s a complete dead end, and I scoop after the next draw.

I open up our second game with an Island, deploying an Arcbound Worker. Next turn, I attack in with it then drop a Skullclamp, swinging in with the Worker two more times until I offer it up to the Skullclamp to make my land drop on turn 4. Meanwhile, Sam’s not done a blessed thing aside from play land and a turn-4 Pteron Ghost.

Now turn 5, I miss my land drop but field an Arcbound Crusher. Sam flies in for 1 with the Ghost, then plays a Myr Matrix. Back to me, I then add an Arcbound Hybrid to the board, giving the Crusher a +1/+1 counter. I swing in with both for 4, dropping Sam to 13. For her part, Sam finds a Tel-Jilad Outrider, a creature that can stop my deck dead in its tracks.

Having to get clever and dig for answers, I equip the Skullclamp to my Arcbound Hybrid and send it in for 3. Sam obliges by killing it with the Outrider, letting me draw two cards while putting its +1/+1 counters onto the Arcbound Crusher thanks to modular. I then play a Vedalken Engineer, discarding a Voltaic Construct to get back down to seven cards. Sam follows up by attacking for 1 with the Ghost in the air, then making a 2/2 Myr token off the Matrix. She next summons a Gold Myr, then ends the turn. Over to me, I play an Arcbound Stinger, triggering the addition of a +1/+1 counter onto the Crusher. I then equip the Skullclamp to my Crusher, attacking in with it for 6. Sam gang-blocks with her Outriders and the 2/2 Myr token, but I Echoing Truth the token to whisk it away. This keeps my Crusher alive, and spills 5 points of splash damage over to Sam directly. Before passing I then deploy another Skullclamp, giving the Crusher a sixth +1/+1 counter. Sam counterattacks for 3 with her Ghost and Gold Myr, taking me to 14.

Now turn 9, I equip the second Skullclamp to the Crusher and send it in for 8. Sam makes a Myr from the Matrix, again pairing it with the Outrider to try and force a trade. Again I have an Echoing Truth, and tilt the exchange sharply in my favour. The Crusher runs over the Outrider with its trample, and just like that Sam is left at 1 life. Unable to stop the onslaught, she then concedes.

Sam leads with a Forest, while I open my account with an Arcbound Worker, then proceed with a Skullclamp next turn after a 1-point swing. Sam’s first non-land permanent touches down on turn 3 and it’s a Wirefly Hive. I then attack with the Worker, play an Arcbound Stinger, then equip the Skullclamp to the Worker. This kills it, of course, but it gets to transfer its modular +1/+1 counter to the Stinger even as it nets me cards. 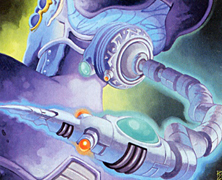 Now turn 4, Sam finds the Tel-Jilad Outrider, then passes the turn. I attack over it with the Stinger for 2, then play an Arcbound Crusher. Back to Sam, she swings in with the Outrider for 3, then plays Pulse of the Tangle for a 3/3 Beast. I next equip the Skullclamp to the Stinger- this time as a power boost- and return fire for 3. Then I summon a Spincrusher and second Skullclamp, adding two more counters to my Crusher and making Sam perhaps wish she’d waited a turn to play her Pulse.

Now turn 6, she sends in the Beast to hit me for 3, then summons a Pteron Ghost. I bring out a Cobalt Golem for another +1/+1 counter on the Crusher, then equip the Spincrusher with the Skullclamp. At the end of my turn, Sam attampts to generate a Wirefly but loses the coin flip. Her next turn is a blank outwith a land drop, so I next summon a Voltaic Construct. I then equip both Skullclamps to the Construct to draw four cards, and Sam again whiffs on a Wirefly attempt.

Sam’s turn 8 is another blank, lamentably for her. I play an Arcbound Fiend, then drop down a free Spire Golem. I stick a Skullclamp on the Crusher and turn it sideways for 8. Sam gang-blocks it with the Outrider and Beast to kill it. I then move seven +1/+1 counters onto my Spincrusher thanks to modular, and draw another two cards thanks to the Skullclamp. At this point, Sam knows the jig is up. She draws her next card, then concedes.

At its heart, Magic is a game of choices. The cards represent resources, but in the end they don’t play themselves. It’s up to the individual player to make the decisions that move a deck from an opening position to victory. In Mark Rosewater’s classic psychographical profile of Magic players, he ascribes the affinity for choices to the ‘Spike.’ The Spike is the competitive, tournament player who plays to win. Spikes tend to enjoy game states with lots of choices under the assumption that skill testing rewards the player with the greater skill. If the game was nothing except turning creatures sideways, generally speaking the player who drew their bigger creatures first would win. That scenario is anathema to the Spike, who enjoys cards that give him or her a chance to turn skill into percentage points towards victory.

I was very much reminded of this in playing Transference, which stuck a surprisingly intricate note over what seems like a fairly straightforward mechanic: when something dies, something else gets bigger. But time and again I had to decide how and where I wanted to put those counters, and it wasn’t always obvious. Did I try and concentrate the counters on one creature, in the hopes of presenting a threat of quality? Or did I instead try and attain threat diversity by spreading them about?

The presence of the Skullclamp certainly accelerated this, as the rewards for keeping the counters moving were tremendous- more cards! With a Skullclamp out I didn’t have to rely on my opponent obliging me with a favourable block to start consolidating power or shofting counters, but instead could begin to engineer the demise of my own creatures and therefore sculpt the battlefield as I saw fit. It was wickedly fun, for those of us who tend to enjoy the more intricate and nuanced strategies. If you’re a player who doesn’t like being handed losses when a deck doesn’t “come together” or “go off,” Transference might not be for you.

It certainly wasn’t without its drawbacks. For one thing, the deck’s mana curve was fairly high, with an uncomfortable concentration of four-drops. Modular felt like a mechanic that really wanted you to curve out tightly, like Allies, Slivers, or the Simic’s evolve does. Instead, we get a deck that has as many four-drops as it does one- and two-drops combined, and that makes for some serious hand congestion. Some of these are superb, like the Arcbound Crusher. Others, however, are more like the Voltaic Construct and Cobalt Golem, though at least the latter has the virtue of being able to gain evasion.

Given the preponderance of more expensive cards you’d expect to see a solid ramp suite, and the deck’s ramp suite of an Ur-Golem’s Eye and Vedalken Engineers is serviceable if not flashy. Some mana Myr would not have been out of place, though, and the deck was even more miserly on removal. Altogether this seemed like a deck that had a great deal of promise that it didn’t live up to, but was still capable of some very enjoyable play. Modular was well represented, but probably didn’t get its due.

Misses: Bloated curve on the back-end with a glut of four-drops in a deck that only has twenty-three land; lackluster removal suite

Read more from Darksteel, Mirrodin Block
← 2007-08 Precon Championships: Round 2 and the Leaderboard
Announcing the Winner of the Gatecrash Meddling Giveaway! →
10 Comments Post a comment