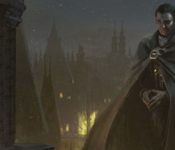 The Boros are back, this time in the role of foil in the capable hands of Jimi. Meanwhile, I’ll be piloting the shadowy DImir Dementia, as we look to give it a thorough stress test to see how well Blue/Black cipher-mill holds up!

After swapping opening land drops, Jimi opens her account with Wojek Halberdiers, while I simply play a Dimir Guildgate and pass. A next-turn Skyknight Legionnaire sees Jimi get out in front quickly, attacking for 5 with both creatures to leave me a quarter-dead. For my part, I summon a Sage’s Row Denizen.

Now turn 4, Jimi attacks for another 5, and to her surprise I accept the trade of the Denizen for the Halberdiers. That leaves me taking 2 from the Legionnaire, going down to 13. She replaces her loss with a Canyon Minotaur and passes. Back to me, I play a Dimir Keyrune, using it to fund a Wight of Precinct Six– which immediately is a 2/2 thanks to the fallen Halberdiers. Next turn, Jimi attacks for 5 unopposed, as I go down to 8. I counterattack for 2 with the Wight, then expand my board with a Mindeye Drake and Jace’s Phantasm.

Jimi leads off turn 6 with a Warclamp Mastiff, then takes my Drake for a ride with an Act of Treason. Attacking for 7, I chump the Minotaur with my Phantasm to limit the incoming damage, ending at 4 life. My turn, sadly, is a blank. When Jimi then summons a Foundry Champion, it’s 4-point blast is all she needs to claim the opener.

The first play of the game outwith landdrops is my second-turn Gutter Skulk, which Jimi meets with a Daring Skyjek. Next turn I send the Skulk through for damage, then summon the Wight of Precinct Six. For Jimi’s part, she adds a Skyknight Legionnaire, sending it into the red zone for an attack while holding back her Skyjek. This brings us level at 18 apiece.

Now turn 4, I send the Skulk through again, and Jimi once more declines the block. I then follow with a Balustrade Spy, grinding Jimi’s library. Luckily for her, the first card turned over is a Mountain, so that’s where it ends. For her part, she summons a Bomber Corps and passes. Back to me, I play Coerced Confession, seeing two creatures off to Jimi’s graveyard from her library. This not only lets me draw two cards, but it pumps the Wight into a 3/3. Unwilling to give me the gift of time, Jimi then attacks with all three of her creatures, triggering battalion and sending the Bomber Corps’ ping directly to the face. I block the Corps with the Skulk, then block the Legionnaire with my Spy drawing an Arrows of Justice to blast it from the sky. Jimi clearly had been hoping to draw my Wight into a blocking assignment while it was still of a manageable size, and seems almost tilted that she didn’t. Still, it’s a successful attack, as I’m now down to 14.

I counterattack with the Wight and Skulk on turn 6 for 6, dropping Jimi to 10. For her part, she plays a Mountain and passes, preferring to hang back on defense. I send in the Skulk for 2 alone, then add a Dimir Keyrune. Jimi bolsters her population with a Warclamp Mastiff.

Now turn 8, I send in the expendable Rat once more, and Jimi declines a trade going to 6 as a result. I then add a Deathcult Rogue. It’s not long for the world, though, as Jimi immediately solves it with a Mugging. Next turn, I activate the Keyrune to attack for 4 alongside the Rat. The Keyrune is unblockable, but Jimi’s forced to chump the Skulk with her Mastiff- making the Wight a 5/5. Down to 4 life, she plays a Boros Keyrune and passes.

A turn-10 Death’s Approach kills the Legionnaire, while Jimi’s Skyjek then ends up Totally Lost. With no blockers, a lethal attack is inescapable.

Jimi’s back on the play for our final game, and she opens with a Warclamp Mastiff which gets in for damage on turn 2. My first play is the Gutter Skulk, plugging that defensive hole.

Now turn 3, Jimi counters with a Skyknight Legionnaire, attacking in with it for 2. For my part, I summon a Mortus Strider and pass back. After another attack in the air I can do nothing about, Jimi then summons her Warmind Infantry. Aside from a Swamp, my turn is a blank.

Jimi finds a Boros Guildgate on turn 5, but aside from the Legionnaire opts to keep her creatures at home. Down to 13, I play a Swamp and pass. Next turn, Jimi drops me to 11 in the sky before adding a second Warmind Infantry, after which I unleash a Dinrova Horror. This bounces one of her Infantries to hand, then compels her to discard. She has a few cards to choose from, though, and ends up dumping a Shielded Passage.

Now turn 7, the Legionnaire continues its grim work on my spindown life counter, seeing me down to 9. She then replays the Warmind Infantry, adding a Firefist Striker for good measure. Over to me, I play Paranoid Delusions to mill Jimi for three, then ‘encode’ it onto my Horror thanks to cipher. Then I summon a Consuming Aberration (a 4/4), and pass the turn.

Next turn sees Jimi use Mugging to falter my Horror, rendering it damaged and unable to block. She then attacks with everything, triggering battalion. The Striker falters my Gutter Skulk, clearly signaling that she’d love to see my Aberration committed to defense. Sadly, I dont have a lot of choice in the matter. I chump a Warmind Infantry with my Strider, which returns to hand, and I block the Striker with the Aberration. Naturally, this draws an Arrows of Justice. Thanks to her having casted Mugging, though, the Aberration is a 5/5, meaning even with the Arrows it still manages to kill Jimi’s Striker as it dies. For all that, I’m left at 2 life. Desperate for an answer but knowing Im not likely to find one against these odds, I cast Whispering Madness. This helps Jimi more than me, since I discard three cards to her one, but we both re-draw three. I then encode it onto the Horror and attack with it for 4. The first damage she’s taken, Jimi falls to 16, then both encoded spells trigger. The Paranoid Delusions mills another three cards, while we each pitch our hands and re-draw three more cards from the Madness. Sadly, nothing promising turns up, and I concede the game and the match.

It’s always a good sign when you have a blast with a deck, even in defeat. Though Jimi’s righteous do-gooders in the Boros Legion put paid to my plans for domination of Ravnica, this was the most fun match-up we’ve had yet. Dimir Dementia works, and it’s a thrill ride of a deck if you enjoy the challenge of an alternate win condition. In fairness, the deck more than hedges its bets by packing in more conventional threats (like the 35/35 Consuming Aberration I was able to assemble in our pregame friendly), and actual mill-out wins will be fairly uncommon. Credit the deck for giving you the opportunity for both paths to victory, without one precluding the other.

That’s a central point of the deck, the idea that moving forward with one tactic actually helps advance the other. Successfully milling your opponent has benefits in your creature army, as with the Aberration as well as the Wight of Precinct Six. Meanwhile, deploying a number of your creatures in return helps advance the milling aim, either with a creature that has the ability to do so directly (such as the Vedalken Entrancer or Balustrade Spy), or by using Paranoid Delusions on one of your evasive creatures, like the Incursion Specialist or Deathcult Rogue.

These examples suggest a bedrock of smaller interactions between cards that offer tremendous synergy, and at times the deck hs little moments of interactive discovery that are reminiscent of making connections between cards in a Duel Deck. For instance, realising that cipher lets you cast a copy of the spell makes the Aberration’s mill trigger just that much more potent. We’re always excited to see decks that offer a little more than the plain “cast creatures and turn them sideways” strategy, decks that offer a little subtlety and nuance. Though it’s unlikely we’ll ever see Theme Deck levels of complexity in this level of product, such as the ridiculously intricate Beyond the Grave from Coldsnap, Dimir Dementia is as good as it gets here.

In comparison to what it gets right, the slights against the deck almost seem petty. The noncreature spells were a bit of a mixed bag and somewhat pricey, but it’s hard to take the removal suite to task- conditional as it is- because of how well it ties into the deck’s central theme. Although we’re in the middle of our reviews for Gatecrash, it will be a high bar for any of our final two decks if they want to displace the Dimir for claiming best in set distinction.

Hits: Superb synergistic overlay between its two victory conditions (conventional creature kill, milling); good mix of evasive creatures; reasonable mana curve; “grind” mechanic offers an added level of fun thanks to its unpredictability (similar to what made cascade a lot of fun)

Misses: Deck can struggle to get its engine together if it finds the wrong parts early on, falling behind while struggling to catch up; cipher sadly underrepresented