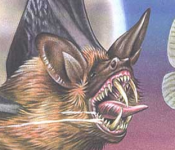 With the Mountains and Forests now having been explored, it’s time for us to descend into the Swamps… to Dakmor! For therein lurks Tojira, the Swamp Queen, and her wicked minions, the Nightstalkers. Looking to defeat them is Sam, who’s wielding the mono-Blue Spellweaver. Can she survive the perils of the marsh?

Sam’s on the play for our opener, and we both use our first turn for land drops. Next turn she adds a Talas Scout, which I answer with a Lurking Nightstalker. She swings in on turn 3 with the Scout for the match’s first blood, then adds a Talas Merchant. I attack in with the Lurking Nightstalker, and Sam accepts the trade of creatures. I then deploy a Dakmor Bat and pass.

Now turn 4, Sam again sends in the Scout for a 1-point peck before adding a Talas Explorer, getting a free look at my hand. Back to me, I counterattack with the Bat for my first nick of damage, then summon an Abyssal Nightstalker. Unafraid, Sam keeps up the pressure in the air when she sends in both fliers next turn for 2, bringing out an Apprentice Sorcerer for backup defense. I go all in for 3, and Sam obligingly shoves her Sorcerer in front of my Nightstalker to prevent herself from having to discard. I then add a Nightstalker Engine and end my turn.

A similar turn plays out for Sam’s turn 6, when she attacks for 2 in the air and summons an Apprentice Sorcerer. This time I add the Engine to my offensive commitment, and again Sam uses the Sorcerer to block the Abyssal. After she goes down to 16, I take a 3-point hit for an Ancient Craving, letting me refill my hand. I drop a freshly-drawn Swamp, and use it to help summon a Lurking Nightstalker before passing. Next turn Sam sends in the Explorer for 1, but holds the Scout back. I press on, surging in for 6 with the Lurking, Abyssal, and Engine. Sam chumps with the Scout to block the Abyssal, and goes down to 12. I then add another Lurking Nightstalker, then try for a Prowling one. A reach too far, Sam simply counters it with a Mystic Denial.

Again we open with land drops, after which Sam opens her account with a Talas Explorer. I answer as before with a Lurking Nightstalker, and we’re off to the races.

A turn-3 Talas Scout again lets Sam get a good look at my hand, after a 1-point swing in the air from the Explorer. I double  down on the Lurking Nightstalkers with a second one, after holding fire for a turn. Back to Sam, she sends in both of her aerial options for 2 to put me to 17, then adds another Talas Scout. I crush it with a Hand of Death, clearing the way for both of my Lurkers to slink in for 6.

Now turn 5, Sam again commits to the air war for 2, then reinforces her defenses with a Talas Explorer. Back to me, I again send in both of my Nightstalkers, and Sam predictably accepts the exchange for one of them. That puts her down to 14, and I replace my loss with a Prowling Nightstalker. Back to Sam, she attacks for 1 this time with the Explorer, then refills her hand with a Touch of Brilliance. I counterattack for 2 with the Prowling Nightstalker, then follow suit with an Ancient Craving, going down to 11.

Now turn 7, Sam attacks with the Explorer for 1 and passes turn. I counterattack for 2 with the Prowling Nightstalker, leaving her at 7. I then draw out a counter (a Mystic Denial) with a Mind Rot. I content myself with a Dakmor Bat and end my turn. Back to Sam, she finds her big bad in the form of an Air Elemental after again flitting in for 1 in the air. With both of us in single-digits of life, it’s a race to the finish. I begin with a Brutal Nightstalker forcing the discard of a surplus-to-requirements Island, then follow up with a Cruel Edict to claim her Explorer. I next swing in for 2 with my Prowling Nightstalker to put her to 5.

The game is Sam’s to win, though, unless I can find some removal for that Elemental. She sends it in for 4, and I chump with my Bat. She then checkmates me with a second Elemental. After drawing nothing, I scoop.

The third game opens much the same as the others- early land drops followed by a game-opening aerial body in the form of a Talas Explorer on turn 2. The peek at my hand raises her eyebrows. “Nice draw,” she says, handing me back my cards. She immediately begins rifling through her own, expecting- and receiving- a turn-3 Mind Rot. First blood goes to her, though, as she swings in for 1 before adding a Talas Scout.

Now turn 4, I play a Prowling Nightstalker and pass, while Sam keeps up the beats for 2 to put me at 17. Back to me, I attack with the Nightstalker for 2, then summon a Raiding Nightstalker beside it. It’s not my first option, but her open mana tells me to keep my powder dry for a little longer. For her part, Sam again swings in in the air, then recovers from the discard with a Touch of Brilliance.

Now turn 6, I send in both Nightstalkers for 4, and with Sam largely tapped out I go ahead and summon the Brutal Nightstalker, forcing a discard (an Apprentice Sorcerer). Back to Sam, she attacks again for 2 and plays a Talas Scout. She then braces for impact as I attack for 7 with my trio of beaters, cutting her in half. I next summon a Lurking Nightstalker and pass. Sam surprises me when she attacks with her Scout and Explorer, but when she follows on with an Exhaustion it makes sense. That catches me with a trio of creatures and pair of lands tapped, though I’m far from helpless.

Back to me, I hammer her hand again with another Mind Rot. With only three cards in hand, her loss is painful- a Mystic Denial and False Summoning. I send in my Lurking Nightstalker, and Sam trades it with her hangback Scout. Next turn, she desperately tries to stabilise with an Air Elemental, but this game belongs to me. I crush it with a Predatory Nightstalker, then take her Explorer for good measure with a Cruel Edict. In go the ground forces, and Sam’s reduced to 2 life. After her next draw, she concedes the match.

Return of the Nightstalkers

Although we’re only 60% through reviewing Portal Second Age, it’s hard to think we haven’t found our best in breed in The Nightstalkers. This is a strong deck, well-put together with a pleasing tribal theme and some great support cards. Indeed, as I played it it was hard to shake the feeling that it wasn’t a ‘normal’ Theme Deck. Both Goblin Fire and Nature’s Assault felt like watered-down versions of the usual archetypes, but The Nightstalkers felt like a mature, full-fledged construction.

Much of this was due to the creatures. Unlike the other decks which had no shortage of vanilla, every creature here (arguably outwith the Dakmor Bat) had something going on besides just having a power and toughness. Some got stronger on the attack, some were evasive, and a couple had very useful enters-the-battlefield abilities. All of them supported an aggressive, creature-based strategy of attack and disruption.

Add to that a very solid noncreature supporting suite of removal and discard, as well as the hail-Mary Return of the Nightstalkers– and you have one surprisingly good deck. Overall, it was a blast to play, and will set a very high bar for the remaining two.

Hits: Very solid creature curve, with a concentration of options in the midgame; commendable focus on removal and disruption supported both by creatures and noncreatures; genuine tribal feel a welcome bonus; feels like an Expert-level deck instead of an introductory-level one

Misses: Added abilities of the creatures means they’re attached to smaller bodies, and without recourse to removal are susceptible to stalling out against a more robust or aggressive opponent