2011-12 Precon Championships: Round 8 and the Leaderboard 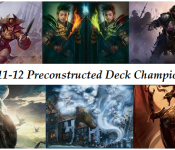 Only two weeks remain until the 2011-12 Preconstructed Championships draw to a close with the crowning of a winner, and this past weekend saw us move one step closer to seeing a victor in the last of the four divisions, the Lauer. An Intro-Pack-heavy field went to battle with a pair of premium decks, and at the end of it only four emerged from the fray.

The opener was a fratricidal battle of Intro Packs from Avacyn Restored, with the aggressively-minded Fiery Dawn looking to topple the Angels of Angelic Dawn. Two-thirds of our predictors gave the nod to the latter, and were rewarded with a point. Said top-of-table favourite Jenesis, “Boros might come flying out of the gate in one or two games, but it will be the flying Angels that carry the day.”

Next it was Nicol Bolas’s turn in the pit, as his Duel Deck was put to the test against Dark Ascension’s Dark Sacrifice. Most had Bolas taking it at a canter, but Dark Sacrifice was the little deck that could! Jay Chong was one of the few who had faith in the White/Black deck, focusing less on its own strengths and more on the Dragon’s weaknesses. “Although Bolas has lots of removal, the mana base will hobble the dragon.” Indeed it was to be the surprise upset of the day, and Dark Sacrifice advances!

Far less in doubt was the fate of the Avacyn Restored Event Deck, Humanity’s Vengeance. Support of the deck was near unanimous as almost nobody saw any hope for Relentless Dead. “Zombies are good,” opined mcc1701, “but not event deck good.” outhouseinferno took a flavourful approach, saying “spoiler alert: the humans win in the third set.” Now the sole claimant to the divisional favourite, there may not be much that can stop it!

For the final match, Grave Power from Dark Ascension took on Magic 2012’s Mystical Might. Another surprise, about one-third of the Predictors had faith in the Blue/White deck to advance. Joked Icehawk7, “because when their powers combine, here comes Captain Planet!” The joke was on Grave Power, however, as the deck just couldn’t string together enough cards to find the victory it so desperately sought.

Turning now to the Prediction League, we find Jenesis still holding on to a slim lead, but having put a little more room between herself and the pack behind her. Euphet and outhouseinferno are hot on the heels, but with six more points to play for the prize package is still very much up for grabs. Here’s how the updated table looks:

As for those final six points, well, three of them will be up for grabs this Saturday as the Lauer Division concludes. For those participating in the League, we’ll want predictions for each of the three following matches in the comments of this thread:

Who will win Games 23 and 24, then go on to claim Game 28 and the right to contest the Forsythe Conference? We’ll find out this Saturday! Good luck to all predictors.