As mentioned in our previous review, Portal Second Age followed a year later in the footsteps of Portal, which was designed as an introductory-level product for entry to the game. In an effort to bridge the gap between “Magic: the Gathering” and all other games, Portal’s designers stripped away much of the creative trappings that gave the game much of its flavour.

The library, for example, was the “deck,” while the graveyard became the “discard pile.” Blocking was out, and instead we had “intercept.” This went hand-in-glove with some design elements that helped limit some of the game’s complexity. Portal- and Portal Second Age- contained only three types of cards: lands, creatures, and sorceries. Furthermore, none of the creatures had static effects that might be overlooked by the novice player. Instead, creatures with special abilities had them on triggers, which increased their visibility through top-of-mind awareness.

When designing Portal Second Age, R&D determined that they could safely move a little bit closer to Magic to help players transition from the beginner game to the more advanced one without them having to translate concepts and terminology. Back were blockers, libraries, and graveyards. Lastly, there was one final innovation that would soon ripple throughout all of Magic itself. The original Portal ignored distinctive creature types altogether in an effort to keep things as simple as possible. Every creature in the original set simply had “Summon Creature” in their type line. With Portal Second Age, that changed as well, and it set a standard that would become the default for the game as a whole. Whereas previously cards would read “Summon” on them before the creature type (ie Summon Goblin), now they would read “Creature – Goblin.” With 1999’s Urza’s Destiny, this Portal-piloted templating was adopted wholesale, and has remained in place ever since.

That wasn’t the only enduring thing that Portal Second Age was notable for, though it fits in nicely with our “Year of Firsts” theme this year. As it happens, there is something the set is much more notorious for, and we’ll be looking at that when we crack open the next deck. For now, we turn our attentions to the mono-Green Nature’s Assault. 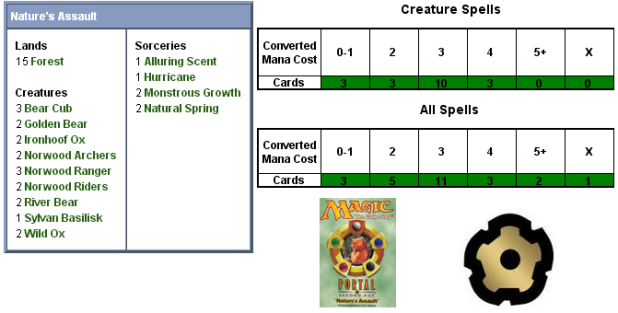 Like the other Portal Second Age decks, Nature’s Assault is in essence a simplified version of a standard archetype- in this case, Green fatties. In this case, it’s not just simplified- it’s also reduced in stature. The standard-issue Green fatty deck uses mana acceleration to bring large creatures on-line at around the same time your opponent is playing its midrange cards. With a high concentration of creatures, the Green deck then just swarms the board with expensive beaters, relentlessly attacking until the game is won.

Nature’s Assault has similar ambition  but is hampered by one inconvenient omission: zero ramp. That’s right, there’s not a single card here that helps you ramp, despite the set having been printed with one (Nature’s Lore). As a result, Nature’s Assault tries to cut its cloth accordingly, with only three creatures that cost five or more mana and a number of low-cost, early options.

Unfortunately, not many of these are particularly sexy, especially in the colour that’s supposed to have the best creatures. You won’t be all that happy to draw a Norwood Ranger much of the time, but the deck packs a trio of them and they can help blunt an early rush of 1/1’s. The same can be said of the three Bear Cubs. These are serviceable workhorses, but won’t inspire all that much passion from all but the most stalwart Green mage.

Want more Bears? Nature’s Assault has you covered! Moving on to the four-drops, we find a pair of vanilla Golden Bears. Trading in a point of power, the River Bears are about as evasive as it gets for the deck, with islandwalk punishing any opponent playing Blue. Are they playing Black instead? No problem, the Wild Ox has got your back!

From there we find a little more intricacy with some special-ability creatures. The Norwood Archers have reach, and are another four-mana 3/3. Meanwhile, the Norwood Riders deny your opponent the ability to gang-block them. Also a 3/3, this is a deck that begins to come alive as early as turn 4, and begin dropping threats onto the battlefield faster than your opponent can deal with them.

Rounding out the top of the curve we find another pair of Oxen, these of the Ironhoof variety. The deck’s largest creature at a mighty 4/4, the Ox shares the same blocking restrictions for your opponent that the Norwood Riders had. With a 4/4 being one of the largest creatures in any of the five Portal Second Age decks, this Ox will be deceptively difficult for your opponent to manage since they can’t trade up a pair of weaker, redundant creatures of their own.

Finaly, the deck’s first rare checks in with the Sylvan Basilisk. The Basilisk is unkillable in combat, since anything that blocks it is destroyed before combat damage is dealt. If they can’t find a spell to solve it, your opponent is simply going to have to try and pile so uch pressure on you that you’re forced to use it in defense, where its special ability is inert.

For noncreature support, your options here are fairly limited given the number of card slots devoted to creatures. You get the usual ‘combat trick’ in the form of a pair of Monstrous Growths, though their sorcery speed prevents them from offering much in the way of trickery. You also get a touch of lifegain from Natural Spring, to heal up any injuries you sustained on your way to board domination.

We find the deck’s final two rares here as well. An Alluring Scent is a combo card that pairs perfectly with your Basilisk, recreating the old Lure/Thicket Basilisk trick from the game’s earliest days. You also have recourse to a Hurricane here, another classic staple. these give some utility to the Natural Springs, letting you get ahead on life before tapping out to end the game with a massive Hurricane. It’s also a fine answer to one of Green’s classic problems- evasive creatures.

On the whole it’s hard to get a read on this deck, as we don’t want to prejudge it harshly. The heavy vanilla content and low level of complexity make for a solid deck for beginners, but Goblin Fire seemed to manage the divide of having something for the new and the old all at once that seems absent here. Still, you never know until you play! We’ll be back in two days with a full report.