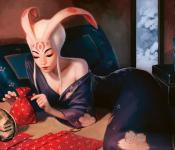 As you might have noticed, weve been awash in contests as of late. We beg your indulgence for the delay, but we’re excited to announce the winners for two of them, the Kaijudo and Onslaught giveaways!

Both of these were structured as comment contests, one of our favourite methods for giveaways since the site gets so much from your comments, insights, and conversation. The first contest was for a copy of Onslaught’s Ivory Doom, a Black/White tribal Cleric deck. We ranked up the random number generator, and Limbonic_Art is our winner!

Meanwhile, we also had a giveaway for a fistful of Kaijudo boosters for one lucky reader of our Bull Rush coverage. Again we kicked off the number generator, and wouldn’t you know it, Varo’s number appeared!

Congratulations to you both, and thank you as ever to everyone who participated. We’ll be in touch to get mailing addresses, and we’ll get these in the post as soon as possible.

For those who didn’t win, don’t worry. We still have the Return to Ravnica Meddling contest going on for the series on Gathering Magic as well as the prize package for the Preconstructed Championships- and this coming holiday season as usual we’ll be giving away something extra special. Magic for everybody!