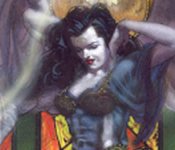 If you looked carefully at our review of Tombstone, you might have noticed a tiny wee fib embedded in the review. Like the best fibs, the degree of veracity largely depended upon your perspective, but this was more of the kind of fib that’s more of an incomplete rendering of the truth rather than any factual inaccuracy. In the review, we called Urza’s Saga “something of an ‘enchantments matter’ set.”

That’s largely true, as indeed there are a great many enchantments in the set as well as cards that interact with them. But what often gets overlooked is that Urza’s Saga really was an ‘enchantments matter’ set, just as Lorwyn was a ‘tribes matter’ and Zendikar a ‘lands matter.’ Why is it, then, that it so infrequently is remembered as such?

As it happens, while Urza’s Saga was in the design phase, the creative team decided instead that the set was going to focus on Urza and artifacts. The designers held firm, so a sort of compromise was reached. The designers would get their enchantments set, but it would be glossed as “The Artifact Cycle.” For their part, the designers of the set then went about including a number of artifacts and “artifacts matters” cards as well, so in essence, enchantments were forced to time-share with the card type that many revisionists of the game recommend it should be merged with altogether.

By and large, the enchantments tended to pass muster, and in a cruel twist of fate it would be the artifacts that caused many more headaches for the game. All told, there have been sixteen different cards from Urza’s Saga banned from sanctioned Magic in one form or another- none of these were enchantments or enchantment-focused. We’ll be looking at what went wrong with the set in our next review, but for the now we’d like to pause the tale here and look a little more closely at this unheralded aspect of the set’s design- enchantments matter.

Urza’s Saga introduced five new mechanical elements to the game of Magic. One of these, cycling, we covered in our review of the game’s first-ever three-colour Theme Deck, Tombstone (another first!). Beyond that, the set also gave us ‘free’ spells (another Wizards nightmare), echo, ‘growing’ enchantments, and ‘sleeping’ enchantments. It is the last of these that forms the basis of the Sleeper deck, though the ‘growing’ theme also makes an appearance.

Growing permanents- for they weren’t actually limited to enchantments- were simply that- permanents that grew more potent the longer they were left out on the battlefield. Present in all five colours as well as artifacts, there were a small number of them at uncommon, but by and large these were restricted to the highest rarity (at that time, at least). Take, for instance, Discordant Dirge. A five-mana Black enchantment, each upkeep the Dirge let you put a “verse counter” on it. Then, when you were ready to pop it, you could trade it in to potentially devastate your opponent’s hand, looking at their cards and compelling them to discard a number of them equal to the amount of verse counters you’d stuck to the Dirge before cracking it. Although one of these permanents, Smokestack, would chart a much greater longevity than the others thanks to its use in a legacy deck archetype (Stax), Sleeper would at least immortalise another of them for posterity’s sake in the artifact Barrin’s Codex, one of the deck’s two rares.

The other innovation on the plate for today is much more localised in nature, being limited to enchantments. Sleeping enchantments were those that were brought into play as enchantments, but could then transform into creatures if the right situations presented itself. Much like the traps of Zendikar, most of these conditions involved your opponent doing something, though one of them could see its condition triggered by any player (Veiled Crocodile) while another was strictly voluntary (Lurking Evil). Notably, this was a mechanic given almost entirely to “Bant” colours (White, Blue, and Green), as the Lurking Evil is Black’s sole representative of the species and Red was given none at all.

As both types began mining a fairly rich vein of design space, it’s no surprise that we’d see more of both types returning later in the game. Note, for instance, the card Halcyon Glaze in Ravnica, which was cut of a very similar cloth, or the Shrine cycle from New Phyrexia. Undoubtedly, we’ll see many more.

Sleeper, then, is built adding this new wrinkle to a very familiar strategy: White Weenie. The question the deck looks to answer is, what if we built an aggressively-minded White Weenie deck, then layered on some sleeping enchantments to keep the opponent in check? It’s an intriguing prospect, though we were similarly intrigued (and subsequently disappointed) by Tombstone’s twist on the reanimator strategy. Let’s see how the deck breaks down.

Harvest the Crop of Wisdom 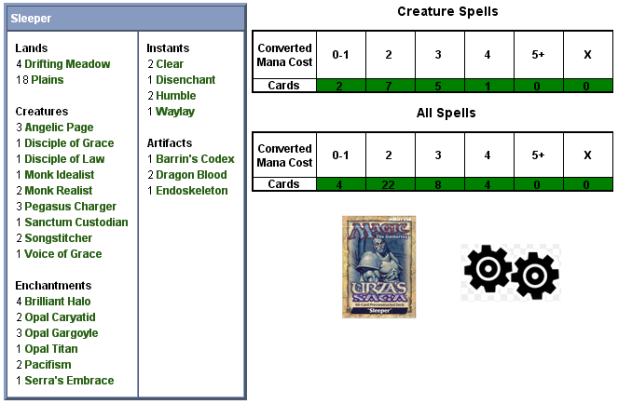 The White Weenie shell of the deck is one that is almost immediately recognisable from a certain era- a number of small, cheap creatures supported by other creatures that bring along combat trickery and influence (see, for example, 9th Edition’s Army of Justice for an example of a mono-White deck built entirely along that axis). The most expensive creature here is a four-drop, and the deck brings along only one of those.

It begins with a pair of Songstitchers, one-drops that have a largely conditional but occasionally useful ability to Fog a single flying attacker. There aren’t a lot of flying creatures in the Theme Deck environment here, though there are a few. Undeterred, the deck is more than happy to bring along a few of its own. The Angelic Page is a 1/1 with evasion, and the first example of a card that can unbalance the often delicate calculus of creature combat by being able to buff any creature at instant speed. That it’s an important element of the deck is borne out by the fact that you get three of them at your disposal.

Next up is a pair of Monk Realists, a somewhat unfortunate choice given the absence of an optional trigger. Since you must destroy an enchantment if one is in play when you summon them, these can sit in your hand uselessly if your opponent isn’t playing any, lest you be compelled to destroy one of your own. That said, there are some times you’ll be delighted to find them, as each of the Urza’s Saga decks packs at least a few enchantments worth removing. The final two creatures in the two-drop slot are a matched pair, the Disciple of Law and Disciple of Grace. Each of these have protection against one of White’s enemy colours, and can be cycled away if unneeded.

A trio of Pegasus Chargers lead us into the three-drops, bolstering our air force quite considerably thanks to their first strike capability. There’s also the philosophical opposite of the Monk Realist here in the Monk Idealist, which returns an enchantment card from your graveyard to your hand- a very solid ability here given how many you’ll be playing. Finally, there’s a healer in the Sanctum Guardian, which taps to prevent two damage to any target. This is another way that the White Weenie shell can punch above its weight against an opponent managing to field larger creatures.

Lastly, we find a single copy of the Voice of Grace here, offering another dose of protection from Black. A four-mana 2/2 with flying, she’s a little less exciting when you’re playing a deck that doesn’t have so much as a single Swamp to its name, and unlike her junior sibling the Disciple of Grace she doesn’t have cycling to fish for something better.

Supplementing the White Weenie core, Sleeper offers a further half-dozen creatures masquerading as enchantments. All of the sleeping enchantments here share two characteristics. First, as creatures, they’re undercosted, balancing the drawback of not having them immediately available as actual creatures. Second, they’re triggered by an opponent playing a creatuere of their own. This gives them something of a chilling effect to the board, as your opponent must now evaluate whether or not it is ‘worth it’ to give you a creature in order to play one of their own.

The first example of type we find is the Opal Caryatid, a one-drop enchantment that becomes a 2/2 Soldier. Play one early enough and she’s almost assured of ‘hatching.’ So it is as well with the Opal Gargoyle, a 2/2 flyer once released for only two mana. Another key card to the deck, you find three of them here as well. Finally, the deck’s other rare appears here in the Opal Titan, which becomes a 4/4 Giant. In addition, it gains protection from whatever colour(s) of the creature spell that awoke it were, ensuring that unlike the Voice of Grace it’s always colour-relevant.

Moving on from the sleeper package, we find more conventional fare in the area of creature augments. A mainstay of White Weenie decks, this sort of function would eventually be assumed by equipment, but at the time of Urza’s Saga that artifact subtype was a ways off. Still, in the Endoskeleton we see the somewhat inelegant ways in which equipment was originally concepted- an artifact that granted a bonus that could stick around by not being untapped, in this case +0/+3. Unlike most equipment, the Endoskeleton’s bonus could be delivered at instant speed, though, giving the deck further ability to complicate blocking assignments for an opponent.

The deck carries another creature-minded artifact in the pair of Dragon Bloods, which simply convert mana into +1/+1 counters. Not to be outdone, the enchantments get in on the action with a full playset of Brilliant Halos. The Halos feature the “return to hand from play” mechanic that many of the auras of this time do, an attempt to offset the inherent card disadvantage found in playing auras in the first place. It’s a decent bonus (+1/+2) at a fair price, and this card will take on a workhorse aspect in this deck. Rounding things off here is a single Serra’s Embrace, which grants another solid power/toughness boost in addition to vigilance. Unlike the Halos, it’s strictly a one-shot enchantment, though if it dies you can always retrieve it with the Monk Idealist.

Removal is abundant, though largely conditional. Two Clears and a Disenchant give you some reach against noncreature threats, while Pacifism is your most effective broad-brush creature stopper. The last two cards in this class can also solve opposing creatures, but can take a little finesse. Humble makes any creature a 0/1 until end of turn, and can let even the least of your creatures take down most anything thrown against you. Waylay gives you a trio of 2/2 Knights that are removed from the game at the end of turn, meaning they’ll only be good here on the defense. Still, they can take down a 6/6, or even offer exceptional value by trading out with a trio of 2/2 attackers.

The last card of the deck is the aforementioned Barrin’s Codex, designed to help you refill your hand after depleting much of it flooding the board with cheaper creatures and enchantments. The Codex can draw you a load of cards, but it also has a bullseye on it the moment it touches down. Costing four mana to pop for cards, it’s a hard thing to protect in case your opponent tries to do away with it, since keeping four mana open can greatly retard your development. Still, those times you manage to make it work can often help swing you the game.

Unlike the land-bloated Tombstone, Sleeper runs a fairly lean ship. It packs in only twenty-two land, and four of these are Drifting Meadows. Can the White Weenie/enchantment support deck put some wins together? We’ll find out in the conclusion of the review.