If you’ve been with us throughout 2012, you may recall we’ve dubbed 2012 to be the “Year of Firsts,” covering events such as the first set with Theme Decks (Tempest) to the site’s first full Block review (Mirage)- itself a first as the first set to have digital-only Theme Decks designed for it. As it happened, things took an unpleasant turn as we tackled the sunlit world of Lorwyn. Although we had high hopes for the first ever set that contained five Theme Decks, it was not to be- the set overall failed to live up to expectations for a number of reasons. Today’s set finds itself notable for having accomplishment on both sides of the ledger- many successes, sure- but also some very grave failings.

Released in October of 1998, attendees of the Urza’s Saga’s prerelease were treated to the first-ever foil card, the promotional Lightning Dragon. Although it would be another set before they were introduced in the form we know them today (randomly in booster packs), it was a noteable milestone in the game’s evolution. Another new approach in the set concerned the set’s narrative arc. Although the last block (Tempest) had kicked off the game’s first major multi-set story with the Rath Cycle, picking up where the ‘prologue’ of Weatherlight left off, Urza’s Saga would take the game back in time as a sort of prequel. This in itself was nothing unusual- even then fans of the game were well accustomed to different sets having new and unrelated stories. But for Urza’s Saga, there was a twist- rather than having a story play itself out on individual cards like a comic book (as was the case with Tempest block), Urza’s Saga laid its chapters out by colour.

Green kicks things off illustrating the conflict between Urza and Mishra in the sylvan land of Argoth, as depicted in the book The Brother’s War. These events served as another prequel as well, for the Ice Age expansion. From there, Urza’s ill-fated attack on Phyrexia unfolds in Black, while his recovery and recuperation from the price of failure is featured in White, on the plane of Serra.

Unfortunately, as they have a habit of doing the Phyrexians followed Urza to Serra and so a dark corruption set in. Urza was not able to save the plane, so instead he collapsed it into a powerstone to seal off the Phyrexian threat. From there he set up an academy on Tolaria, the events of which are depicted in Blue (including another “prequel” tale, this time of the child prodigy Teferi, who would become a prominent figure in Mirage). Finally, Urza’s recruitment of allies and reinforcements on the plane of Shiv is depicted in Red, as he looks to broker peace and cooperation between Goblin and Viashino with a Thran power rig hanging in the balance. This is all the briefest of synopses, of course, but the full tale is recounted in the book Planeswalker.

As to be expected, Urza’s Saga also introduced a number of innovations to the game. Of the four new mechanics, only one of them has ever been reprinted (not counting Time Spiral block, where virtually everything got at least a wink and a nod), and that mechanic serves as the focus to today’s deck. Tombstone asks an intriguing question- what if everything in the deck had cycling and you could burn through your library to find what you wanted? And what if we threw in some recursion to make sure that what you cycled didn’t go to waste? As we’ll see, that answer comes in three colours. 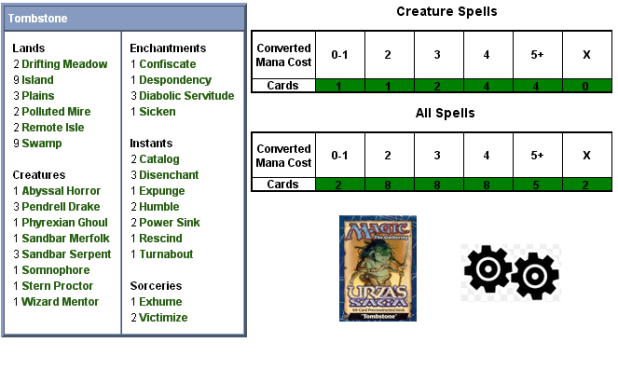 Of course, as phrased above that’s a bit of a false question, for not everything in Tombstone has cycling- though you might well be forgiven for feeling so. A full seven of the deck’s dozen creatures are given the ability word, letting you handily replace any draw that doesn’t fit your plans at the moment. Take, for instance, the eternal question of what to do with those 1/1’s. Unless they have an ability that lets them retain relevance later in the game (see: Dragonmaster Outcast, Llanowar Elite), the humble 1/1 is in danger of being obsolete very quickly, and you’re seldom happy to draw them later in the game. It’s one of Magic’s enchanting little conundrums- in order to be most relevant, you need the greatest chance of drawing your 1/1 early- but upping the odds by including more by the same token also ups youtr chances of drawing one when you least want to, in the mid- to late-game.

Cycling helps you get around this by letting you flush the card if it’s no longer relevant, such as with the deck’s single one-drop, Sandbar Merfolk. However useful the ability, the Merfolk is a tragic misfit here. It’s not a body you would ever consider reanimating unless under the most dire of circumstances, and it has nowhere near the support it would need to be relevant here (an aggressive curve of other Merfolk with perhaps a Lord of Atlantis or other lord). Still, it makes a superb and easily-grasped introduction to the concept.

Next up the converted mana cost chain is the Stern Proctor. A two-mana 1/2, he too is something of a difficult fit, but here it’s because he’s a colour-heavy creature in a three-colour deck. While Tombstone is a deck absent artifacts, it has enchantments aplenty- indeed, Urza’s Saga on the whole is something of an “enchantments matter” set, something we’ll see in another of the Theme Decks (Sleeper). The Proctor will let you recur some of your more potent single-use enchantments as well as your copy of Sicken should you opt to cycle it and later need it back.

Moving up to the deck’s three-drops, we find another uncomfortable option here in the Phyrexian Ghoul, a creature perhaps better known to some as the Nantuko Husk or Vampire Aristocrat. Ordinarily creatures like this do their best work in creature-heavy decks where you tend to have a greater chance of fodder laying about, but recall that Tombstone is fairly creature-light. The Ghoul may make a fine one-shot closer, but you’ll be lucky to get much more out of it than that. Here also is a Wizard Mentor, continuing the trend. The Mentor has a very useful ability of Unsummoning one of your own creatures at instant speed, and you’d expect such a creature to be given a generous supporting cast of enters-the-battlefield creatures. Sadly, Tombstone has but one of these- and it’s a six-drop, to boot. Given that, it’s hard to escape the conclusion that the deck is something of a Island of Misfit Toys.

A trio of Pendrell Drakes offer the first solid creature support the deck seems to have, clocking in at four mana. At this mana cost, cycling is more about flushing an early appearance rather than a late one, but these 2-power Drakes are some of the deck’s most reliable workhorses, particularly considering their evasion. We also find the deck’s first rare here with a Somnophore, which left unchecked can lock down your opponent’s best creatures and pry back their defenses.

Finally, at the top of the curve we find one last occurrence of consistency with the Sandbar Serpents. Although five mana for a 3/4 without evasion is never destined to turn heads, it’s the most robust body you have available to you. As with the Drakes, the cycling here is to prevent you from essentially mulliganing yourself if you happen to draw them in your opening grip, and as we’ll see there are a number of ways to get them back if discarded. The final option here is the Abyssal Horror, a rare six-mana 2/2 that has a Mind Rot attached to it. The card’s saving grace is that it has flying, meaning it will have relevance even after the forced discard- a tender mercy for the (joint) most expensive card in the deck.

Given the number of cards it has to work with, the noncreature support package of Tombstone is remarkably broad. As you’d hope, the removal suite is fairly solid, although you get few easy options here. An Expunge is the most lethal of the bunch, but it offsets the cost of its cycling with some targeting restrictions. You should almost always have targets for it, however, unless you happen to be up against a mono-Black ‘robots’ deck- but then, in that off chance you can always simply cycle the card. Black also offers a Sicken, another cycling card that can either dumb down a nuisance threat or outright kill any x/1 creature your opponent has, like a utility body with a disruptive special ability.

White contributes a pair of Humbles, which are not removal in and of themselves but can act as ersatz removal on the defense. Simply block the threat, Humble it, and voila, problem solved! Not to be outdone, Blue lets you simply steal a permanent outright with Confiscate, meaning you’ll be able to steal anything your opponent plays that sticks. Although useless against things like creature auras (since it doesn’t move the enchantment but simply changes the owner), if you can’t find anything worth stealing on the other side of the table your opponent is already quite likely losing! A Despondency is the Black member of the type of spells that Rancor hails from (though it came a set later), letting you blunt a creature’s offensive power over and over until dealt with. Finally, a Rescind gives you the cycling version of an Unsummon, but one that similarly affects permanents rather than just creatures.

For artifact or enchantment removal, White pulls its weight here with a trio of Disenchants, back when White had access to that effect (it’s since been moved to Green). Other expected effects are found with some Blue countermagic (a pair of Power Sinks), and a bit of card draw with a couple of Catalogs. There’s also a Turnabout which stands rather alone, but can help open up your opponent’s defenses for an alpha strike or stall out their land to buy yourself a turn of peace.

The last group of spells are your graveyard recursion options. A trio of Diabolic Servitudes, reprinted in the final Premium Deck Series offering (Graveborn), give you anything in your graveyard back again, and even returns to hand if that creature dies. Victimize lets you get two creatures back to play, but costs you a living one in the bargain- a good use of the Sandbar Merfolk. Lastly, Exhume is the cheapest option you have, but it has the added drawback of letting your opponent recur one of their threats as well. Of course, if you’ve managed to cycle a Drake or Serpent, you might well come out ahead in the deal.

Throw in two copies of each of the three cycling lands (Remote Isle, Drifting Meadow, and Polluted Mire), and you’ve got yourself a deck! Check back n two days’ time when we put the deck into the pit against another of its contemporaries and see how it holds up!