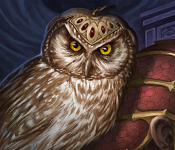 This is it! Our final Planechase 2012 game, with me piloting Night of the Ninja. I’ll be looking to sneak my Ninja saboteurs through enemy lines to give my deck the best chance of victory. Lining up against me are Sam to my life, who is playing the cascade-centric Chaos Reigns. Jimi, on the right, has shuffled up Savage Auras. Who will be the last planeswalker standing?

With Jimi leading things off, she flips over Chaotic Æther once we’ve kept our hands and are underway. As the rules of Planechase prohibit leading off with a Phenomenon, the Aether goes to the bottom of Jimi’s planar library and the next card revealed is our first destination- Astral Arena. Our first turn is spent playing land and rolling dice, and while we hit the Chaos effect a time or two it has no impact (no creatures).

Now turn 2, Jimi plays another land, rolls a blank on the planar die. For my part, I deploy the game’s first creature, an Augury Owl, which helps me move my Ninja of the Deep Hours to the top of my library. After rolling a blank, it’s over to Sam. She trots out an Armillary Sphere, then rolls Chaos to kill my hapless Owl.

Next turn Jimi continues to develop her manabase, then rolls the planar die three times. Although she hits another inert Chaos, we’re staying put at the Arena. Back to me, I lead things off with a heft of the die and come up with the Planeswalker symbol. Flipping over the top card, I reveal Bloodhill Bastion, a Plane filled with very nasty surprises indeed. Next I play a Baleful Strix, drawing a free card before swinging in with it on Sam for 2. Lastly, I drop a Dimir Aqueduct and call it good. Sam cracks her Armillary Sphere, rolls uselessly a couple times, and ends the turn. 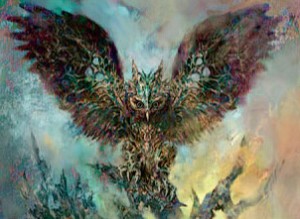 So far it’s been a fairly tame start, Jimi plays her first beater with a turn-4 Armored Griffin. Thanks the the Bastion, she swings with it immediately for 4 on me, then takes her free roll to no avail. I then deploy the Glen Elendra Liege, letting me surge in on Sam with a 7-point swing, since the Strix gets +2/+2 off the Liege. Rolling the planar die, I come up with Chaos which allows me to flicker the Baleful Strix, letting me not only draw another card but also giving me a very effective defender against most anything Jimi might produce. Down to 11 life, Sam tries to solve the Liege with an Erratic Explosion, but when she reveals another Armillary Sphere the Liege breathes a sigh of relief. On the upside, Sam manages to planeswalk us away from the Bastion, revealing a Mutual Epiphany. After we draw our four cards, we’re off and running to the Hedron Fields of Agadeem. Sam discards three cards  to get down to seven(two lands and a creature), then ends her turn.

Now turn 5, Jimi turns the game on its axis when she turns the Griffin from nuisance to threat with a Felidar Umbra, Rancor, and Spirit Mantle. Just like that, her 2/3 flying, vigilant Griffin is a 5/4 flying, vigilant, lifelinking, protection from creatures, trampling beatstick. It’s a terrible gamble to put so many eggs in a basket, but by now we’re all quite a bit more experienced with how little removal the Planechase 2012 environment carries, and I’m now on a rather short clock. She sends in the Griffin to put me down to 11, going up to 25 life in the process. Back to me, I swing in with my Strix and Liege in the air on the defenseless Sam, trading out the Strix for the Ninja of the Deep Hours thanks to ninjutsu. Down to 6 life, Sam lands a Noggle Ransacker– not great, but something. We each draw two, then discard a card at random from hand. Sam loses a Rivals’ Duel, while I pitch a Tormented Soul and Jimi a Silhana Ledgewalker. She then planeswalks us to the Grand Ossuary, tries another roll (blank) and ends turn.

Jimi opens turn 6 with a Ghostly Prison, then attacks me again for another 5. On the third die roll, she sees us head to Aretopolis, a lifegaining plane which promises some relief to Sam and me. Jimi’s now at a tremendous 31 points of life, with Sam and I even at a much more dire 6. Back to me, I know that anything I do needs to be in the direction of solving the Griffin, so I retrieve the Augury Owl with Cadaver Imp and replay it. Finding two land and a Concentrate atop the library, I flush all three to the bottom. The lands are useless, and while drawing three more cards off the Concentrate would help, it would take most of my mana to do it. My only hope is to rip something useful on the draw. Although the lifegain of Aretopolis has put me up to 8, time is running short. I swing in on Sam for 5, and she chumps my Ninja with the Noggle to only take 2 points of Liege damage. I roll a blank on the planar die and pass. Sam rolls the die once, and passes, clearly leaving her options open.

Now turn 7, Jimi doubles down on the Griffin with an Indrik Umbra, letting her swing for lethal. I’ve got nothing, and begin picking up my cards. Sam plays an Enigma Sphinx, cascading into a Kathari Remnant which in turn cascades into a See Beyond. It doesn’t matter, as Jimi next adds a Mammoth Umbra to the Griffin. Unable to block it, Sam’s right behind me on the way out.

Although nobody likes losing, it’s always heartening to see decks perform well against one another, and with everyone at the table having gotten a taste of victory these past couple of weeks it looks like Wizards did a fine job in making sure the decks had a fair bit of balance to them. In this case, Jimi was able to live the dream of assembling the perfect Robeast and keep it up to win the game. Sadly, dawn broke early for Night of the Ninja, and I just wasn’t able to outrace her.

Luckily for me, we actually play two games with the decks, with the first one being our “pregame friendly” where we get acclimated to what we’re piloting and just have some fun with it. In our casual opener, the Ninjas did all I asked of them. The deck was able to give me a decent array of hard-to-block bodies to cheat my Ninja into play, and the Ninja turned in a strong performance.

For all that, it’s stillhard to escape a fairly bland and generic feel with the deck. The Ninja look cool, but at the end of the day all you’re really doing is getting a little extra value while doing some of the most basic and fundamental actions in the game: draw a card, force your opponent to discard, kill or bounce a creature, or scrub their graveyard. There were some touches of spice when a small tribal Ninja element was added, such as with Higure, the Still Wind and Walker of Secret Ways, but it wasn’t enough to spice up the plate. Credit has to go to the deck’s unique cards like the Silent-Blade Oni to bring a fresh coat of paint to the old mechanic. 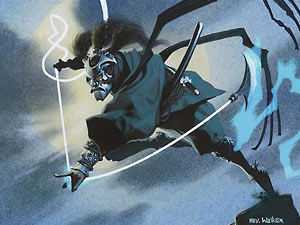 Up until we posted a poll asking whether or not we should play with the Planes in our testing, running the original Planechase decks against one another in a duel without the Planes seemed like the right call. With the benefit of hindsight, it’s one we now wish we’d done differently. We’ve had an absolute blast playing this format, and regret not having experienced the first batch of Planes to remark on the progression of the design. That said, most of the Planes included with these decks felt like a bit of a miss when played in conjunction with the decks themselves. We’d have liked to have seen a little more consideration of the actual decks go into the design of the Planes, but two sets in it will be interesting to try and assemble Planar decks to go with a custom build. The format is certainly maturing. Hopefully this time we’ll see more than the rather paltry number of promo planes we saw the last time around.

Overall, this is a great product to pick up to add some spice to your gaming table. Unless one of the decks catches your eye or like us you’re a collector, you might instead look to pick up the Planes as singles and save yourself some money. A quick look at Star Cirty Games shows most checking in at the $0.99 mark, and like the Commander decks you’ll tend to see a lot of ‘liberted’ Planes as decks get cracked open to get at the new cards within. Although we enjoyed the 60-card decks, none of them really ‘wowed’ us in a way that we’d feel we really missed out if we didn’t get them. Make no mistake, what you’re really getting here are the Planes. And maybe a couple of Shardless Agents…

Hits: Ninjutsu mechanic well-supported with both Ninjas as well as evasive creatures; slight subtheme of enters-the-battlefield creatures combined with ninjutsu to return them to hand gives the hints of a combo engine

Misses: Removal suite is poor, though on the upside some of it is reusable (Throat Slitter, Mistblade Shinobi); ninjutsu mechanic doesn’t quite seem enough to give the deck high replayability